The first part of my life was styled around getting to know God and the Catholic faith. Every Sunday my Mom would wrangle my brothers and I and we would be carted off to St. Ambrose Catholic Church for mass. After mass we begrudgingly sat through 60 minutes of CCD (Confraternity of Christian Doctrine). I was baptized as an infant, received my first communion in the second grade and was confirmed as an adult member of the Catholic church in the tenth grade. Pretty much the holy grail of Catholic events in a normal Catholic child’s life. Today at the age of 34 I haven’t been to a Catholic church in 10 years (a cousin’s wedding) and we stopped attending a non-denominational church nearly two years ago. 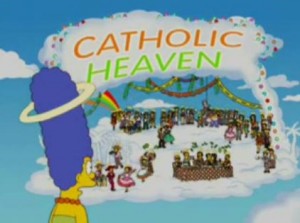 As a child and young adult I was taught that believing in God was simple: pray, behave, attend church and reap the rewards. This simplicity really started to confuse me when my Grandma died from breast cancer after suffering for many years. I had prayed and prayed my little heart out for her to get better, but instead she just deteriorated. At the same time I would hear our local basketball team saying a pretty decent prayer before a game and to my absolute horror they would win. This did not seem fair because surely my Grandma was worth more to God than a basketball game, right? My CCD teacher explained to me something that I would hear millions of times during the next 20 years of my life, “God never gives you more than you can handle.” Yeah, that fixed everything.

My high school years were uncomfortable. I had no idea then, but I had developmental and neurological problems that God himself couldn’t have even tackled. I wasn’t going to church during high school because I was busy trying to fit in. I prayed at night that I would be normal (whatever that was) and then I went to sleep hoping I’d wake up and pop out of bed and be just like my older brother, David. David was never sick, never awkward, shy, uncomfortable or weird and he never said stupid things. I prayed and prayed and prayed. It never happened. I think, however, our basketball team did really well. Go figure. 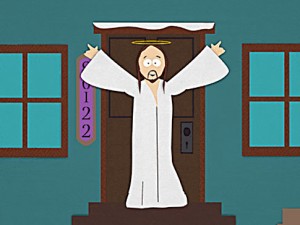 It was after I graduated high school and was in college that my health really began to deteriorate and I realized that I wasn’t going to pray my way out of anything. My parents were killing themselves trying to help me because frankly nothing was helping and I knew we were all separately praying our freaking hearts out and God was just too busy watching PHS basketball to care about anything. Finally, after hearing the phrase “God never gives you more than you can handle” a hundred times too many, I became my own champion and did what God could never do for me, I picked up the telephone and made an appointment with the best neurology clinic on Earth. God – 0 Me – 1.

When I met Mr. MVP ten years ago my health still wasn’t perfect and if you ask him, Mr. MVP will tell you he spent many nights after we were married praying for a cure. We had long stretches of time where we would be in the hospital, the emergency room and then the doctor’s office for follow up. Everyone was miserable, we were all praying, but God wasn’t listening. Modern medicine simply didn’t (and doesn’t) have a cure for me and it did not matter how tired, how scared and how religious we all were, we just had to move forward. I stopped praying for God’s help and started researching the hell out of everything and once again became my own best advocate. 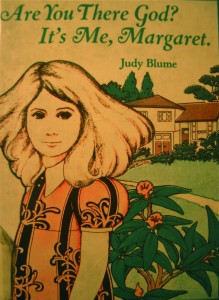 Today, my health is still far from perfect, but I haven’t seen the inside of an emergency room in over two years which for me is monumental. I stopped praying as well. When my Grandma died last November I didn’t pray for her to get better because I knew that logically progressive supranuclear palsy is not something a person recovers from, so I spent as much time with her as I could and thought about her in the most positive way as possible in everything I did. Today I believe all my grandparents are currently enjoying a blissful afterlife in Nirvana. Some of my grandparents were Catholic and some were Methodist, but I honestly don’t care. God did absolutely nothing for any of them, so for me, in my brain, putting all of them in his Kindgom just rubs me the wrong way.

If Mr. MVP and I have children of our own, we will let them decide their own religious affiliations when they are old enough to sort through the confusing mess that is religion as a whole. Until that time there won’t be any CCD classes or regular mass, but instead simple lessons on right and wrong and open and honest age appropriate discussions about how to be respectful of all other humans. I’d like to think our life experiences will help us teach our possible future kids that their best advocate is themselves, because I don’t want any kid of mine to learn the hard way that God really loves his basketball.