Coffee is serious. I don’t make coffee, I brew it. The entire process from start to finish takes about ten minutes and I’m incredibly picky about my beans. I drink a lot of decaf coffee because caffeine screws with my medications, but I only enjoy whole bean decaf coffee that has been water processed. Yeah, it gets complex.

When I first started to brew my own coffee I used a Keurig. The very first Keurigs were reliable, fast and had reusable filters so they were not hard on Mother Earth. My first Keurig actually worked for a good year before I started to have big problems. I called Keurig and their solution was to send me another brewer and have me throw out the old brewer. This seemed really terrible to me, so I put the old brewer on Freecycle and used the new brewer for about a month until it too stopped working. Keurig once again wanted me to toss the old brewer and start fresh with a new one. Not only was I getting a little worried about the crazy Keurig lady title I probably had on Freecycle, but my coffee was starting to taste like water. I dumped Keurig. 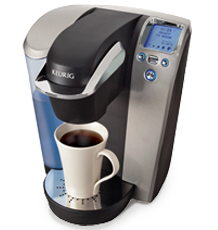 I decided on a French Press because everyone else was using a French Press. I liked that it didn’t have any mechanical parts that could fail and it was ridiculously easy to use. My morning cup was pretty decent, but I was ultimately not a fan of the coffee dregs that always ended up in my brew. I was wasting a lot of coffee because the bottom half of the carafe was undrinkable. My French Press was also a pain in the ass to clean. Within a year I broke up with French Press too. 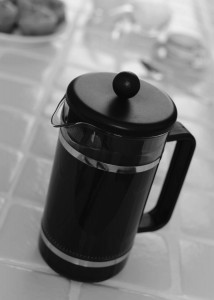 My current method of brewing is a glass handled Chemex, and my coffee has never tasted so good. Chemex has been around since 1941 and is a family owned company from Massachusetts. I use a glass Chemex kettle, which gives me amazing water that doesn’t taste metallic and Chemex filters which make for simple and quick clean up. My Chemex carafe is dishwasher safe, doesn’t have plungers or mechanical parts and I’ve never seen a speck of coffee grounds in any of my cups. 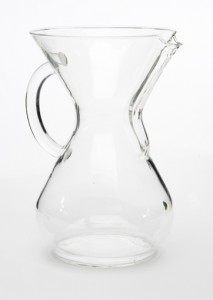 My favorite beans, surprisingly, come from Sam’s Club. Their decaf coffee is water processed and is freaking delicious. It’s dated and vacuumed sealed. I use an inexpensive coffee grinder from Capresso that we purchased about a year ago. It does the job perfectly. My extra beans go in a hugs and kisses container where they will stay fresh for up to 6 months. 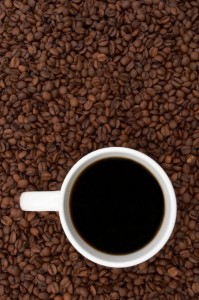 My morning cup of coffee might get a little complex, but it is completely worth it because it tastes and smells amazing. I feel for the masses of people who are still using Keurig machines to possibly pump out substandard, watered down, flavorless coffee. It’s a truly sad state of coffee affairs. I also have pain in my heart for those poor misguided souls who are struggling with their French Presses day after day. I know who you are because I see you picking grounds out of your cup. I can help you be much happier with your morning joe and all it takes is an extra ten minutes and one coffee centric company.