This week I’m dedicating my blog to mental health. I think my brain is pretty decently balanced, considering what I endure on a daily basis, but I’ve known people who, quite frankly are completely bonkers. 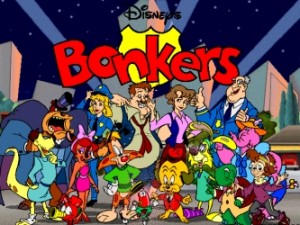 No, Disney, The Other Bonkers.

Today I’ll be talking about the sociopath. Google defined it as:

To start with, if you’re wondering if you are actually a sociopath, you’re probably not. Sociopaths don’t feel guilt or shame, so worrying about your sociopathic tendencies would rule you out from the start. Sociopaths are highly intelligent, well spoken, extremely charming, and driven to win. Usually, these people are skilled liars who are incapable of apologizing. Sociopaths are also unable to love. 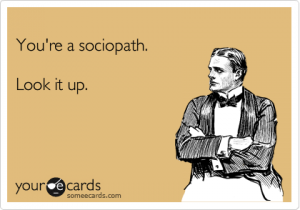 There are lots of tests online to evaluate whether or not a person might not be a sociopath, but those immediately rule out an actual sociopath. One test, on OK Cupid of all places, is actually pretty interesting. Considering I am not a good test taker I scored 16% sociopathic which is far below the normal of everyone else who took the quiz. I was deemed Healthy by Ok Cupid, which made me feel a whole lot better.

So, sociopaths make up approximately 4% of our population and some think that sociopaths are making all of our economic and political decisions, but I’m more concerned about the cats. I’m terribly allergic to cats, which really are disgusting little creatures, that I bet you didn’t know are also sociopaths. Cats who are not required to stay indoors will kill more than they need, go places they aren’t invited,  and chase things they are not supposed to. Cats are furry evil sociopaths encouraged by horrible humans.

Today if you’re out and about and you meet a new friend who reminds you of Dexter Morgan, you may want to think twice about the new relationship. Sociopaths are sneaky. Romantically, I really cannot help much, but there is a whole blog dedicated to the issue because apparently it’s a gigantic problem. Just remember that in general dogs are way better than cats and there is a pretty good chance you are going to have interact with one of 12 million sociopaths in the world, so arm yourself with the facts, stay calm and just stay as far away as humanly possible.