Today I had a great discussion on pathological liars lined up, but then I heard this amazing story on All Things Considered about narcissism. Seriously, NPR rocks. Anyhow, suddenly my Chrome tabs were full of questions on narcissistic personalities, a narcissism test, the impact of narcissism on teens and unicorns. Wait, that last one is just for me. Back to Kanye. 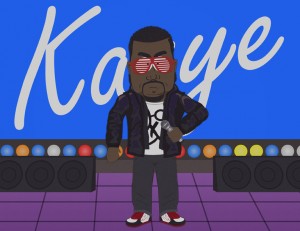 Narcissistic personalities expect to be noticed and be in charge. They desire constant attention. I took a narcissism test and scored a two. A typical narcissist would score over 20 and interestingly it was pointed out that a celebrity would score between a 12 and 15. I got one point in authority or leadership and one point in entitlement or expectation. Essentially, the test was telling me I am a bossy and power hungry non-narcissist. Honestly, after taking this test I felt like I needed to work on my self esteem. 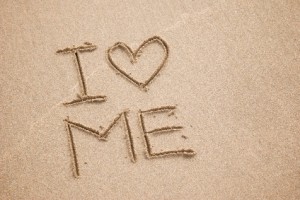 Where I went next was the darkest, most horrible corner of the Internet: Donald Trump. When I say I loathe this man, I’m actually saying a word 100 jillion times worse than loathe that has not been invented yet. Mr. Trump is terrible and he is a narcissist. On every single building Donald owns he plasters his name in humongous gold letters, he fiddles with his hair constantly, he has the ambition to run the United States even though nearly everyone hates him, and he talks about himself in the third person. Donald bullies people on Twitter, television, and he even bullied President Obama, but he doesn’t care because he adores himself. Donald Trump is a narcissistic fool. 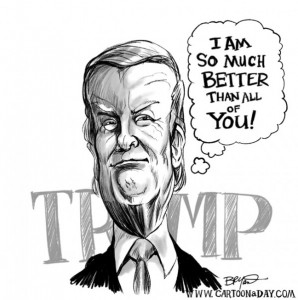 What led me to narcissism in the first place was music. I am not a music fan, which is a theory and practice all so complicated and mixed up that it deserves a blog post of its own, but it also means I don’t know a lot about pop music. Pop music apparently is incredibly narcissistic. For the first time in my life I listened to an entire song by Justin Timberlake, which I have to say I could not understand. I had to look up the lyrics. So, I actually like Mr. Timberlake. He is a gentleman. He is always appropriately dressed and well behaved. He is a fantastic role model and he is hilarious. His musical alter-ego is a narcissistic twit. I don’t need Justin to bring “Sexy Back”, I’m doing just find by myself thank you.

Maybe deep down we are all a little narcissistic. It could be that it’s the hidden Kanye in all of us that wakes us up in the morning and moves us to start working. As long as Donald doesn’t make it to the White House I think everyone is safe from extreme narcissism for a while.