Home
>
Everyday
>
Thundershirt To The Rescue
Tweet Pin It

I’ve told all of you before that there are days stacked on top of days when I’m not completely functional. This morning when I woke up it was 80 degrees out and by the time I took my oats out of the Rice Ninja and fed Moon Pie, it was 90 and climbing. We’ve been under a heat advisory for a week, which means the average temperature has fluctuated around 100 during the day and 80 at night. I haven’t been outside in five days. Don’t get me wrong, I’m unbelievably grateful that I have what I have, but when I don’t feel good and it’s nine million degrees outside, I start to get cranky. 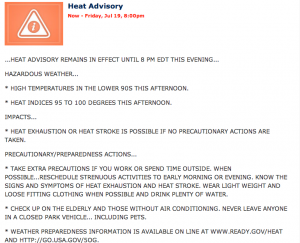 On Sunday afternoon I told Mr. MVP that the weather was changing because I can feel the systems moving around. Weather Underground had our chance of rain at 0%, but I knew the atmosphere was churning. Today, the heat, coupled with the pressure and humidity and Pickle Face and I am waiting for a massive thunderstorm to make its way through. Seriously, they should pay me to forecast the weather. 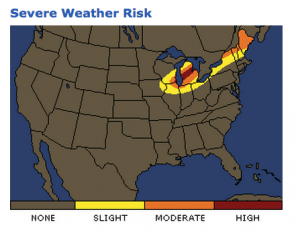 These changing weather fronts not only impact me, but our normally calm and serene Moon Shine panics at the first sound of thunder. She pants, paces and whines and the only thing that will calm her down is if either Mr. MVP or I are right next to her, which is not optimal if I am not feeling well. Blue Magoo has also learned to clam herself down if we turn Pandora on to piano music, but this is another thunderstorm trick that is not helpful when I need a quiet room. Thunderstorms and our dog simply do not mix. 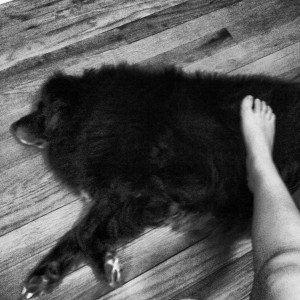 Last week after an entire day of thunder and rain and a Blue so full of anxiety she tried to climb into our bed, I was exhausted and desperate so I called the pet store and when Mr. MVP got home the three of us went and purchased her a Thundershirt. I can tell you I was so skeptical about the Thundershirt that it took me three years to buy one because honestly, there was no way a shirt was going to keep Blue Bell from being afraid of thunder. The thing is, Thundershirt comes with a 100% satisfaction guarantee, so if it didn’t work all we had to do was return it. 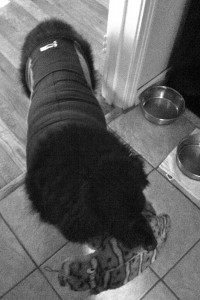 There Is A LOT Of Fur Under There

Blue Bird is a sweet, happy girl, who is terrified of thunder and fireworks. I know when weather is on its way, so I put her Thundershirt on before it gets here and give her time to adjust and calmly settle in. Once the thunder starts, June Bug knows she is safe without needing to be in my lap. The Thundershirt has not cured her of her fear but it has given her the confidence to lay down on her bed with her toy and endure the noise. 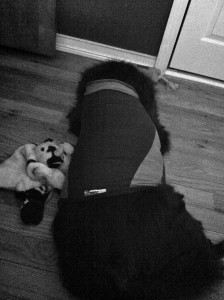