Each Sunday Mr. MVP and I start getting ready for the next week. It’s not rocket science, but it’s a process that makes our week one million times easier. The biggest part of our Sunday preparations is the grilling, which falls on Mr. MVP’s shoulders, but this week I decided to lend a hand so that all of you could see how it’s done. In reality all I did was take photographs and ask annoying questions that my adoring husband patiently answered, so I probably just slowed things down exponentially, but we made it to Monday, so let’s focus on the positive.

A couple years ago we had a large Weber grill, but we found that it was awkward, to store and we didn’t like it sitting out on our deck all the time. Essentially, it was too big for two people. Mr. MVP did the research and found that Weber made a smaller grill, The Smokey Joe Silver, which is about 11 inches smaller than our old grill and it’s portable. We found a great deal on Amazon for the grill and Weber’s Portable Grilling Table and the rest is grilling history. 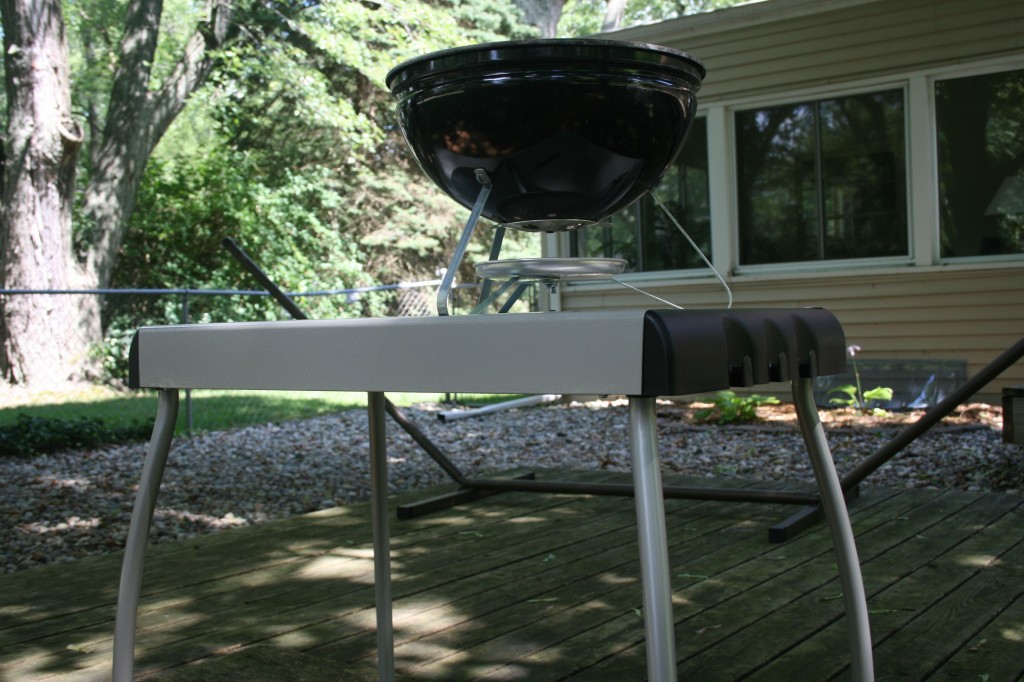 The first thing you want to do is remove the ash from the kettle and basket underneath to allow air to circulate. Simply throw it in the trash. Never throw hot ash in the garbage.

So, this entire grilling process is actually started with charcoal left over from the previous week. Obviously, if you are starting new, just start with new briquettes and follow the directions for re-using charcoal on your next grilling adventure. Anyway. Move all of the old charcoal to one side of the kettle like so: 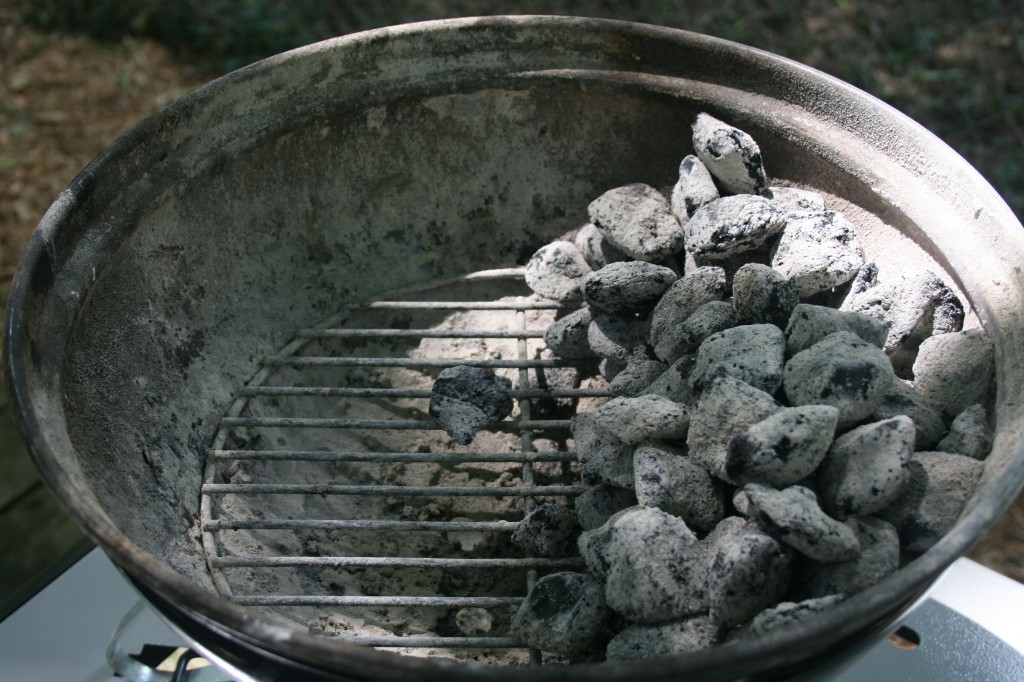 Now, take your new charcoal and line them up on the empty side of the kettle like this: 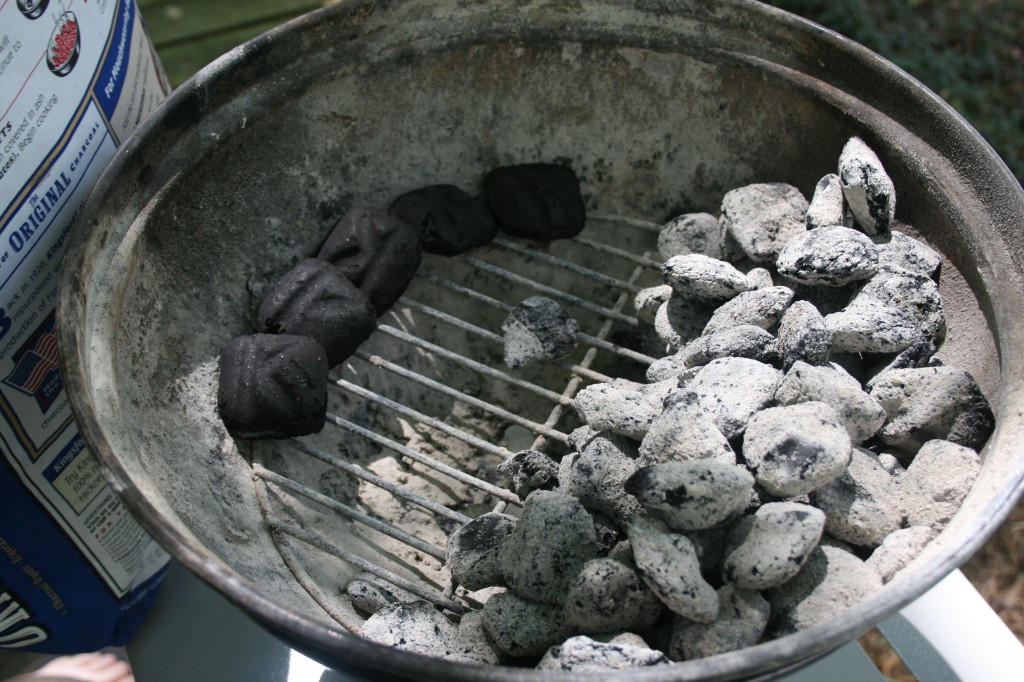 As you add new charcoal in you will want to incorporate the old charcoal with the new charcoal. The whole idea is to create a barrier so the smaller old pieces don’t fall through the grate, but that you also get as much use out of the briquettes as possible. Here is what the layering looks like: 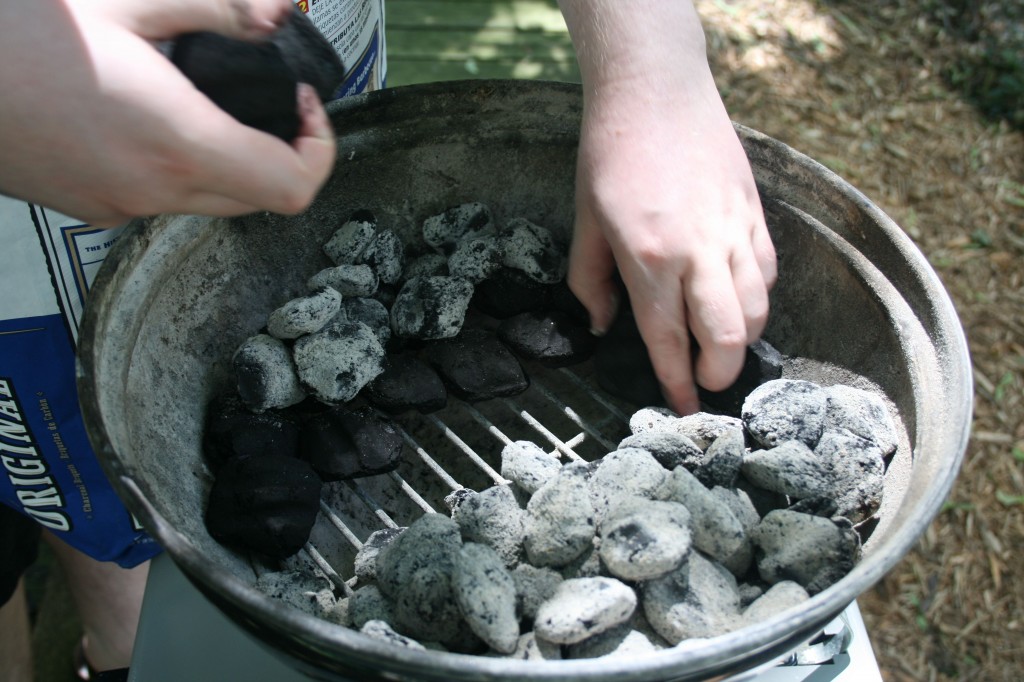 You’re Going To Get A Little Dirty.

Here is what the charcoal looks like when it’s ready for the next step: 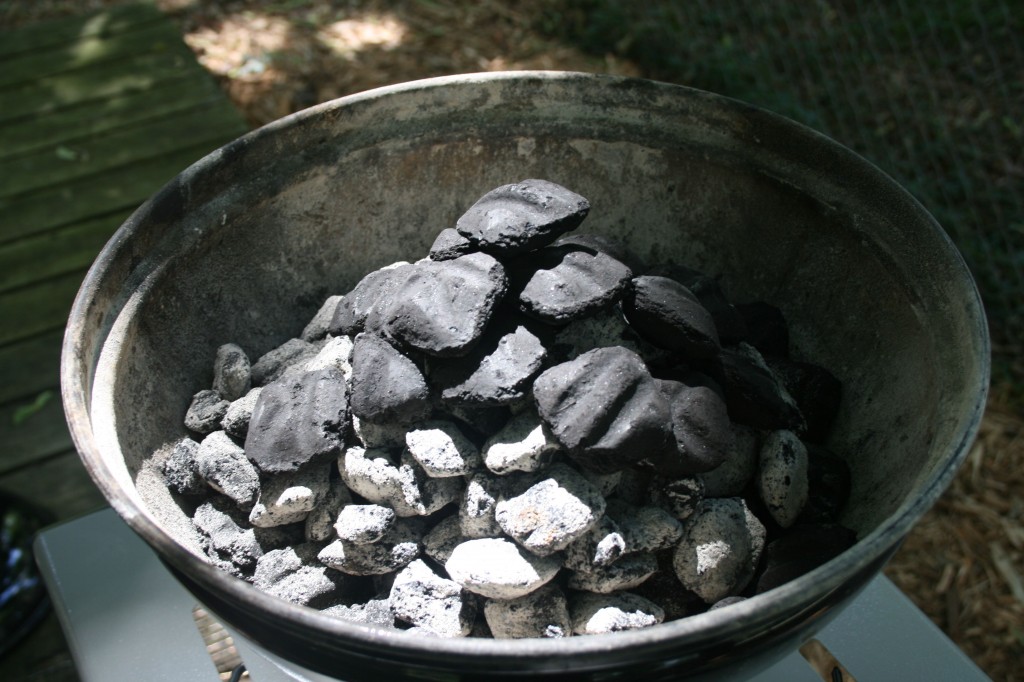 Okay, so now you’re ready to light the charcoal. Mr. MVP uses Kingsford lighter fluid as a starter. Simply squirt the charcoal until the briquettes are visibly wet. I know there is a lot of discussion about using lighter fluid and whether it leaves a taste behind. I am extremely picky and I have absolutely no issues with Kingsford. There is never any chemical aftertaste or smell. It makes grilling simple and quick. There are probably cleaner ways of grilling, but this is the way Mr. MVP does it. 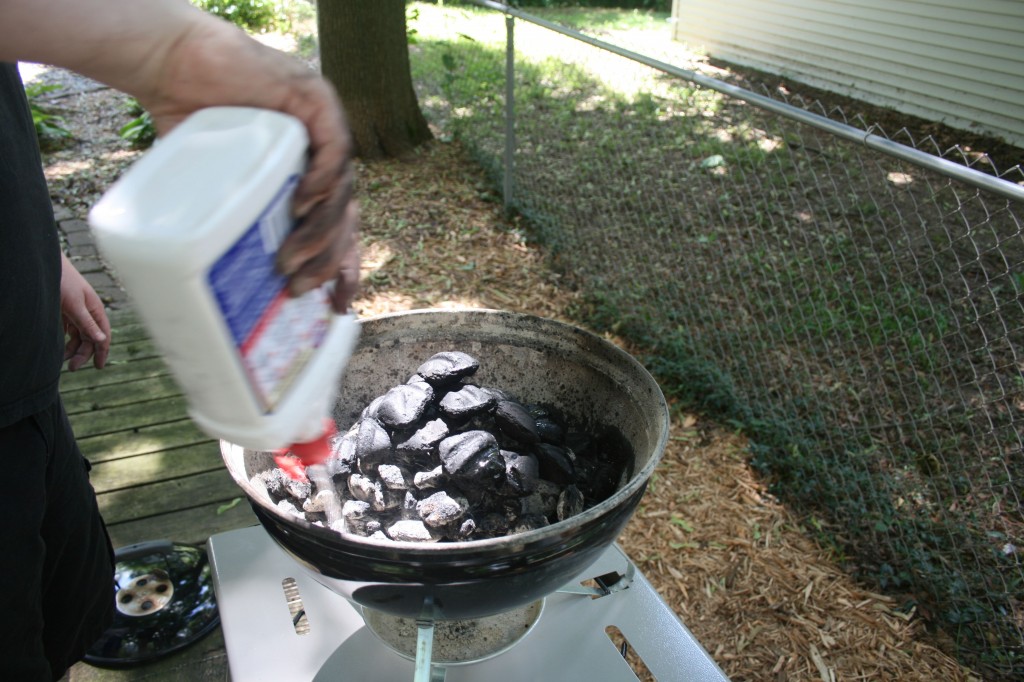 Look At Those Hands.

Now, take your lighting device and light the charcoal. 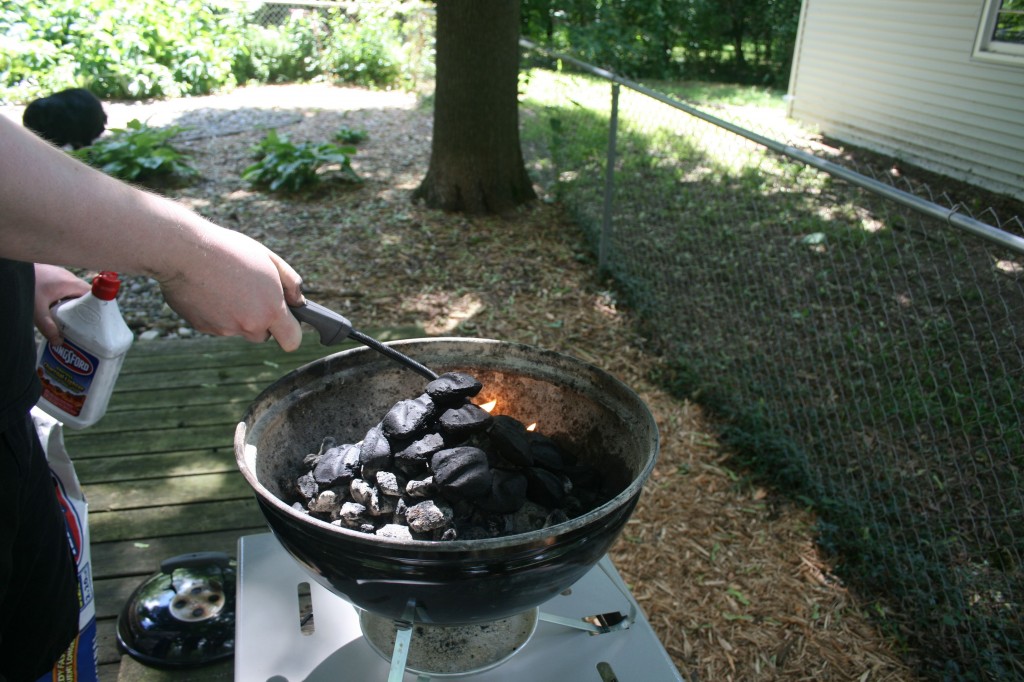 No, seriously, really light the charcoal. 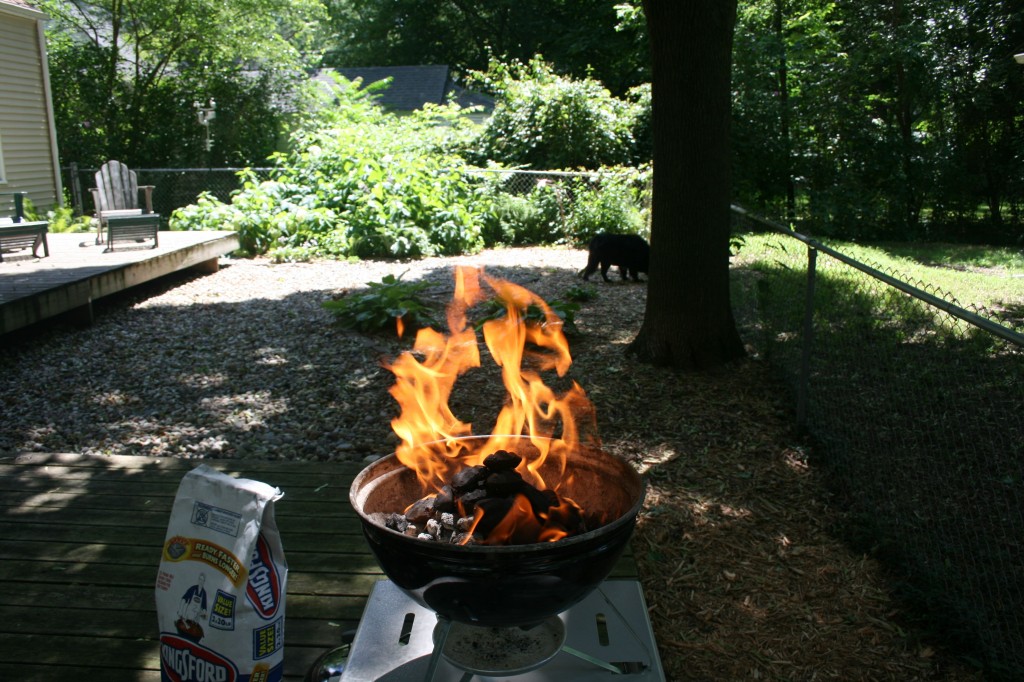 Now you have about 30 minutes before the charcoal is hot enough for the next step. Our four year old neighbor amused us during this step, but there are lots of things you could do. You’re outside, so you could pull weeds, pick some flowers, brush the dog, lay in a hammock, or talk to your 4 year old neighbor about squirrels.

The fire is going to die down, but don’t panic, just keep waiting. 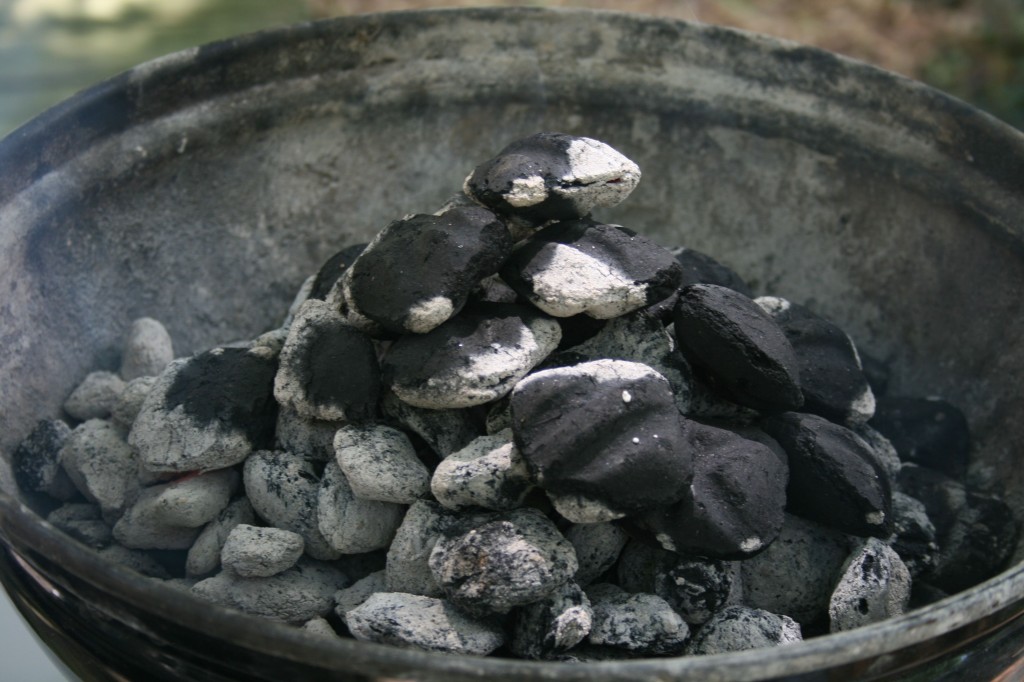 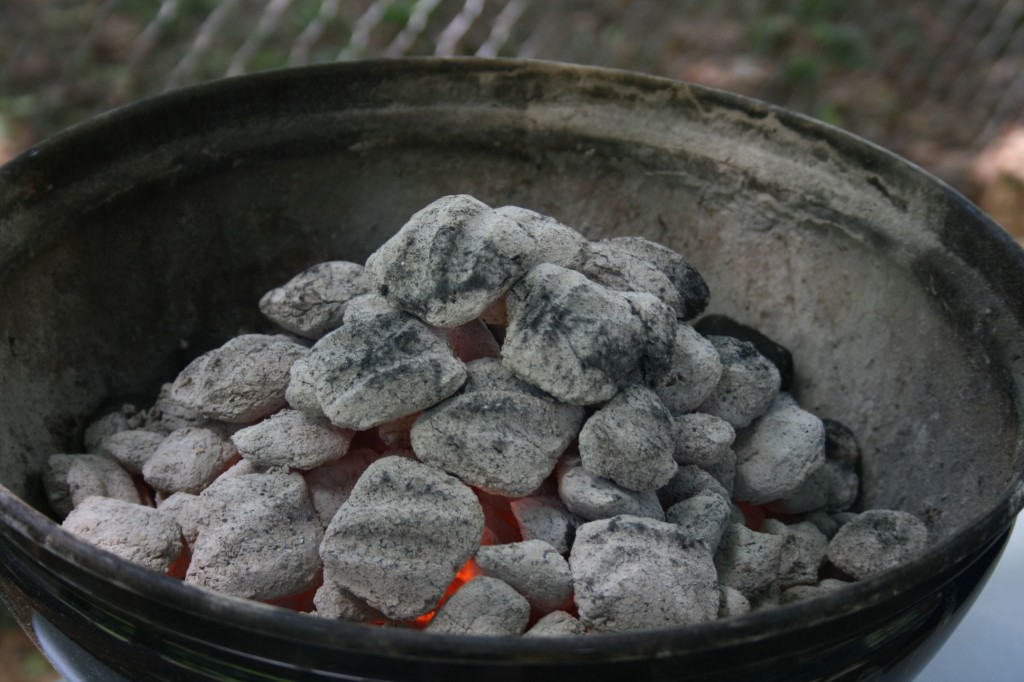 Alright, because I know you have tongs of some sort you’ll need to get those out now. Mr. MVP really likes OXO Tongs because they are easy to use and clean. You and the tongs are going to move the briquettes. Sort of flatten them out. 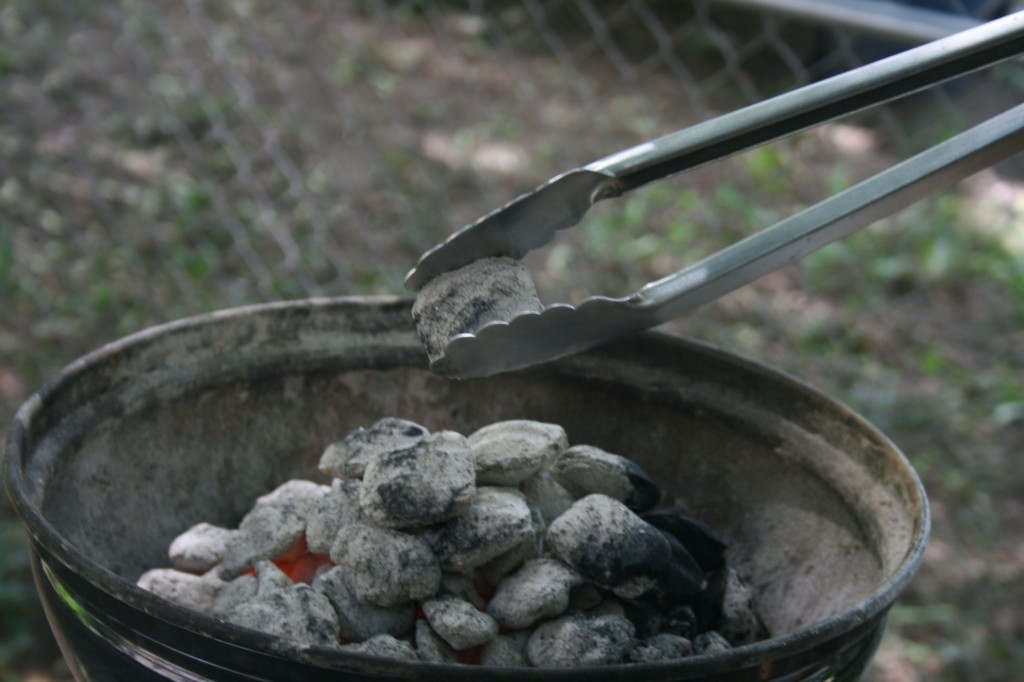 One At A Time.

Take the briquettes from the top of the pile and move them to the sides of the kettle. 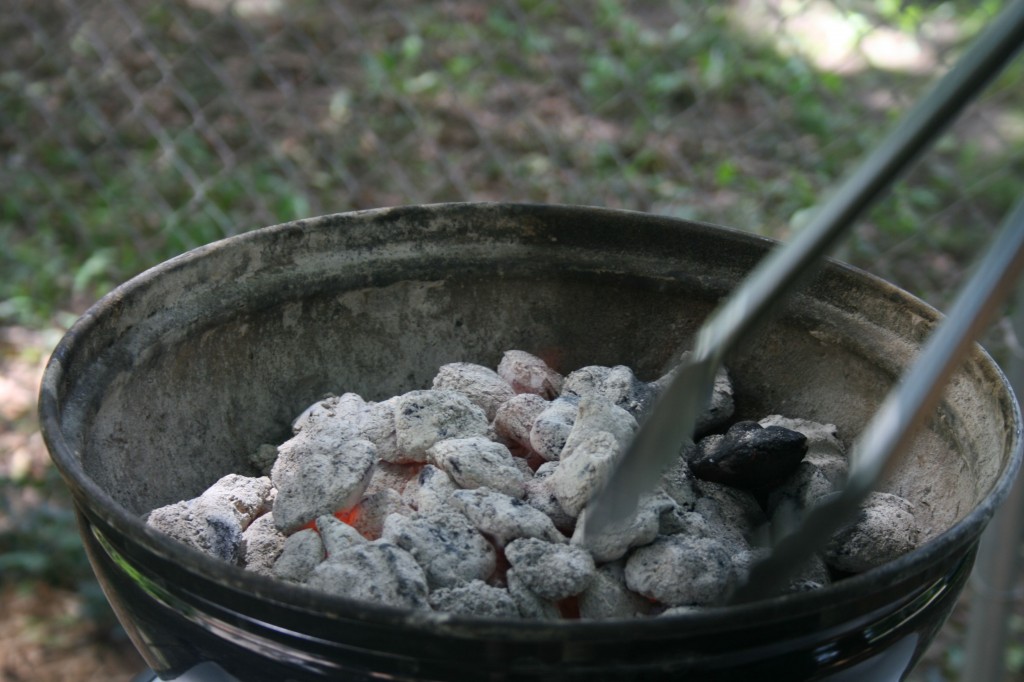 Once everything is flat put the grate on and you are ready to grill. 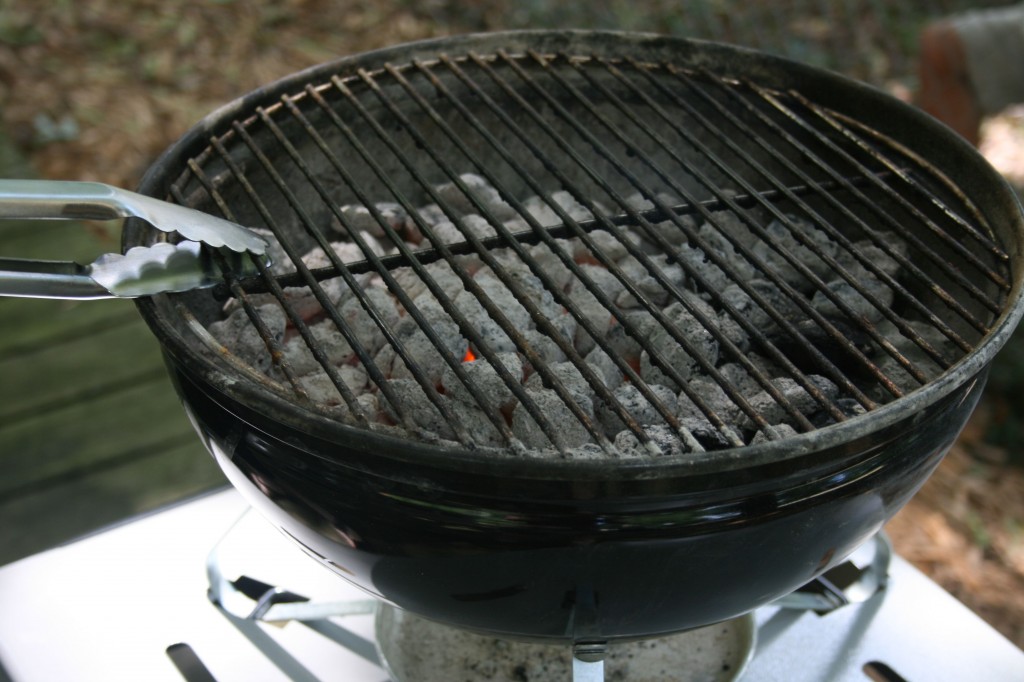 We are cooking boneless, skinless chicken breasts and small tomatoes today, so that is what I’ll be telling you about. We season our chicken with salt and pepper and then put in straight on the grill. It’s that simple. 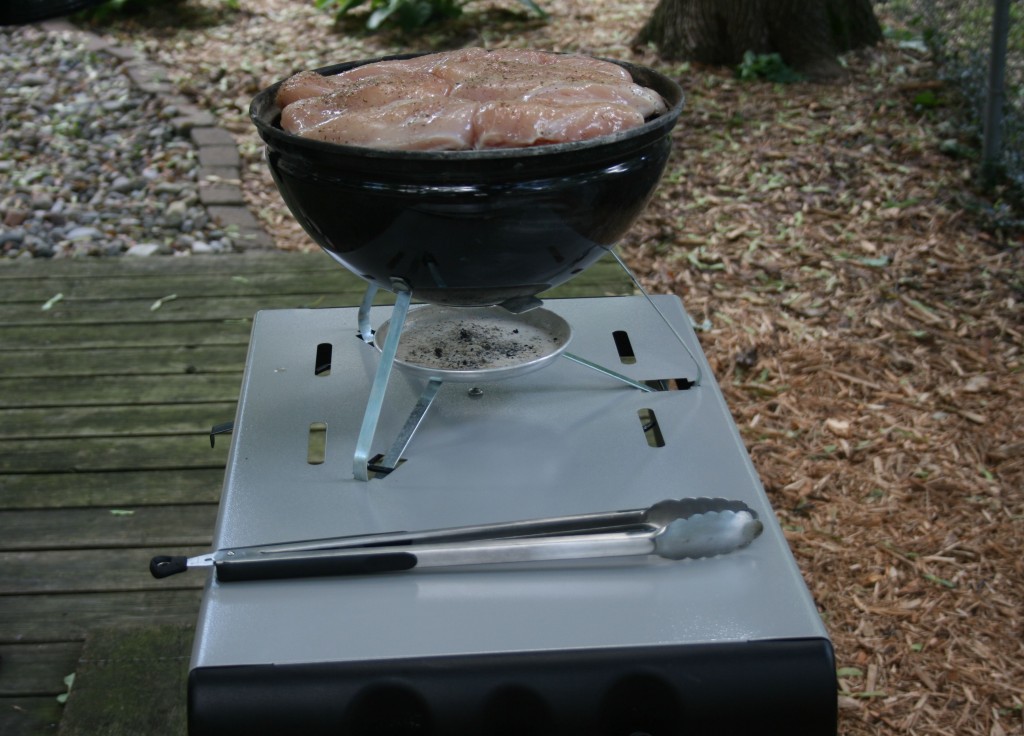 Three important things here. Set a timer for 6 minutes, put the lid on the grill, and take your tongs that have been handling raw meat and wash them. 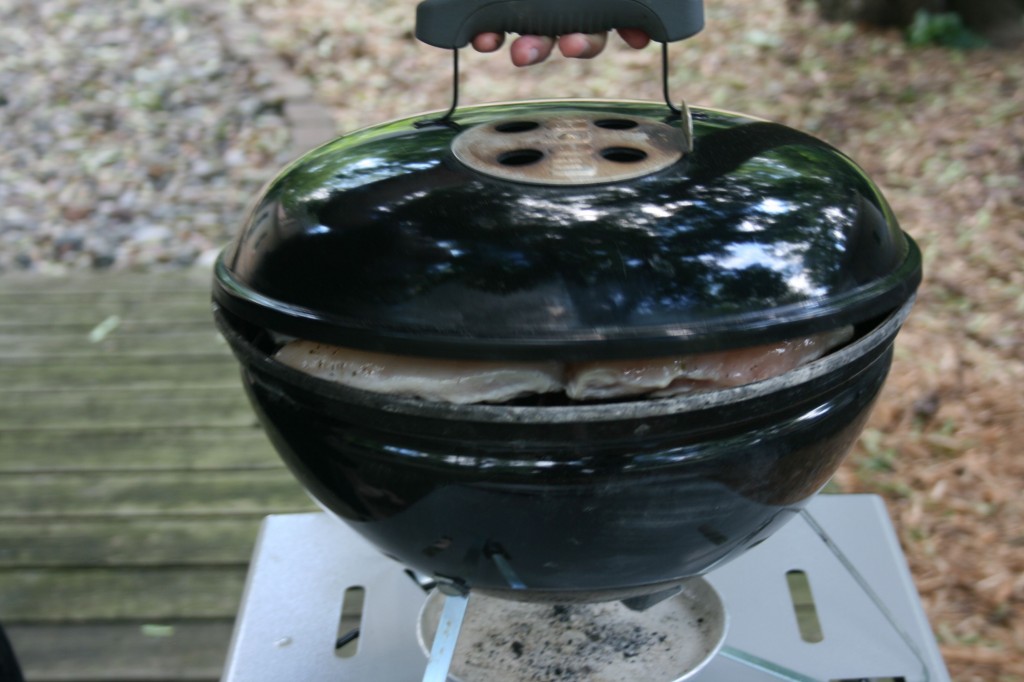 Now, depending on the thickness and temperature of your grill, your chicken should be ready to flip over at 6 minutes. If you chicken is cut very thick or if your grill is not as hot because it’s cold out you might need a minute or two more. Don’t panic, it’s okay. Simply wait and then flip everything over. 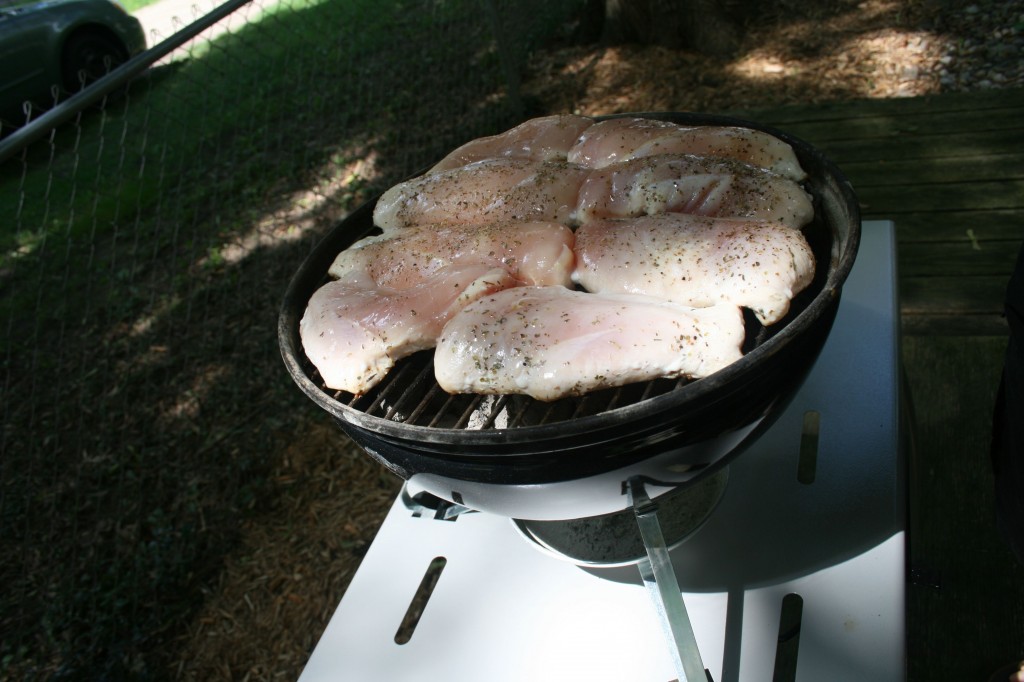 Ready To Be Flipped.

Use your clean tongs and just flip everything over. 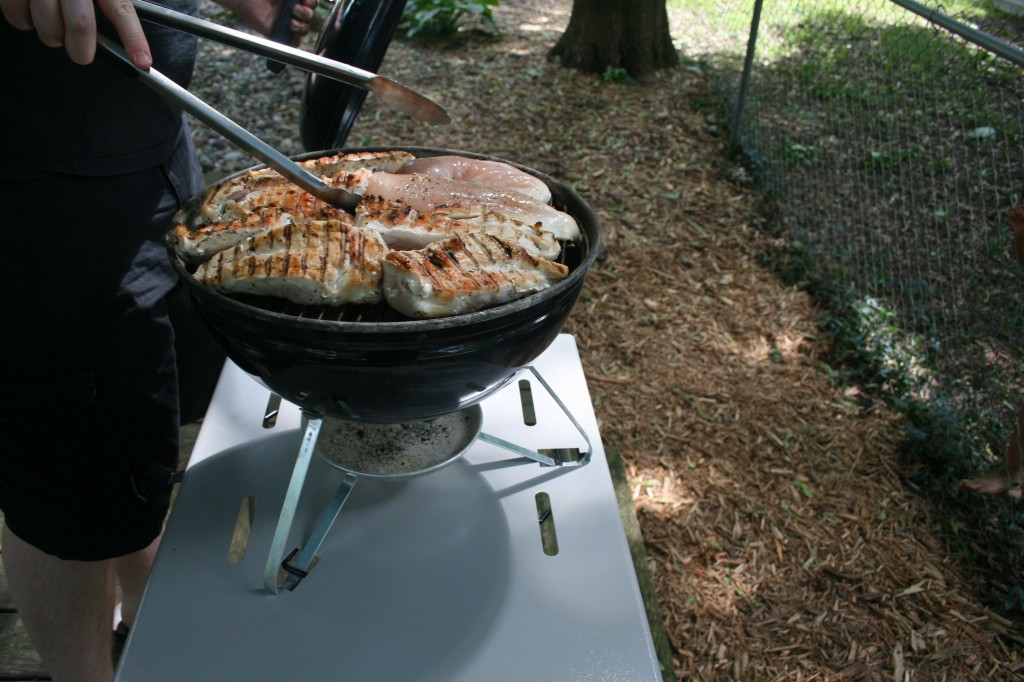 Put your lid back on and repeat the process of waiting six to eight minutes and your chicken should be finished. Chicken should reach an internal temperature of 165 degrees. Make sure to take your chicken off the grill and put it on to a clean plate to avoid cross contamination. 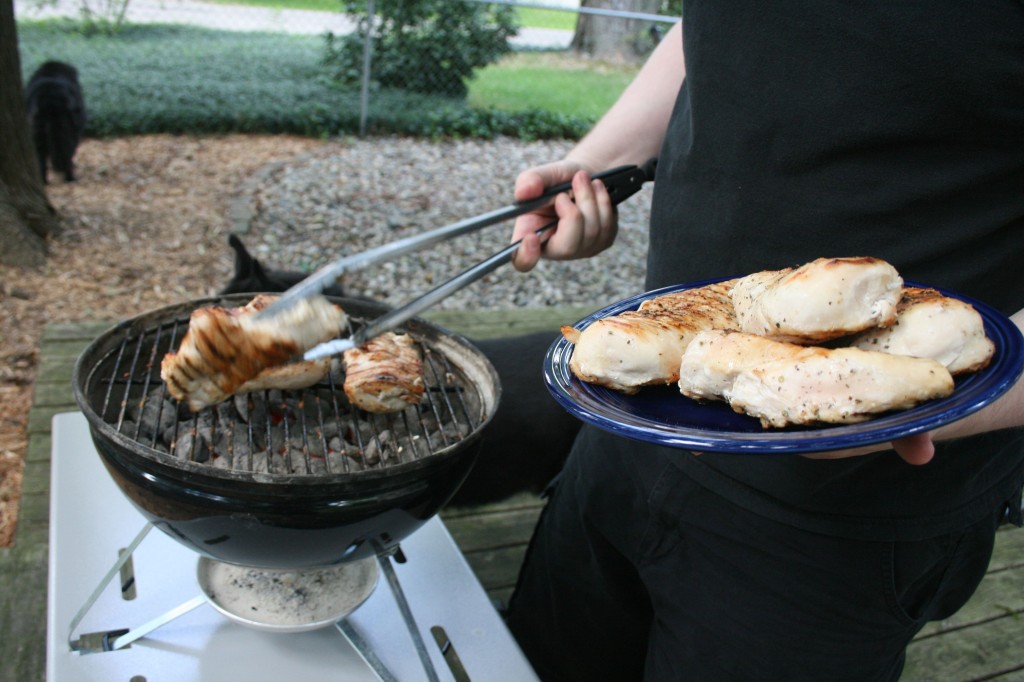 After the chicken is inside bring the clean tomatoes out and place them on the grill. 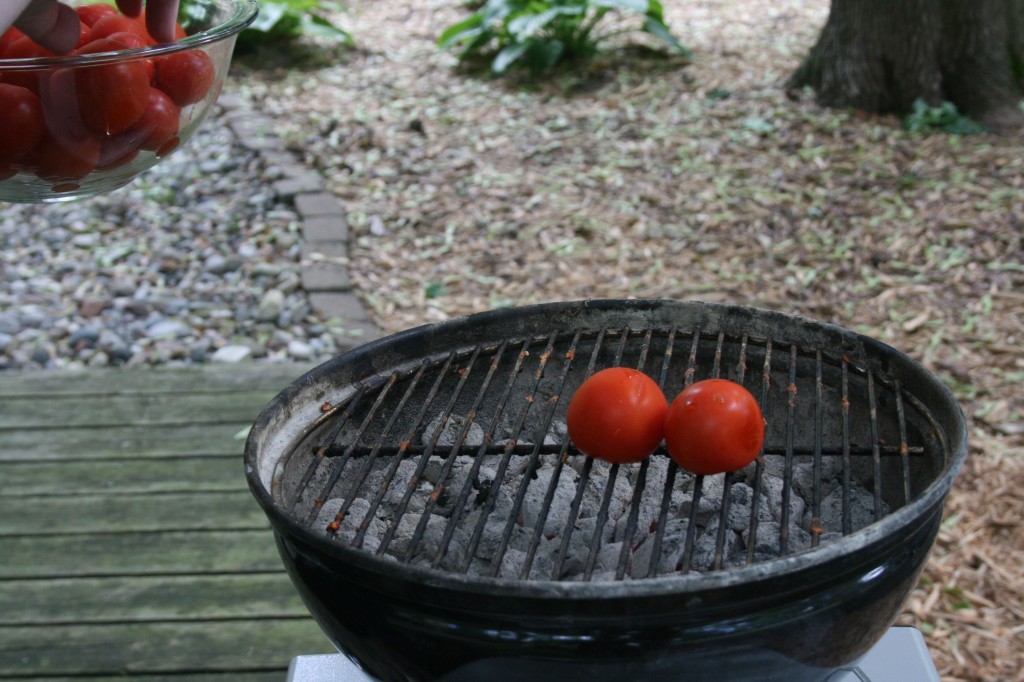 Just Put The Tomatoes On.

No, really pile the tomatoes on the grill. 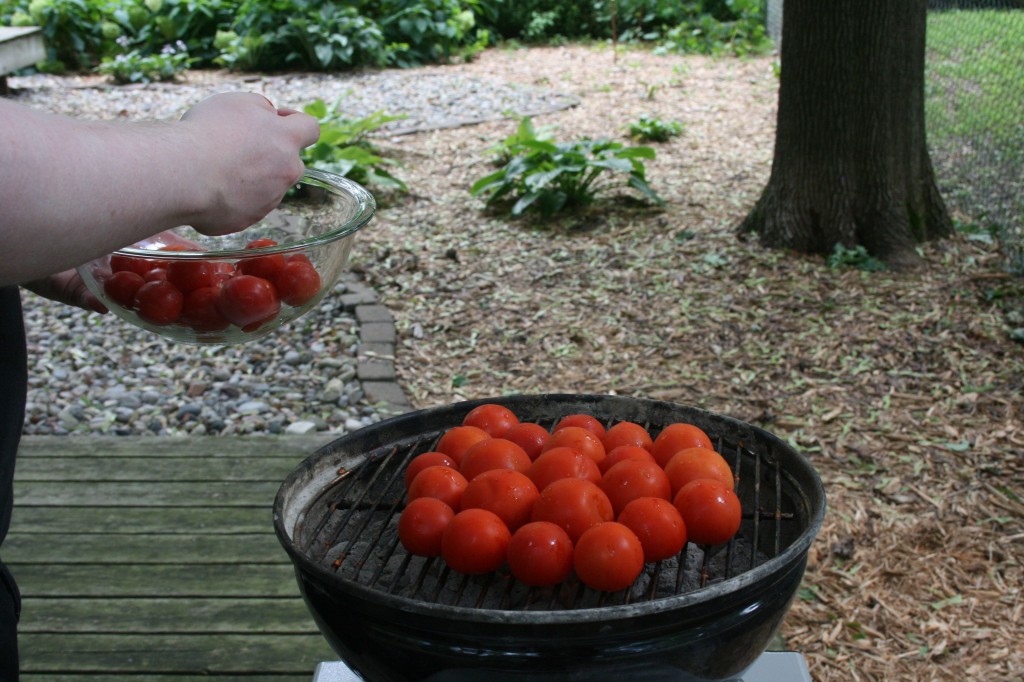 We Eat A Lot Of Tomatoes. 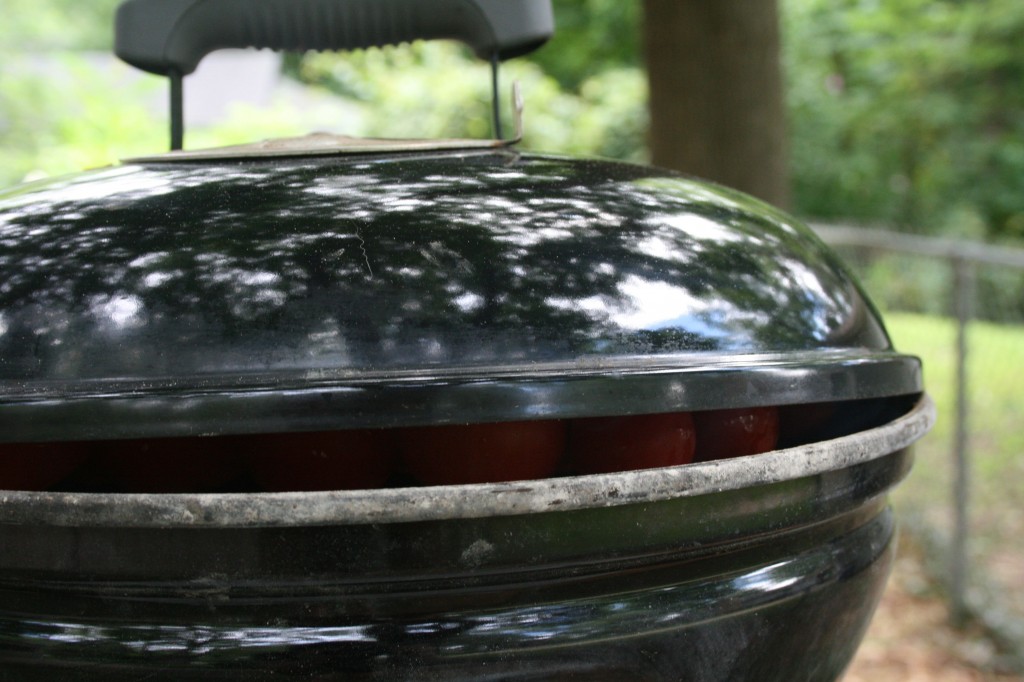 After the four minutes take out your trusty tongs and flip the tomatoes over. 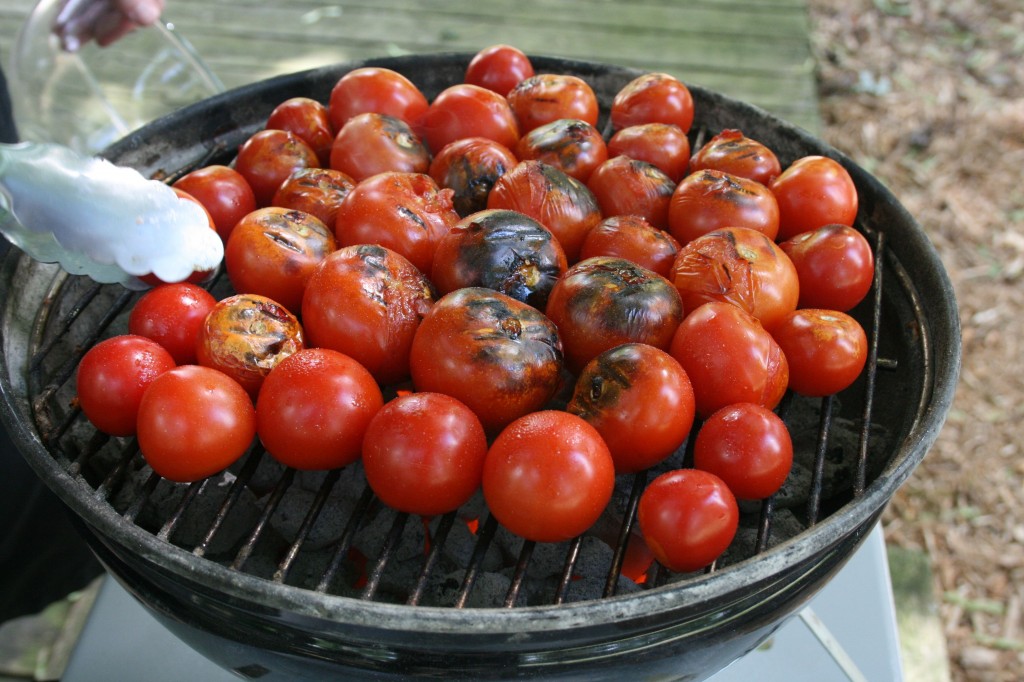 Not to sound like a broken record, but put the lid back on, set your timer for four minutes and amuse yourself. 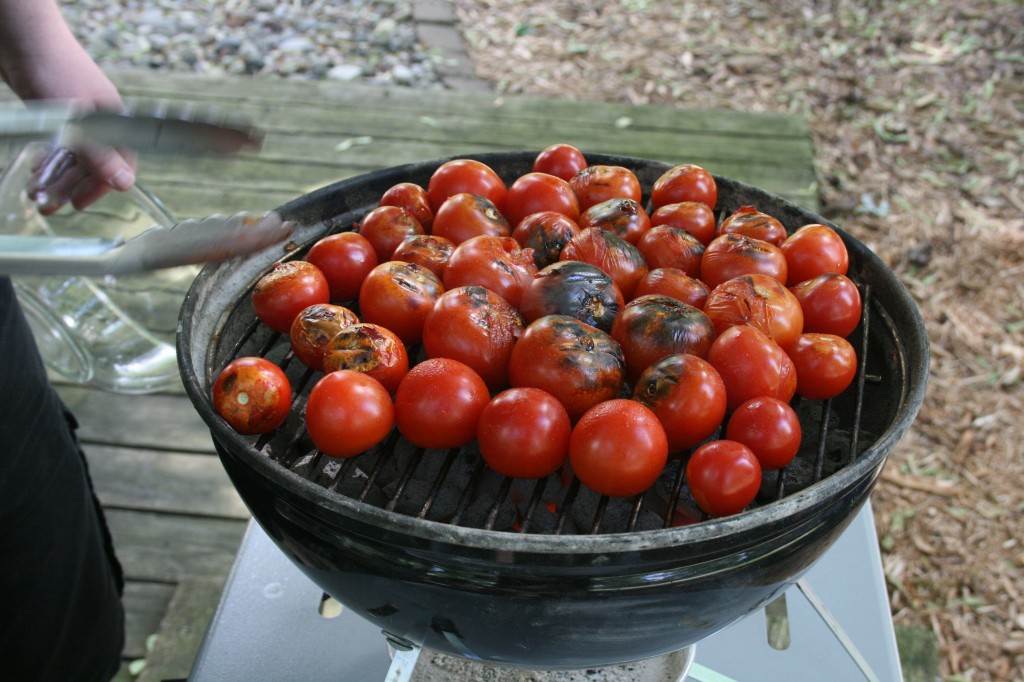 Take the finished tomatoes off the grill with your tongs and put them directly into a glass bowl. The finished tomatoes will have a nice char, will be soft and will peel easily. They taste amazing. We store them in a glass pyrex bowl for up to a week in the refrigerator.

Let the grill cool down while you’re eating your meal, about 30 to 60 minutes, and then clean the grate with a wire brush. Save the charcoal for the next time you grill. Pat yourself on the back for a job well done.