Home
>
Directions
>
Pizza On The Grill
Tweet Pin It

Eating FODMAP free is not always easy, but somehow we manage to figure it out. We have been FODMAP free or FODMAP friendly for about eight months now and there have been days when I have wanted to sit down and tuck into a bowl of pasta with tomatoes laced with garlic and bread dripping with real butter, but instead I stuck with rice noodles and tomatoes with Udi’s bread. I miss garlic.

A couple weeks ago we went to my parents’ house to have grilled pizza and Team VP had to make a crust that was both grill proof and FODMAP free. Here is what happened: 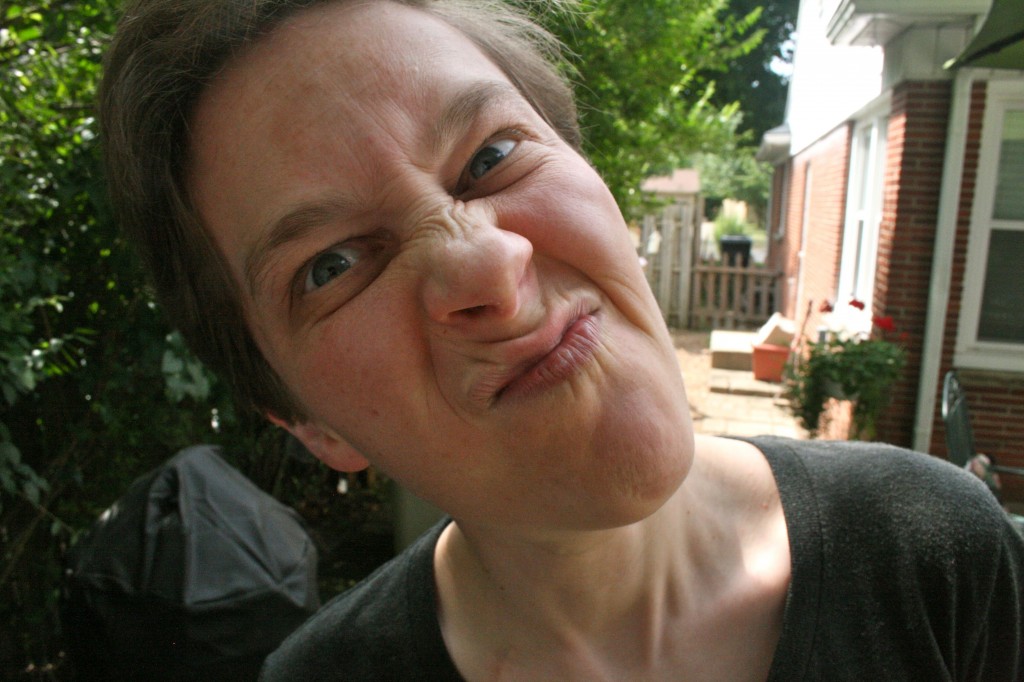 Sorry, nope, that is me, goofing around with Mr. MVP. Actually what happened is this: 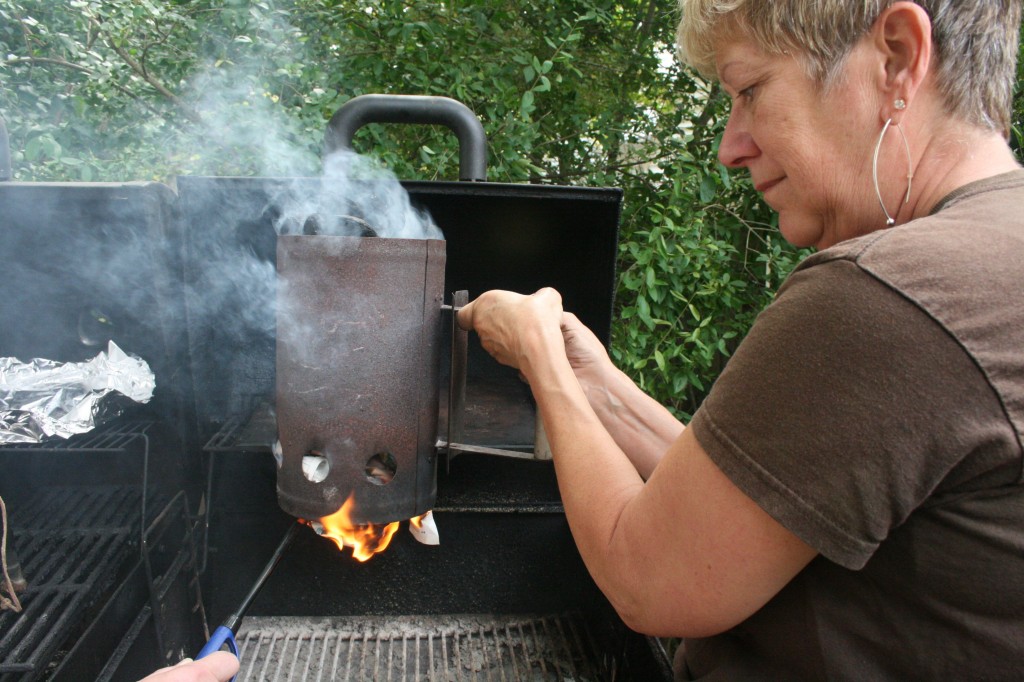 This is my Mom holding a chimney starter, which she swears by. You shove newspaper in one end and charcoal in the other and then you have your Dad light the newspaper and – boom – hot coals. This process takes the place of lighter fluid and my Mom likes it a lot better. It produced a lot of smoke which made me cough, but I will say, it did not smell. My Mom has perfect chimney starter form. 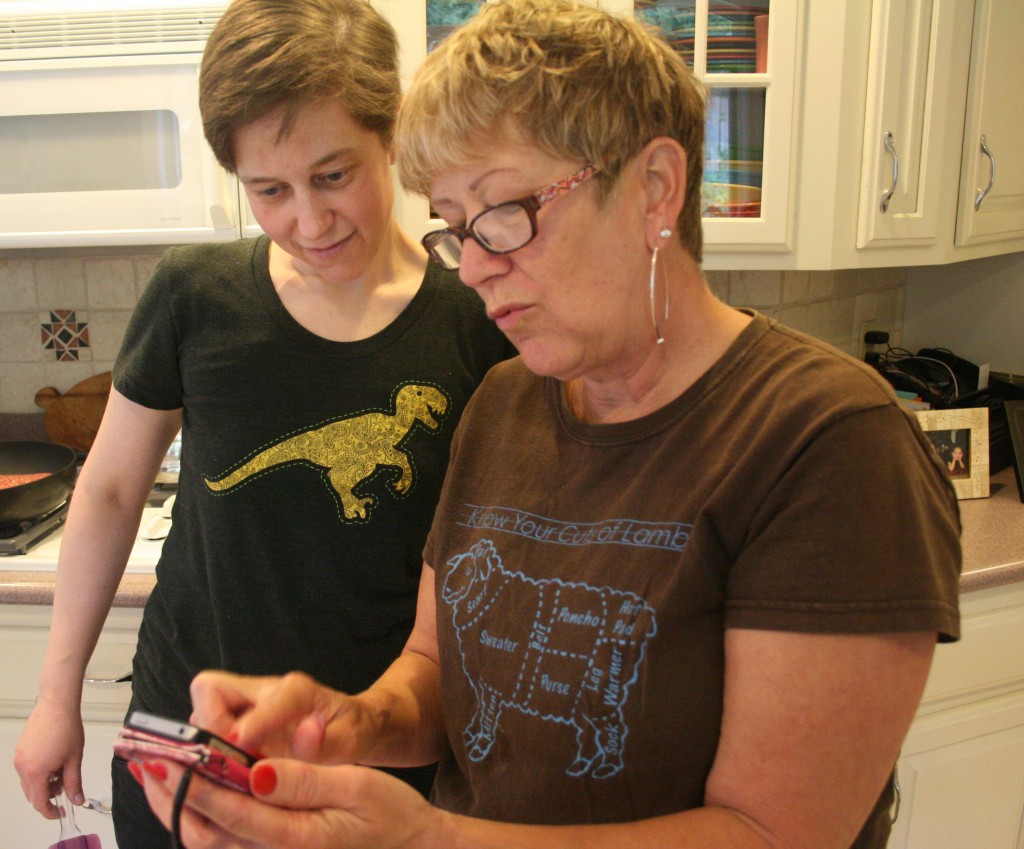 After the grill was started we took a moment to gossip. Then it was time to get to work. As a FODMAPer I always use King Arthur Flour Gluten Free because it’s reliable. It doesn’t give Mr. MVP any problems and it tastes good. We decided to try their pizza crust. 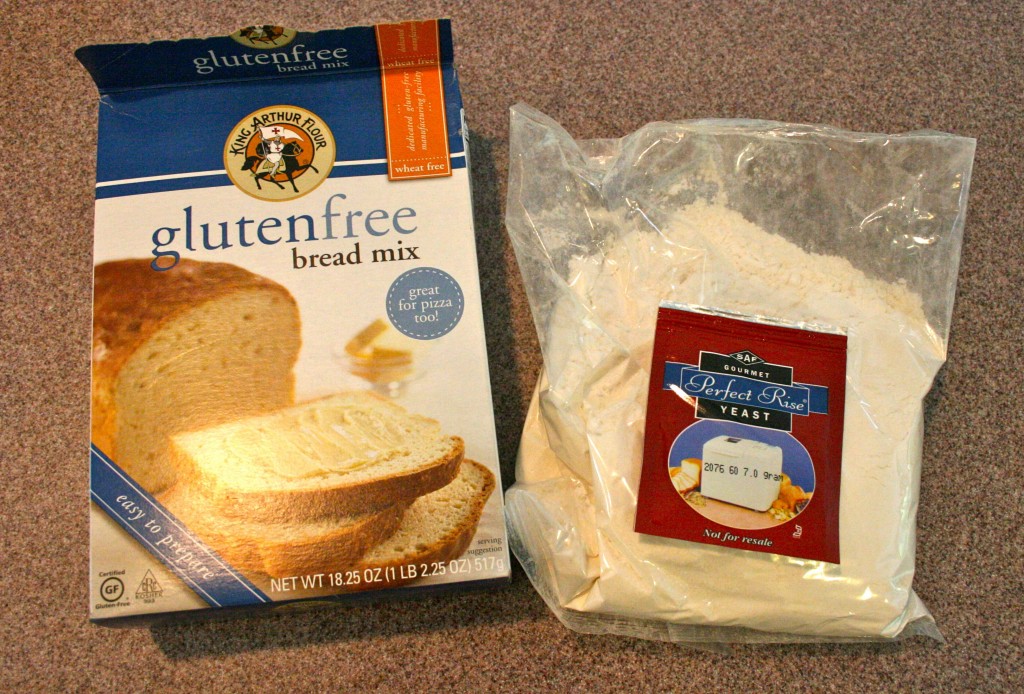 The directions say 3 large eggs, 1 and 1/4 cups warm water and 4 tablespoons olive oil. Pretty simple. I assembled my ingredients and went to work. 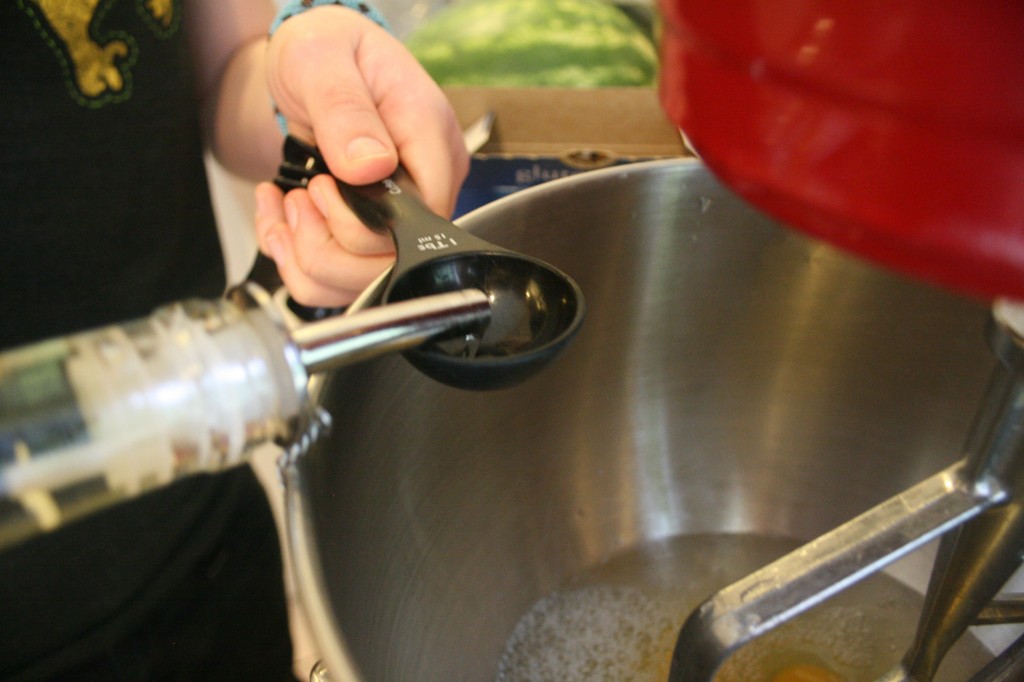 The directions say combine the water, oil and eggs. Everybody in! 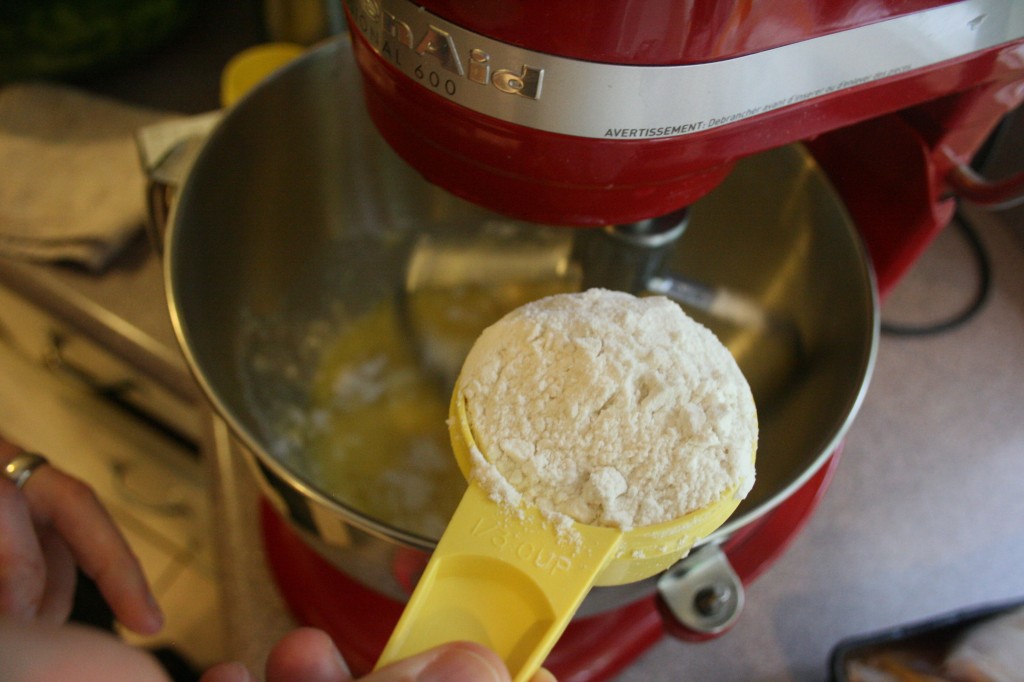 I added one cup of the mix and then turned the Kitchen Aid up for 30 seconds. Then I added the yeast like so: 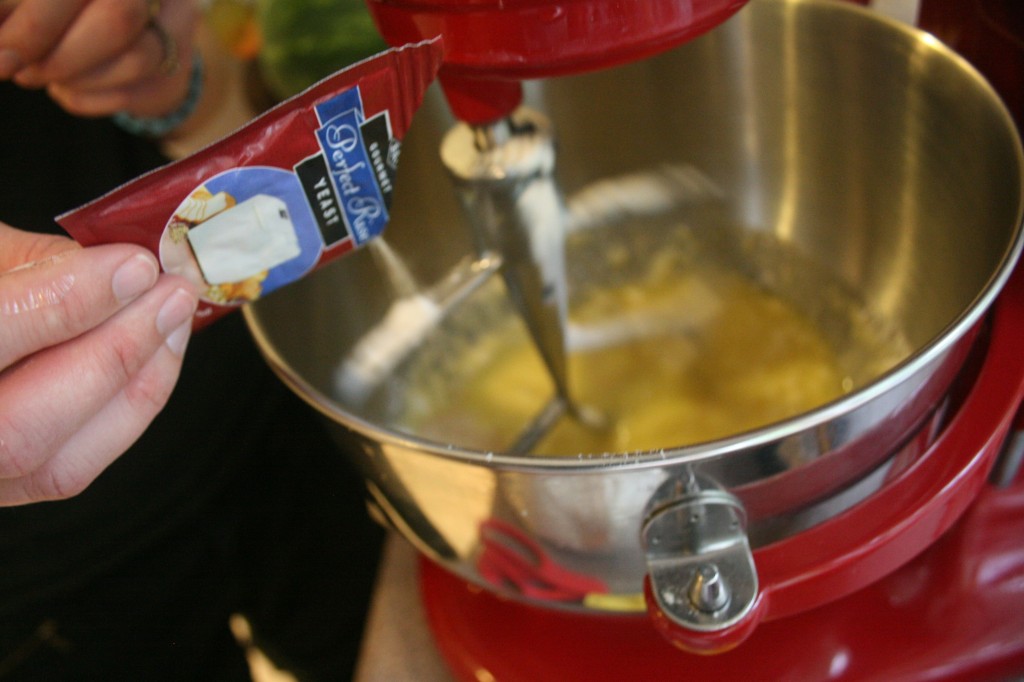 Next I continued to add the mix one cup at a time while continuing to mix after each addition. I was guessing on the cup part, but I was counting to 30. 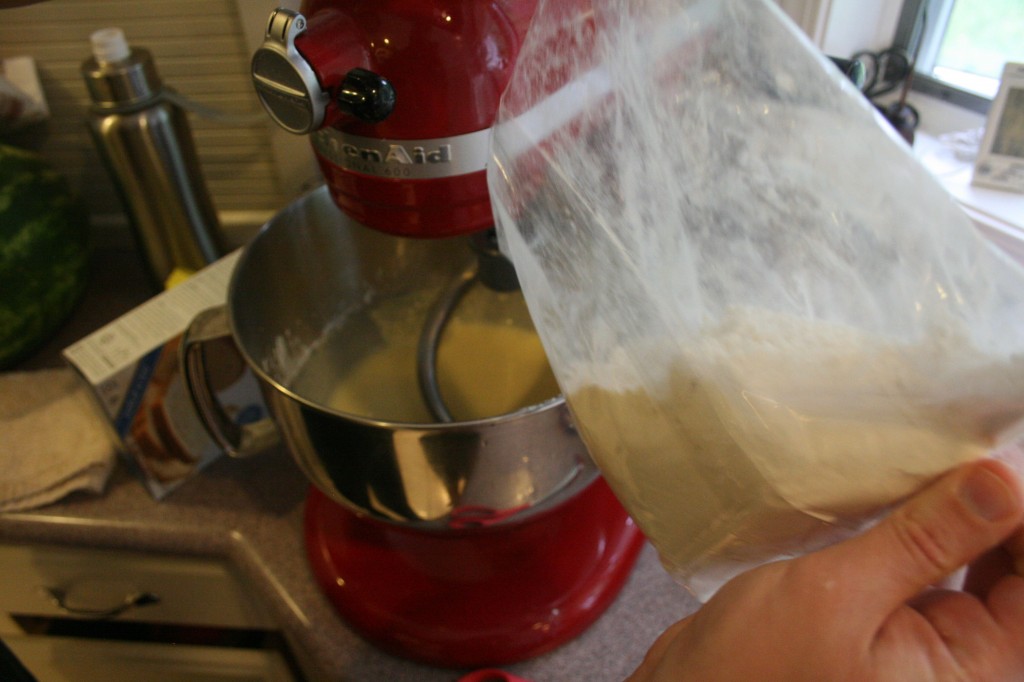 After everything was added I turned the Kitchen Aid up and beat everything together for an additional two minutes. When my timer sounded I scraped down the sides of the bowl and was extremely worried because my crust looked nothing like crust. It was very loose. I covered it with a towel and said a prayer to the bread gods and set my timer for thirty minutes. Then I went to see what my Mom was doing.

My Mom was prepping ingredients. Here is what we like on our pizza: 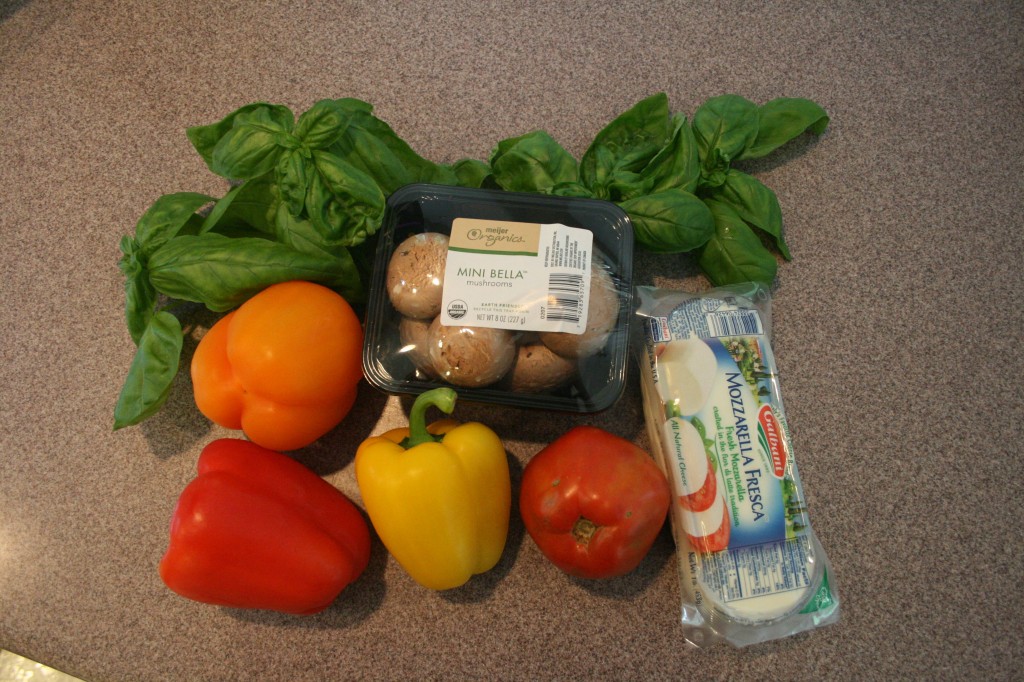 The green leaves are basil, which my parents’ grow in their backyard, then we have red, yellow and orange peppers, mini bella mushrooms, tomato and mozzarella cheese. We also like ground beef. It’s FODMAP free when it’s organic, grass fed beef. My Mom is going to show you how to prepare the toppings starting with the mozzarella. 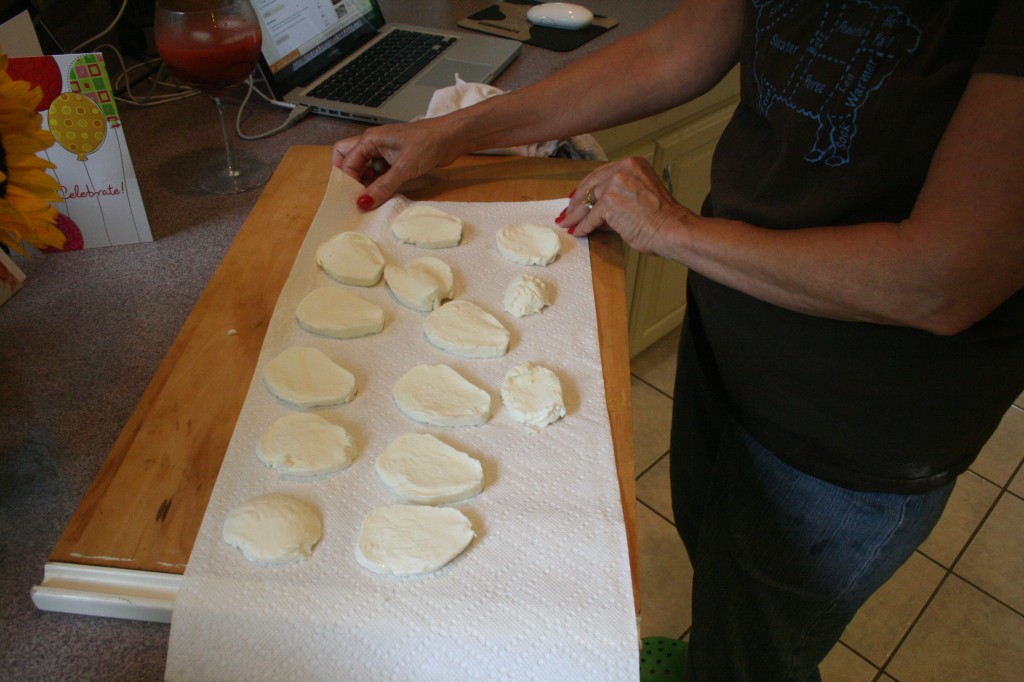 The cheese has a high water content, so my Mom put the slices of cheese between two paper towel and then presses down. 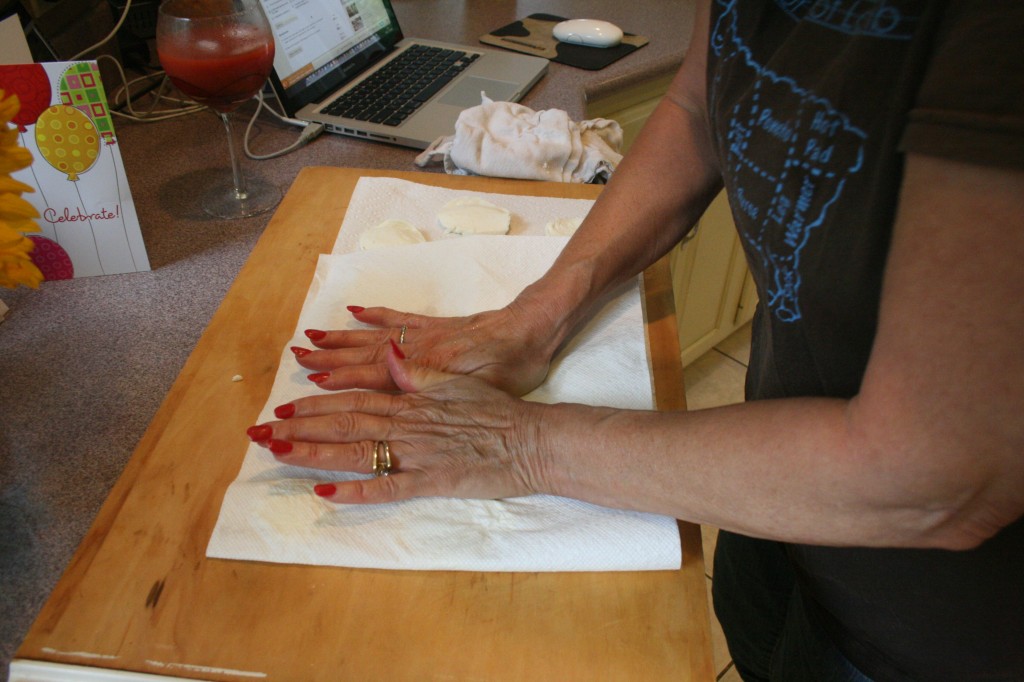 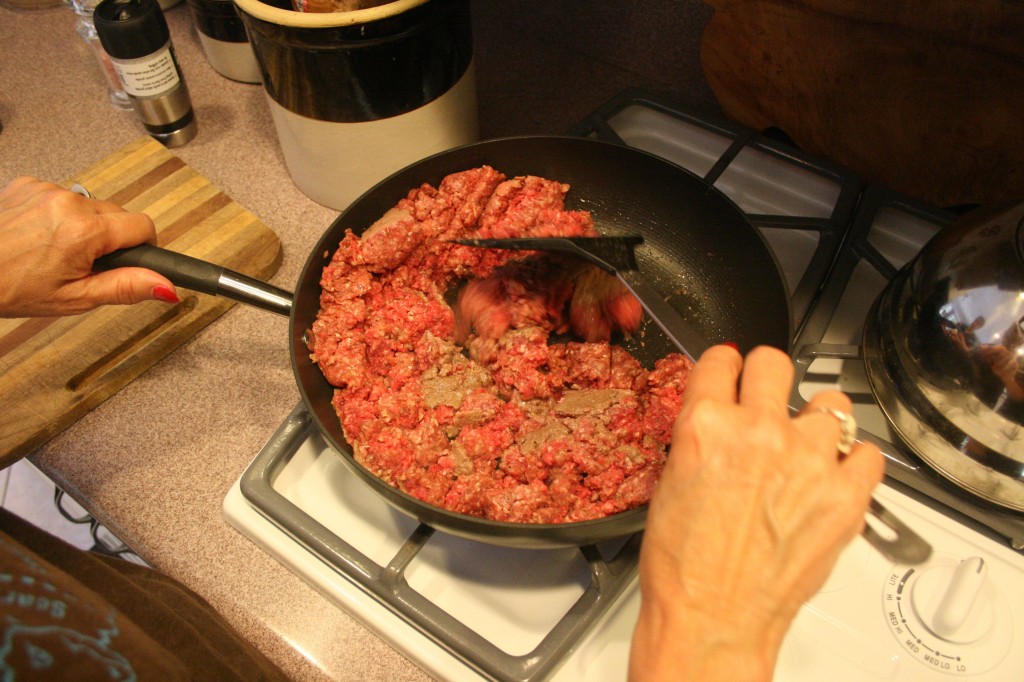 Here is the ground beef being browned. There is really no science to this. Just put the ground beef in the pan and keep moving it around until it’s brown. Once it’s cooked drain it and put it aside until it’s ready to be used as a topping. 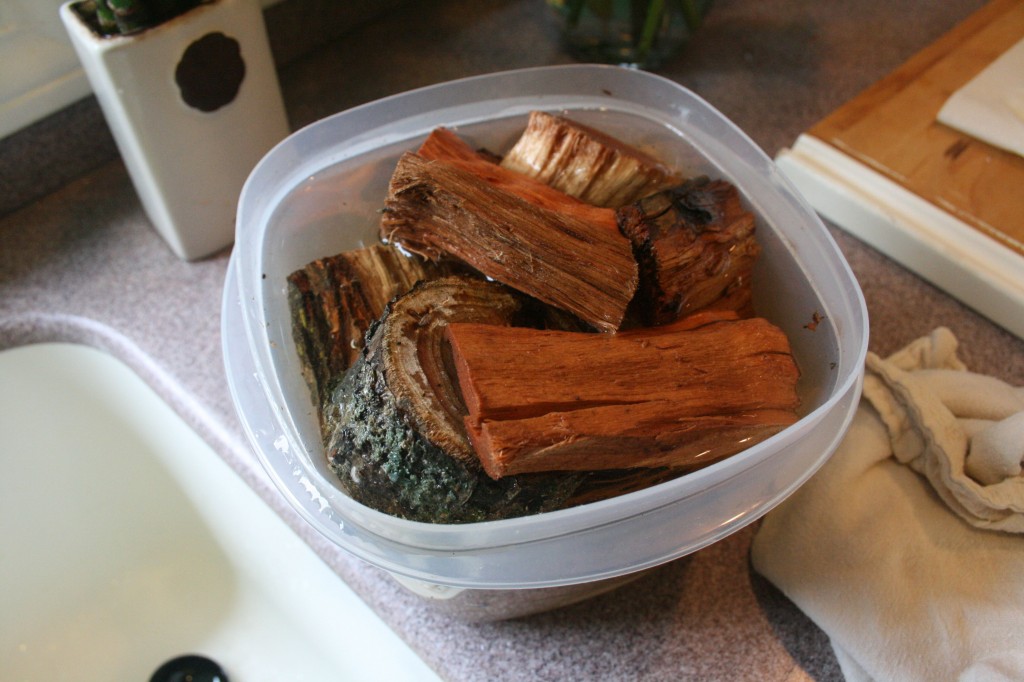 Here are the wood chips that are soaking and getting ready for the grill. My Dad’s grill has a smoker attached to it and these wood chips give our pizza all their flavor. Back to my Mom. 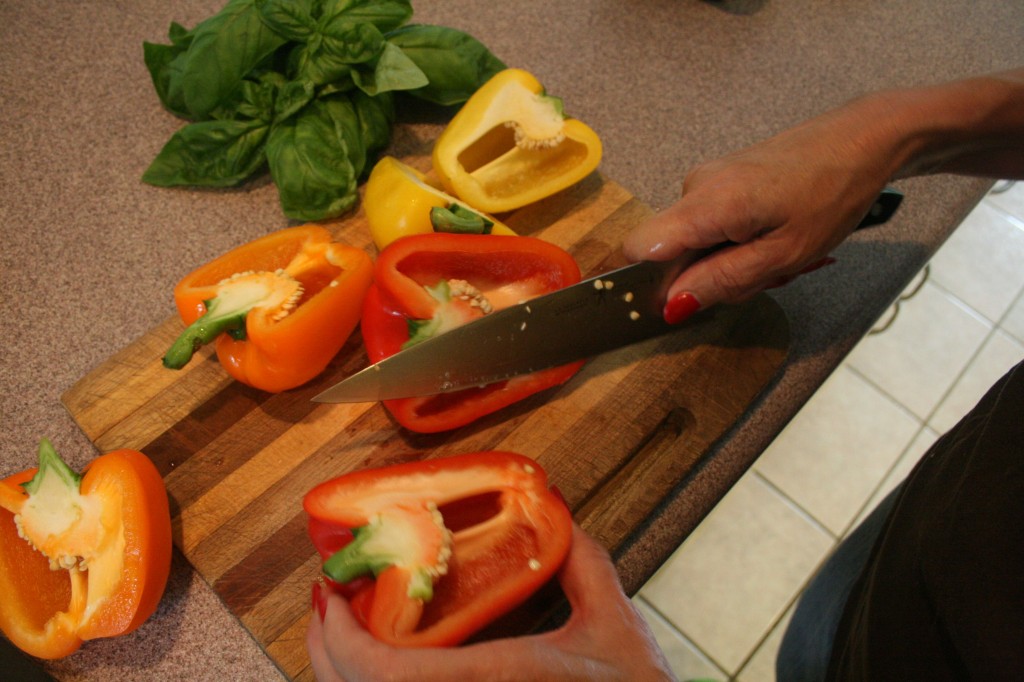 Peppers can be cut many ways as long as the insides are taken out. We cut our peppers in long thin strips. Some people like their peppers in circles. It’s all preference. On to the mushrooms. 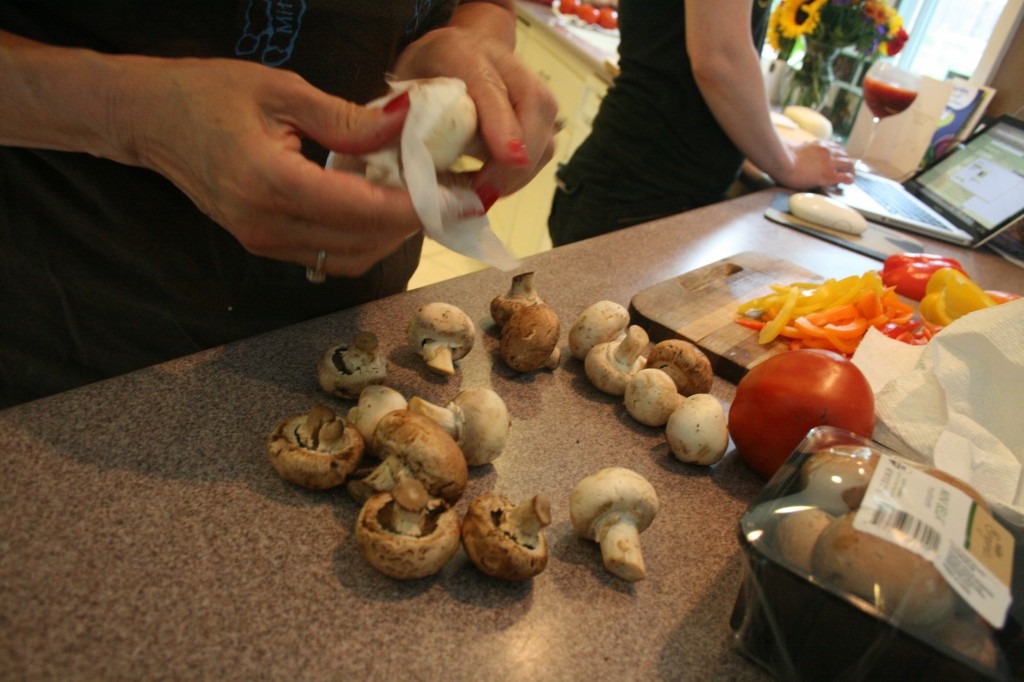 First my Mom cleans the mushrooms while apparently I play on the Internet. Man am I a slacker. To clean mushrooms simply wipe them off with a damp paper towel or use a vegetable brush. Please don’t submerge mushrooms underwater because they are like sponges and you will be left with a mess. Then it’s on to chopping: 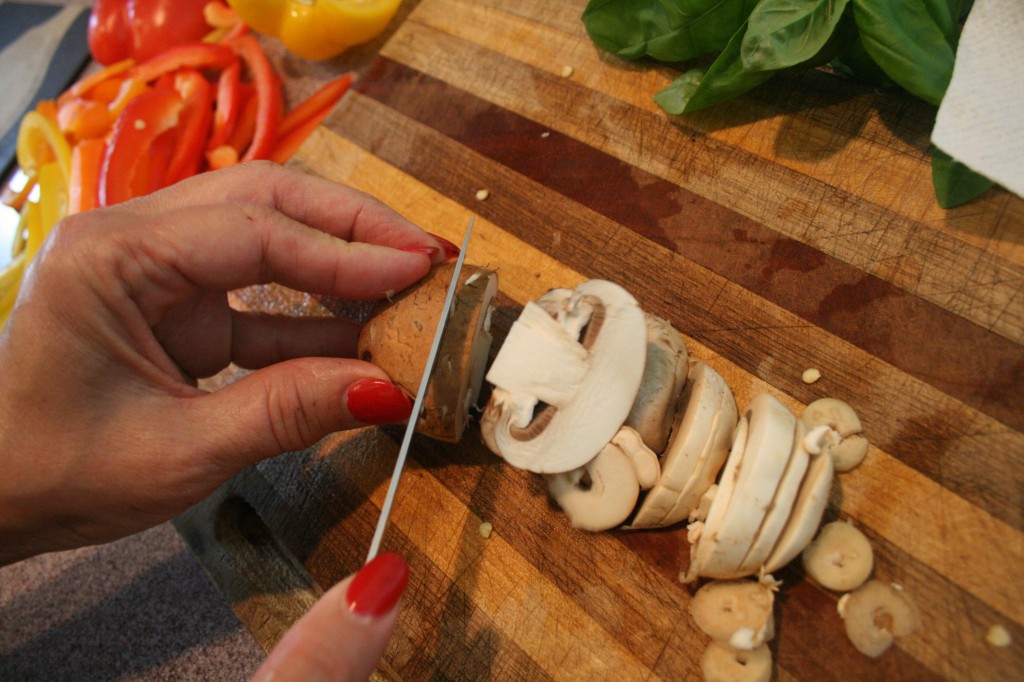 You can cut your mushrooms any way you’d like. We wanted slices. Look at my Mom’s pretty red fingernails – fancy! 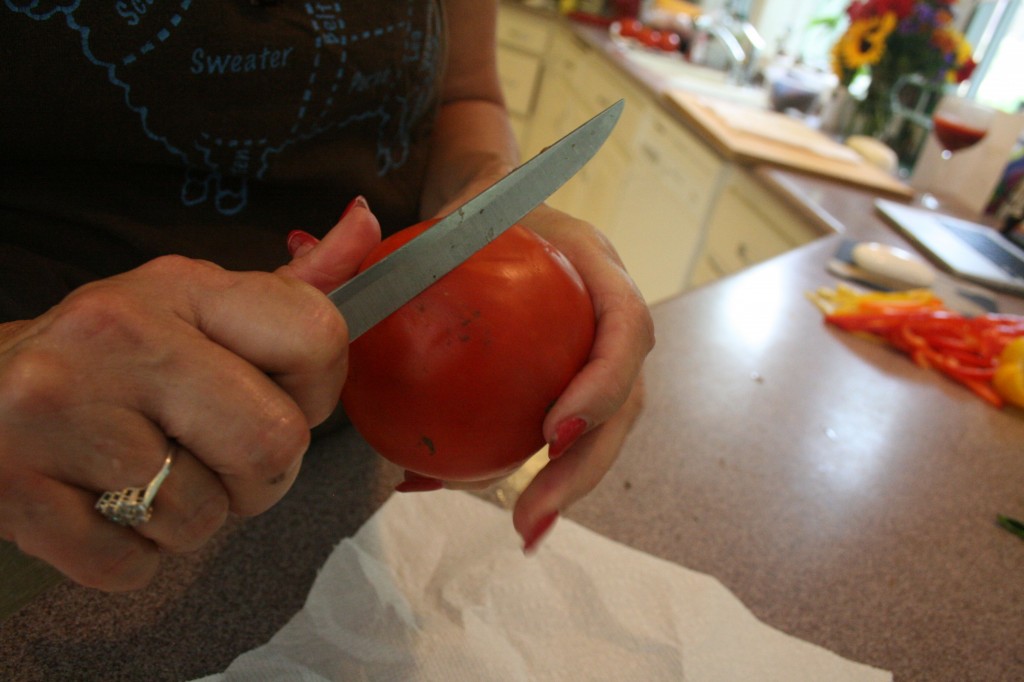 Last, but not least in the prep process is the tomato. We peel our tomatoes because we don’t like the skin. To make it easier simply run a really sharp knife over the outside of the tomato to loosen the skin and then use the knife to peel the tomato. Then cut the tomato in slices. Finally prep is done. Seriously, what in the world was I doing? 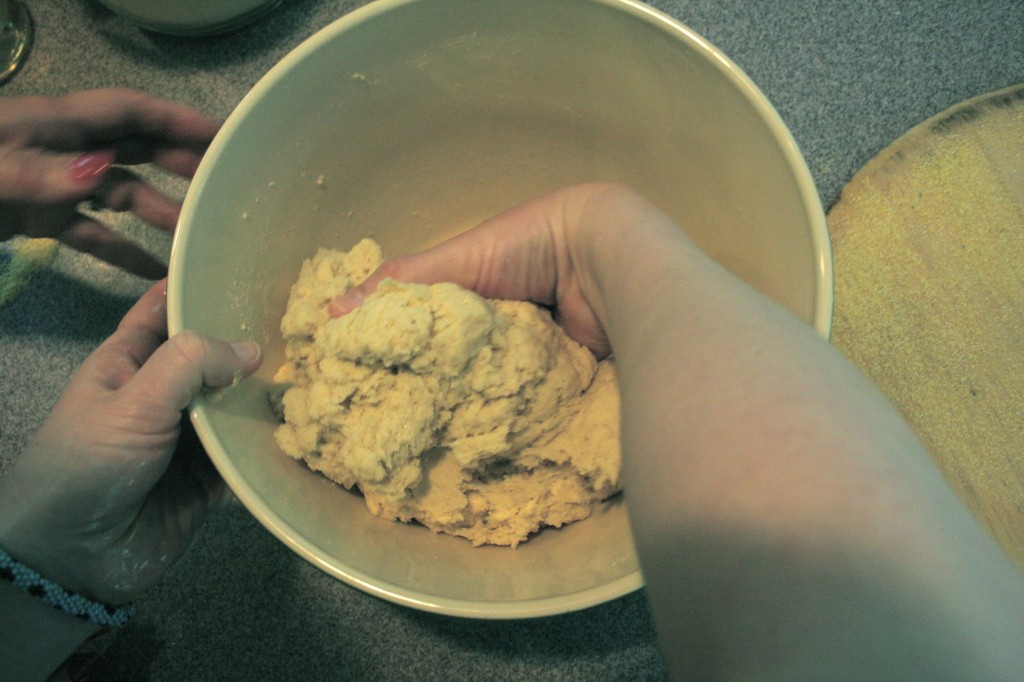 The timer rang and the dough is ready, which means my Dad is there with the pizza crust paddle and I’m not ready. My Mom’s hand on the back of the bowl is there is hurry me up. 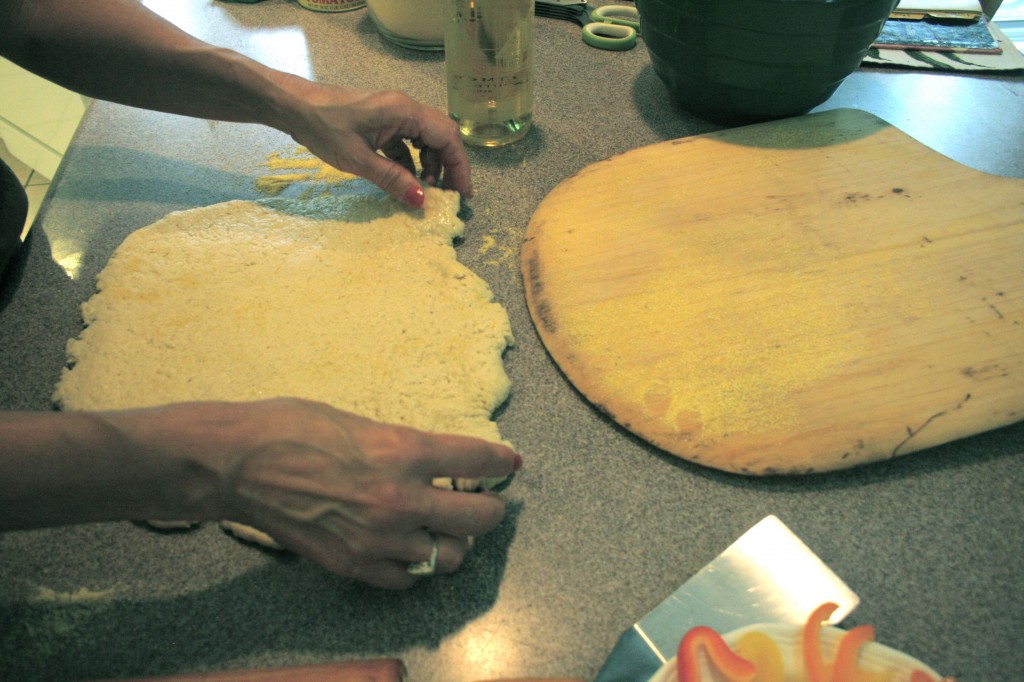 Really just take your dough and squish it into a pizza like shape. We used cornmeal on the pizza paddle to make it not stick and olive oil for our hands. Remember this goes on the grill, so the crust has to be not too thick, but not too thin. 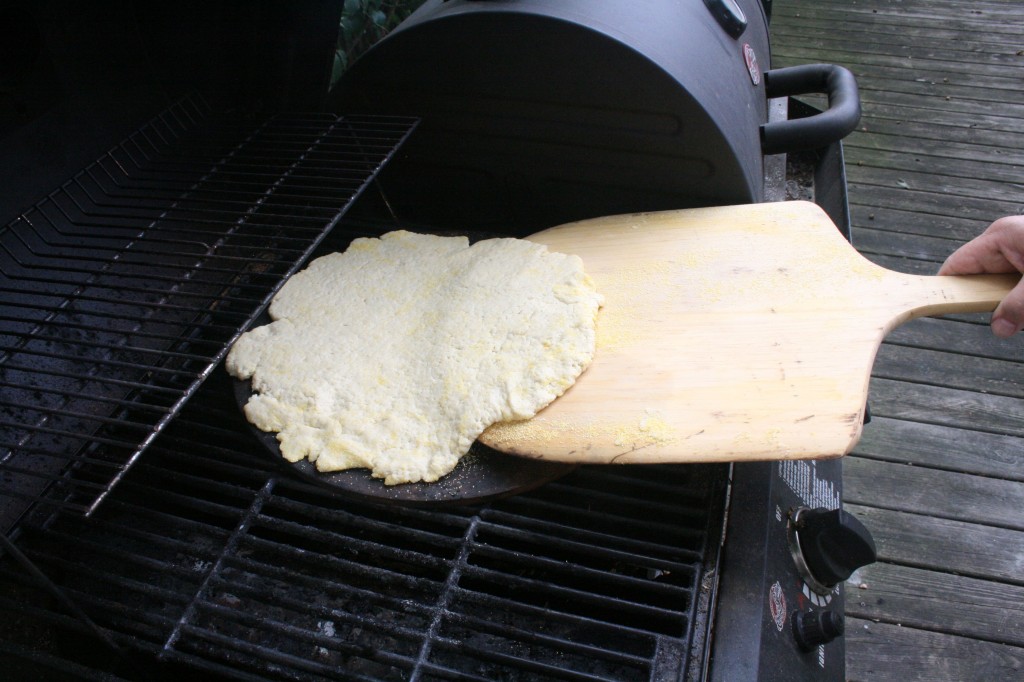 The crust then goes on a pizza stone on the grill to cook for the first phase. 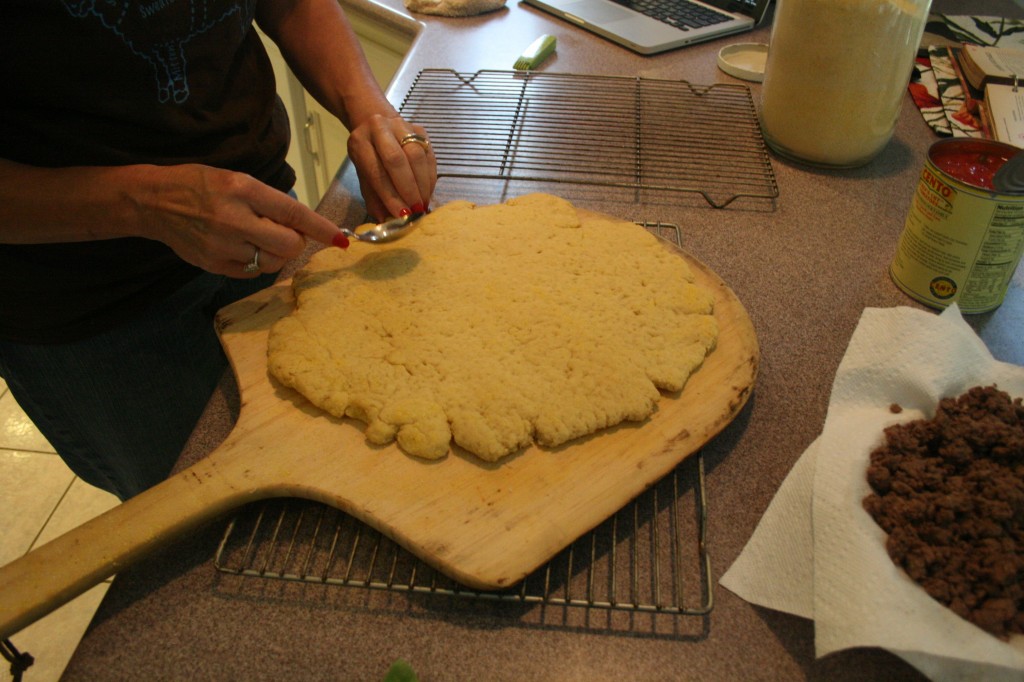 When the pizza comes in from the grill after cooking it’s ready for toppings. You will notice that there are tomatoes in a can on the counter. Those are awesome tomatoes that I think are Italian. The ingredients are: tomatoes. They taste so good. We use them as a sauce on pizza since most sauces have preservatives, garlic and onions in them. Now, watch the magic with sauce first: 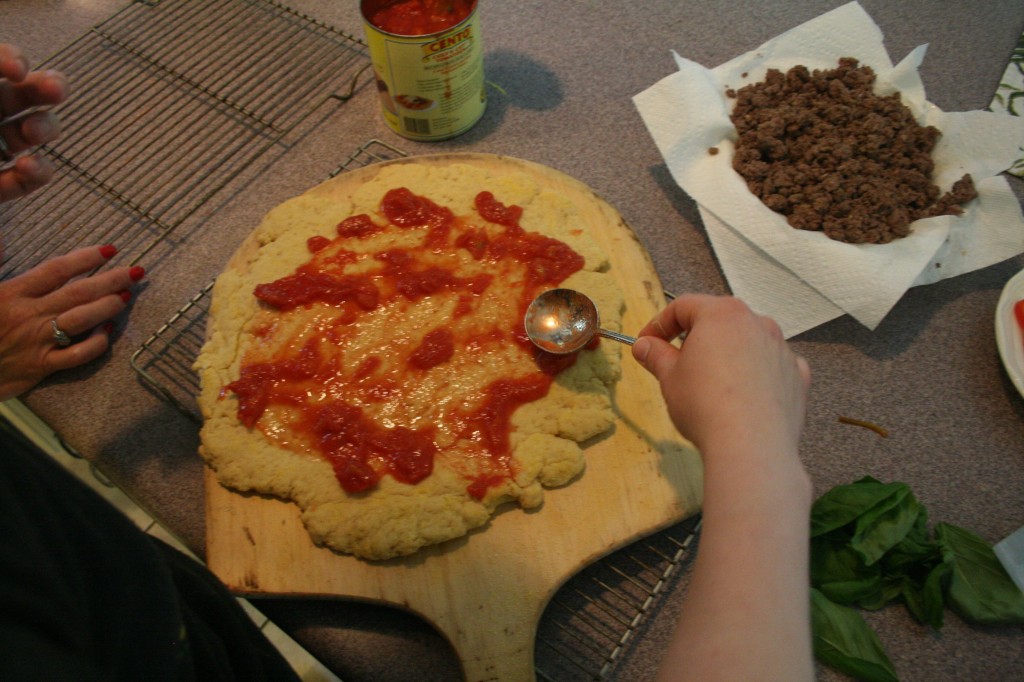 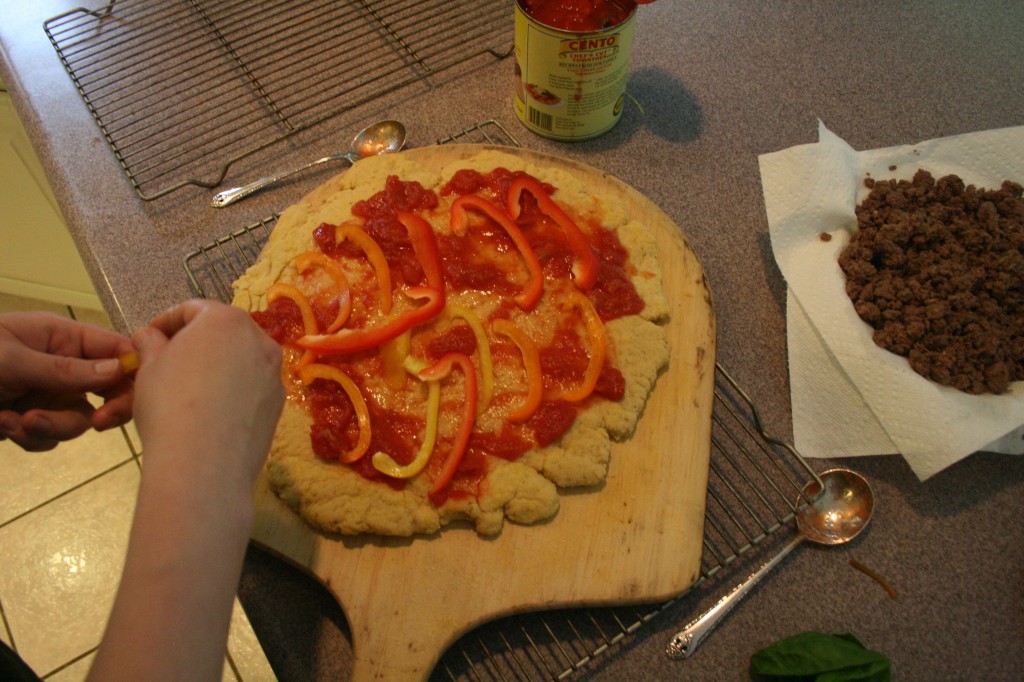 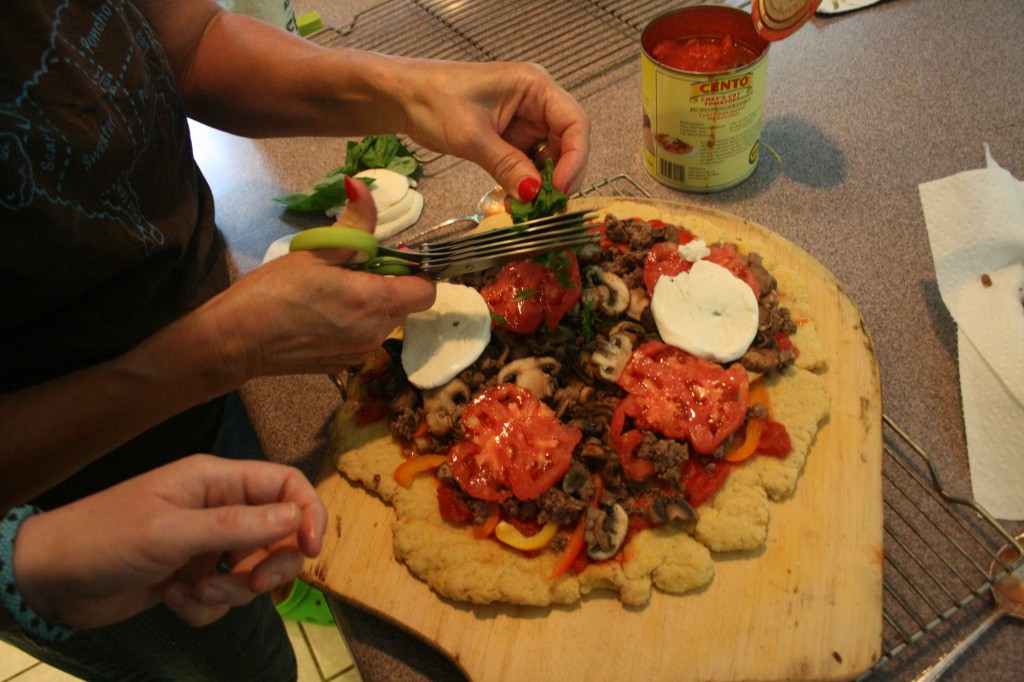 After everything is on, your Dad shows up again with the grill paddle and the pizza disappears. 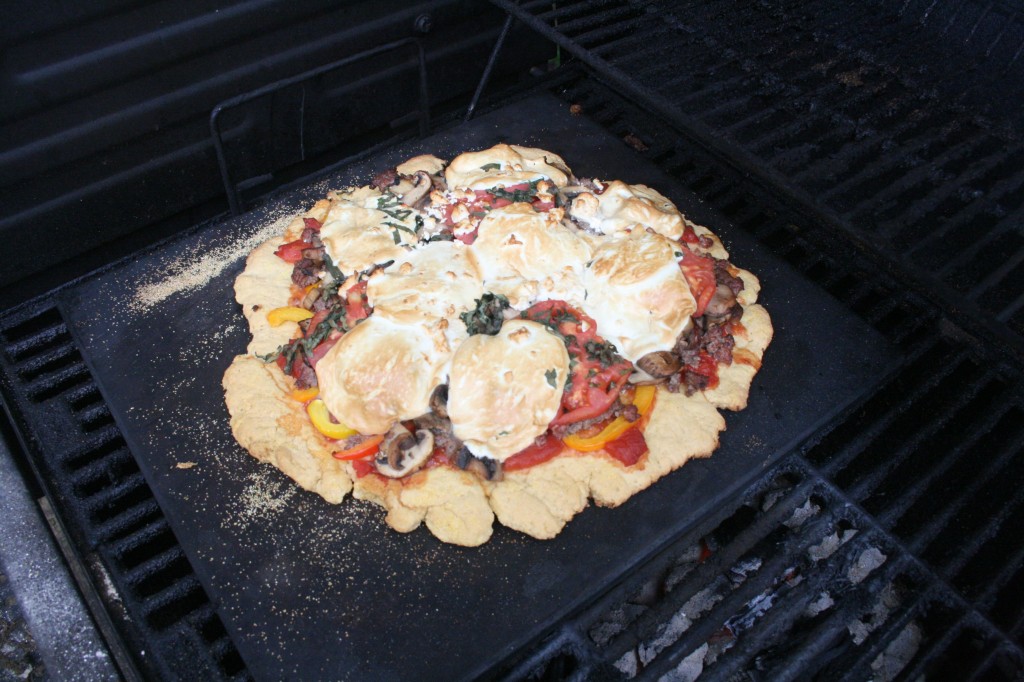 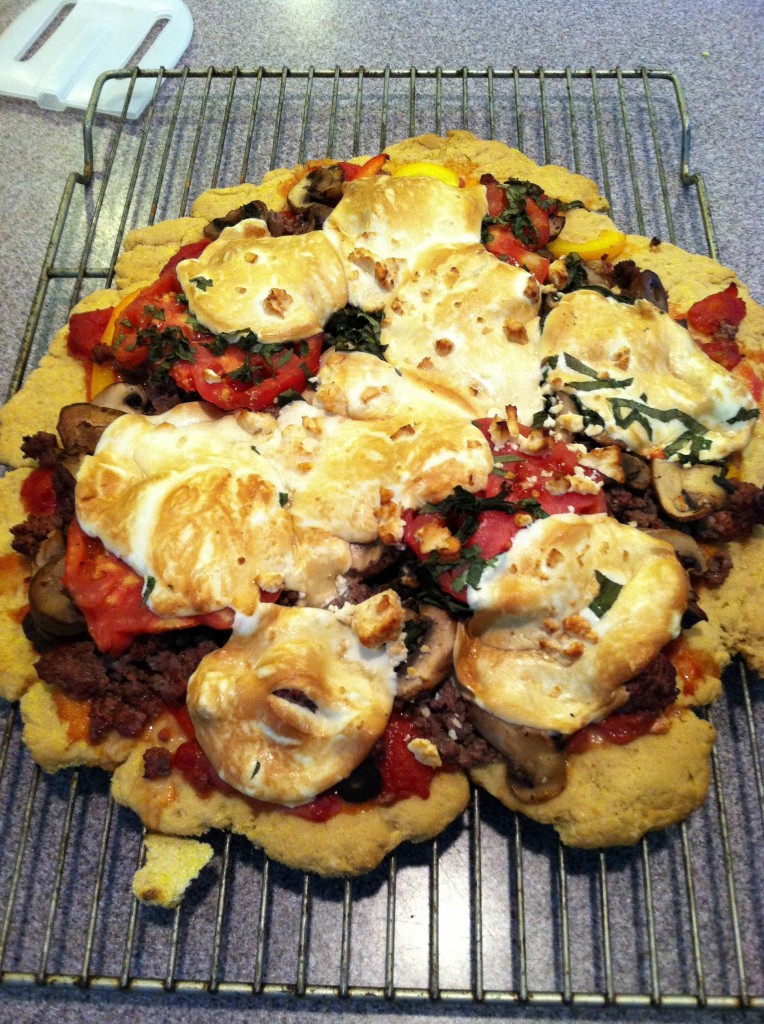 We decided this crust was good, especially for gluten free. It was not grainy and did not have an aftertaste. One downside, it had absolutely no flavor. This crust was more of a vessel for the toppings. Mr. MVP ate four pieces of pizza, so I know the crust was decent. The leftovers lasted less than 24 hours so I really know King Arthur, Team VP, and Team B grilled successfully.