A few weeks ago Team VP ventured out into the world and ended up at Gull Meadow Farms because I had the bright idea that it would be interesting to go pick out pumpkins on the dreariest day in October. Approximately 35,000 other residents of Kalamazoo and their offspring had the same fantastic idea that I did. 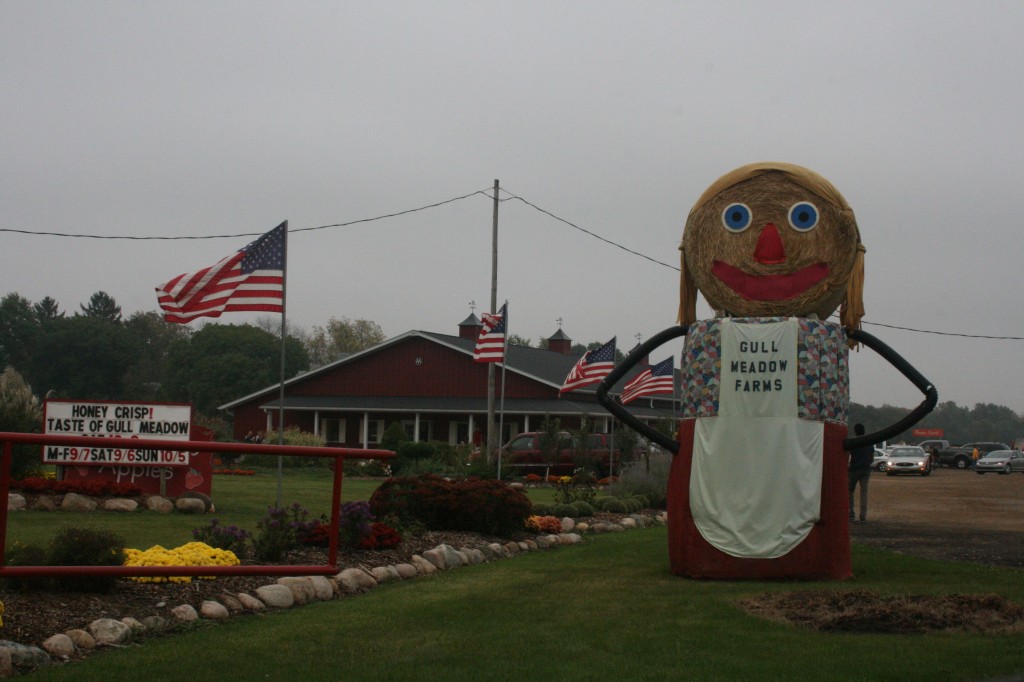 It was super cloudy.

Even though half of Kalamazoo was there I really wanted to walk through the corn maze because not only did it sound like an adventure, but it involved a wagon ride. I’ve never been on a wagon ride. I was dressed appropriately for a little rain, but about fifteen minutes after we arrived it started thundering and lightening. Mr. MVP decided I was not dressed appropriately for lightening strikes in the middle of a corn field, so we looked through the barn instead. 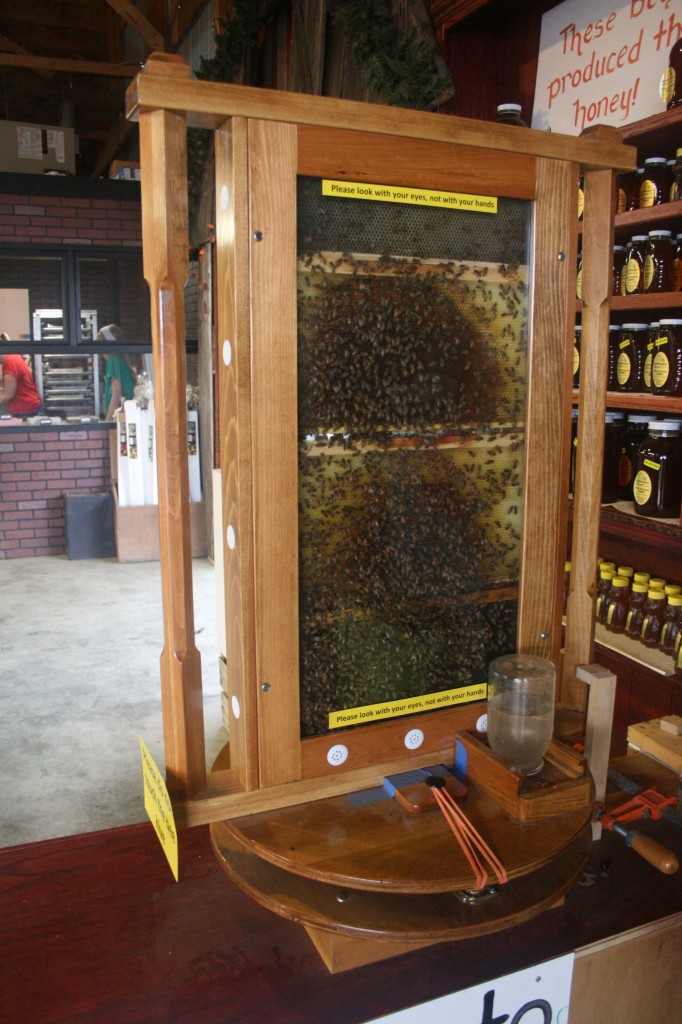 The barn was actually fairly fascinating. Most of the families were outdoors in the rain, which still makes me question the amount of responsibility the parents were demonstrating, but it gave Team VP a moderately calm space to explore. The hive above has a great sign that says, “please look with your eyes, not with your hands”, which I noticed just before I was going to touch the glass. Oops. 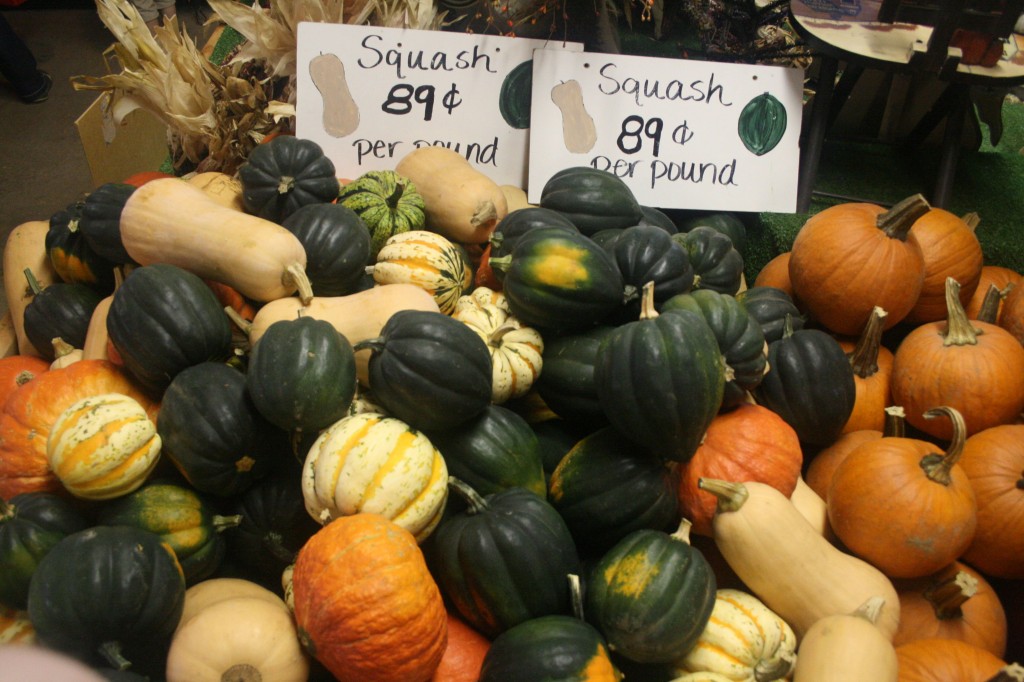 I’ve always wanted to take home a butternut squash and make delicious soup, but I’ve always been scared. I need to conquer that fear. 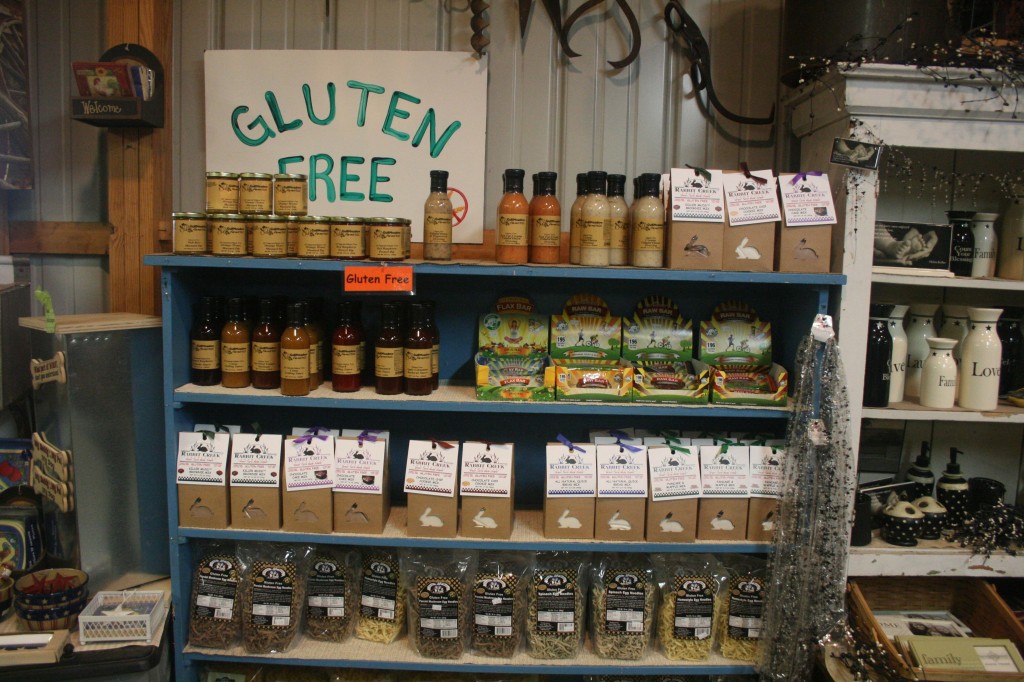 Tucked all the way in the back corner was this little gluten free section, which was indeed gluten free, but not certified gluten free. This means that if you are actually really allergic to gluten you will not be happy after eating these foods. I also noticed that most of these products are typical pre-packaged foods that are not conducive to a FODMAP diet. 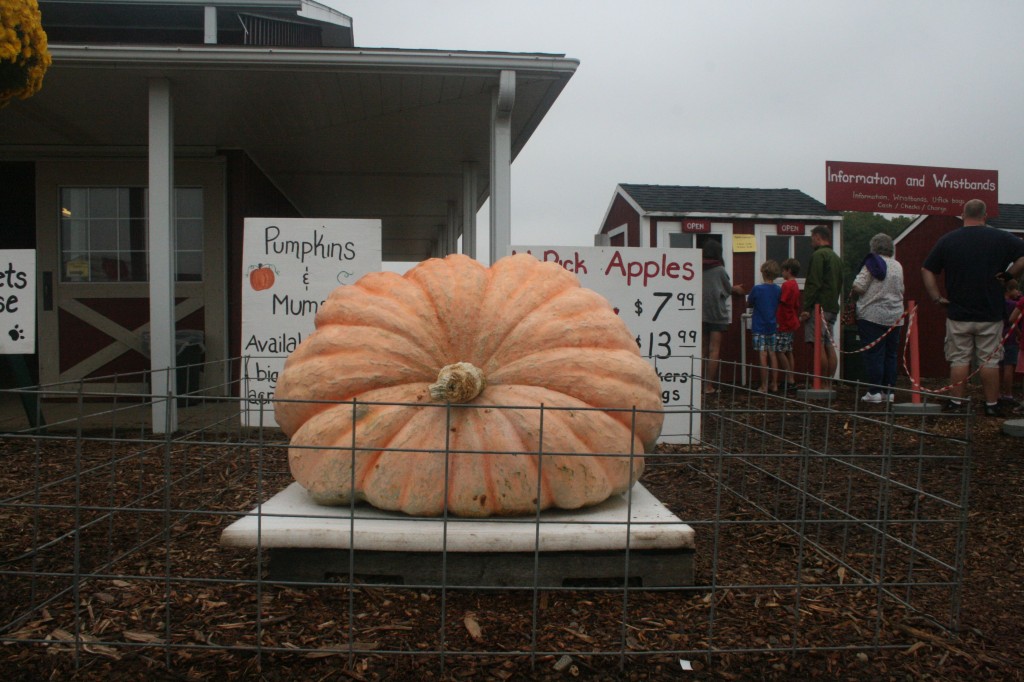 On our way out we ran into this behemoth. Mr. MVP declared that we should take it home. I suggested we keep moving to the more VP sized pumpkins. 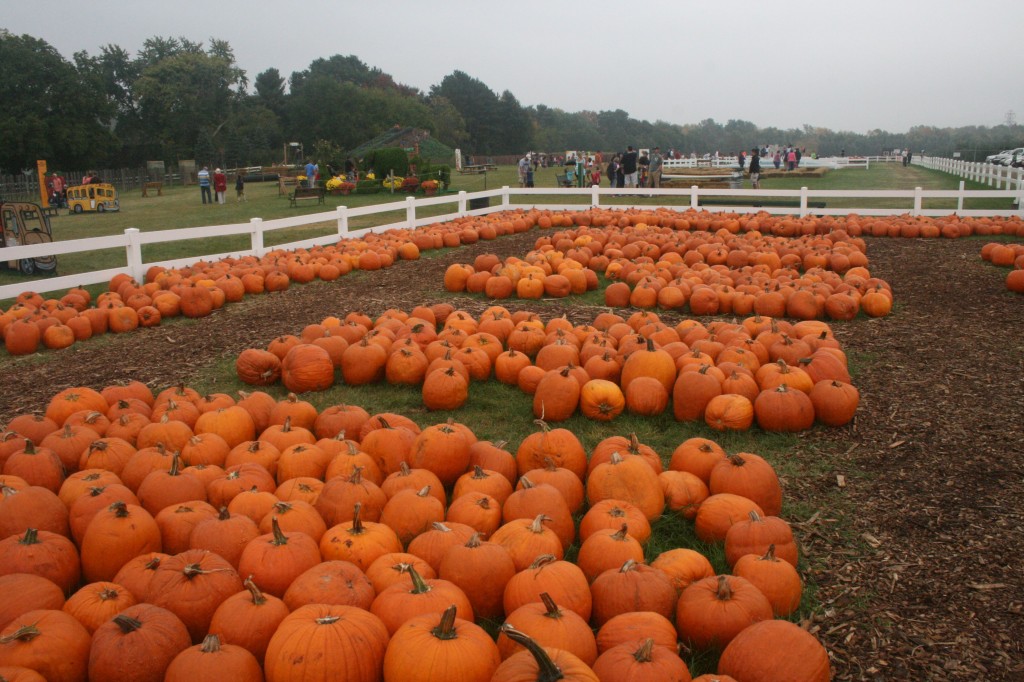 At Gull Meadow you are allowed to pick your pumpkins and then they charge you by weight. Mr. MVP wanted the largest pumpkin he could find. It was raining pretty nicely by that point, but we made the rounds with our wagon. This is what we came up with: 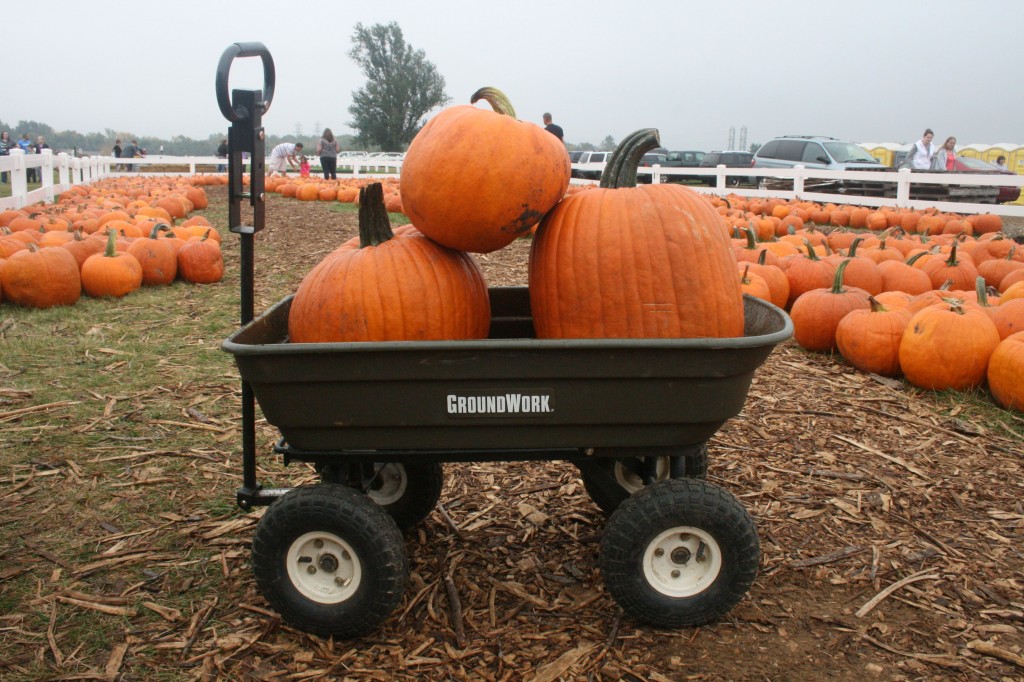 As we were leaving Gull Meadow the clouds rolled in and the rain picked up. There were so many people arriving and leaving at the same time there was a car accident in the middle of the parking lot. As we pulled by there was a huge wagon full of families being loaded out to the corn maze and I asked Mr. MVP what they do when it starts to downpour and they are lost in the middle. He suggested they have a group game of Marco Polo. 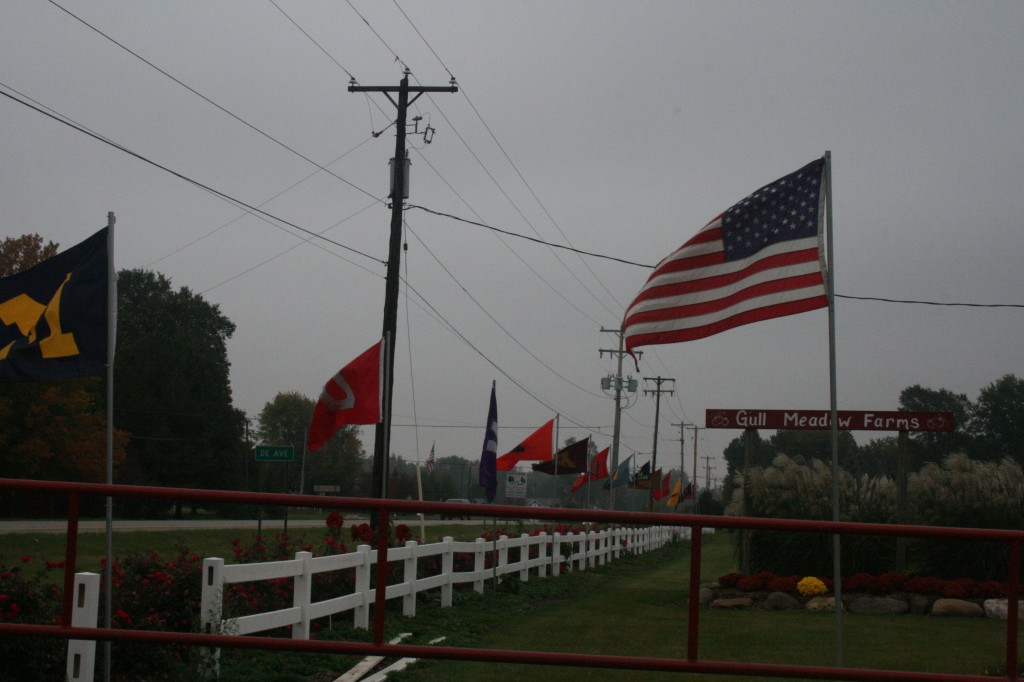 Gull Meadow takes collegiate pride very seriously, plus I wanted everyone to see the beautiful weather, so I snapped one last photo before Mr. MVP was able to find an opening in traffic. 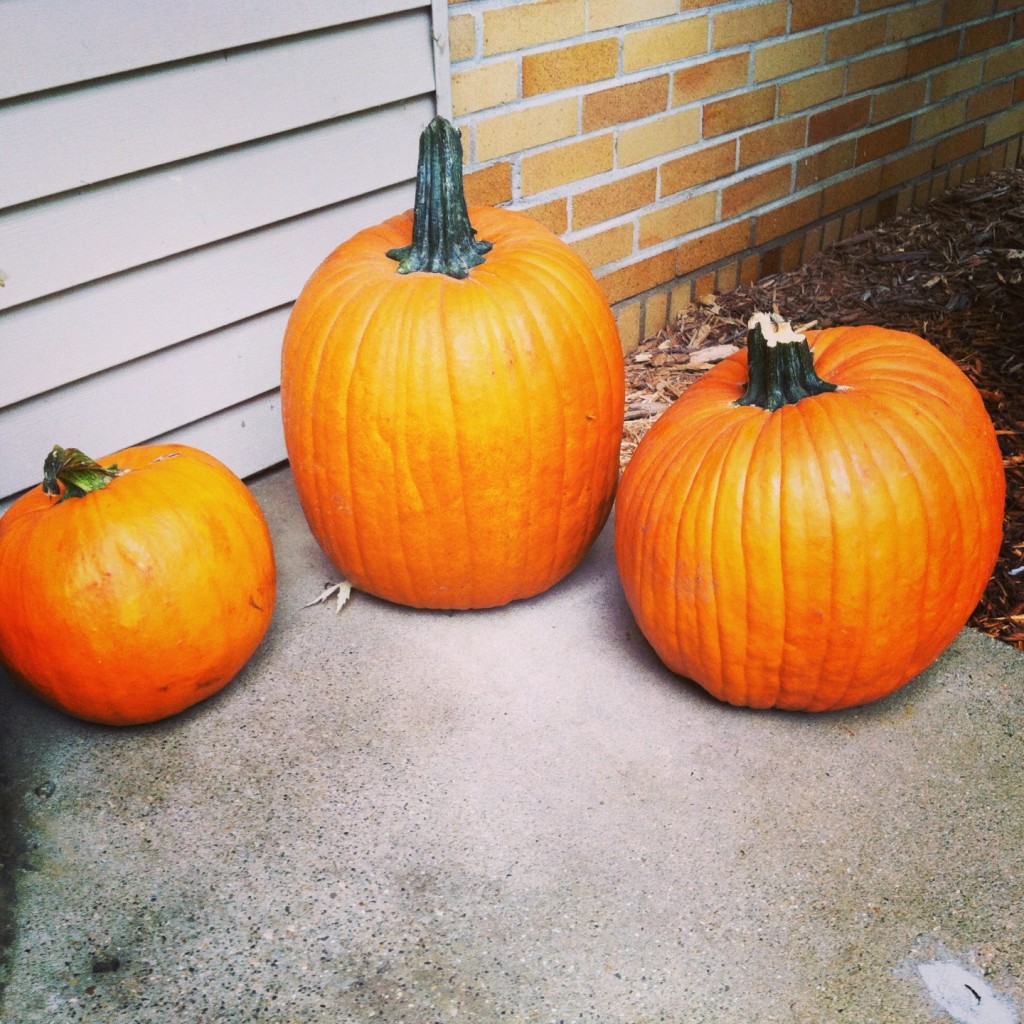 If you’d like to battle the crowds at Gull Meadow Farms their address is 8544 Gull Road in Richland, Michigan. Their phone number is (269) 629-4214. For a schedule of their hours click here, but I’m warning you, Gull Meadow is the busiest pumpkin patch on the planet earth.