Being gluten free and FODMAP friendly is not always the easiest and most exciting way to eat, but November always inspires me to cook. Mr. MVP misses certain foods, but those foods make him extremely unhappy, so there is a reason we discontinued consuming them. Recreating a fraction of those foods in different ways so they are more Mr. MVP friendly can be challenging because gluten free does not always translate to tasty, but the season of baking has hit me and November and pumpkin go hand in gluten free hand. 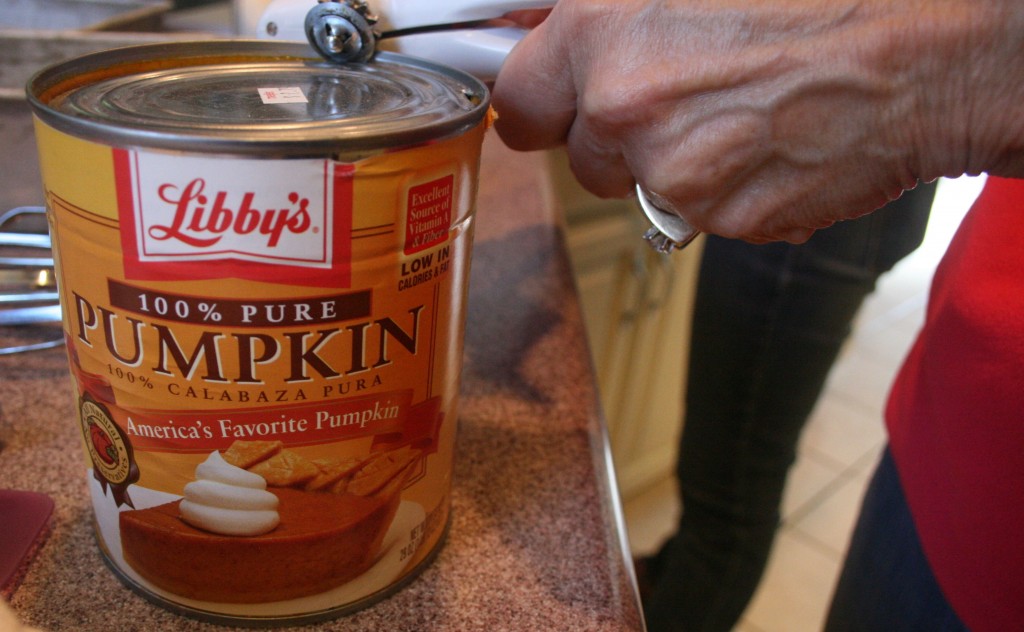 Pumpkin bread is tricky because it can turn out dry, over spiced or just plain tasteless. Adding in the complication of making it FODMAP friendly and gluten free and it’s a serious recipe for disaster. My Mom and I decided to tackle pumpkin bread this past weekend and we were incredibly happy with the results. Mr. MVP was also pleased.

To start with you will need ingredients:

Now, this pumpkin bread is truly nothing fancy. We used a mixer, but honestly you really probably don’t even need that. If you want to make it full of gluten, just use regular flour in place of the gluten free flour. These recipes work both ways. It’s like baking magic. The first thing you need to do is preheat your oven to 350 degrees. On your way back from the oven grab two bread tins and the vegetable oil. 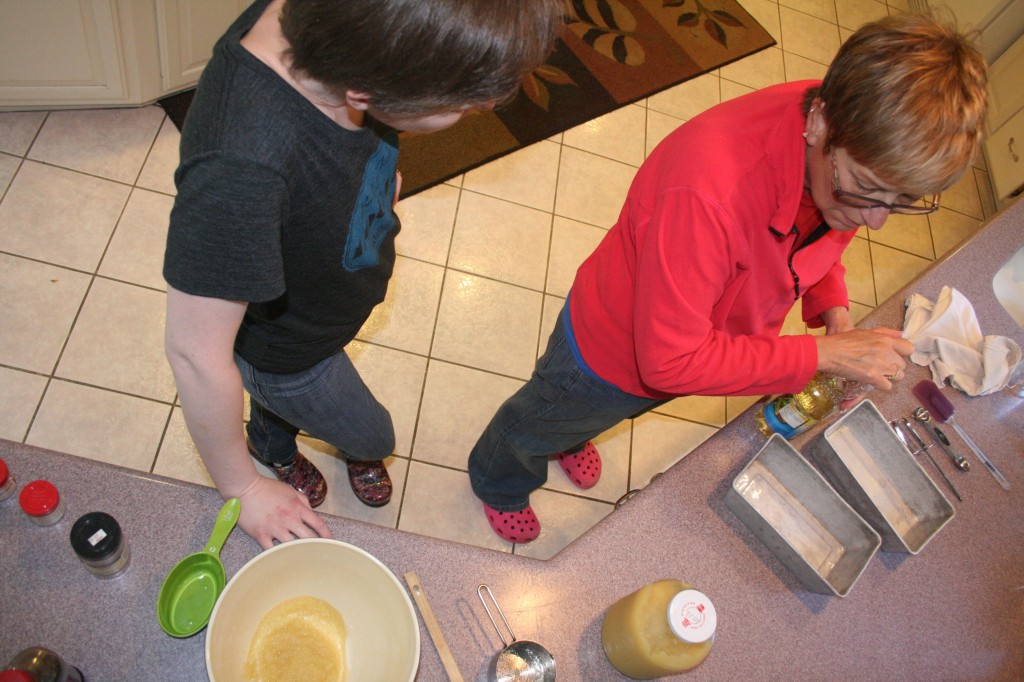 Take your tins and lightly grease them with the oil. I have no idea what my Mom and I are doing right here, but prepping the pans is really simple. Just take a paper towel and rub oil all over the inside of the pan. 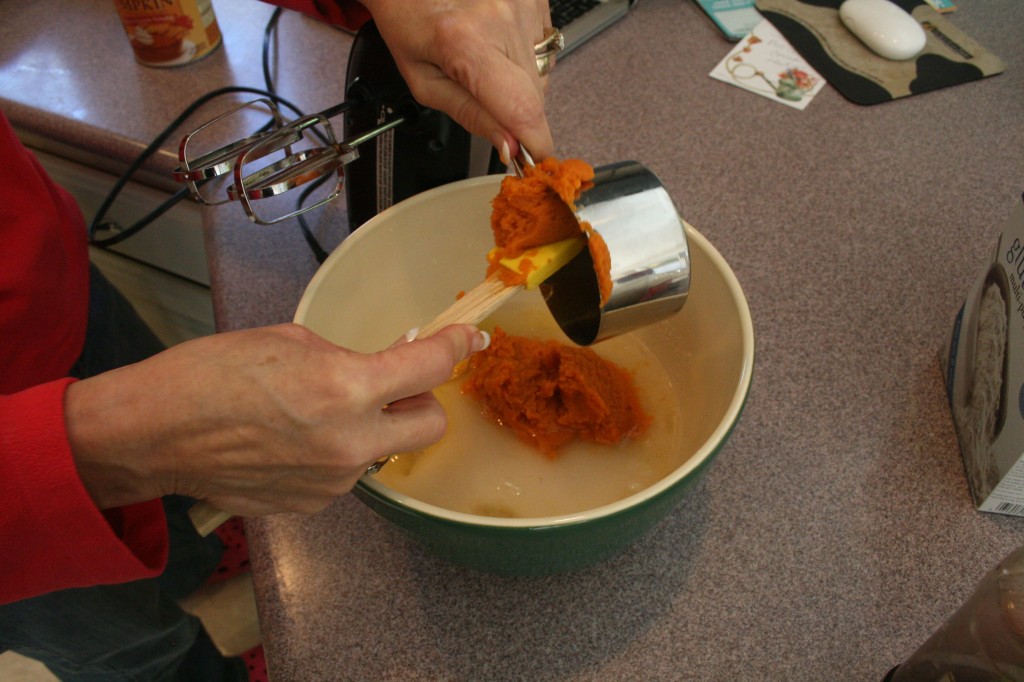 Now that your pans are taken care of, in a large bowl measure out the applesauce, sugar, eggs, pumpkin and water. 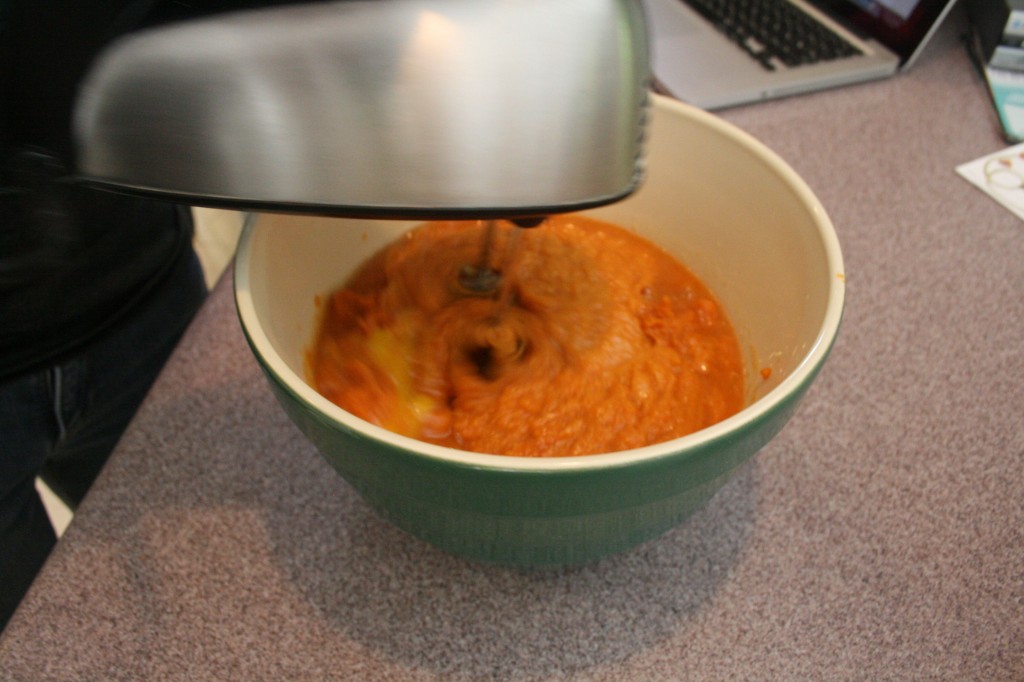 Then using your preferred method, mix everything together. I used a mixer and ended up with pumpkin on my face. 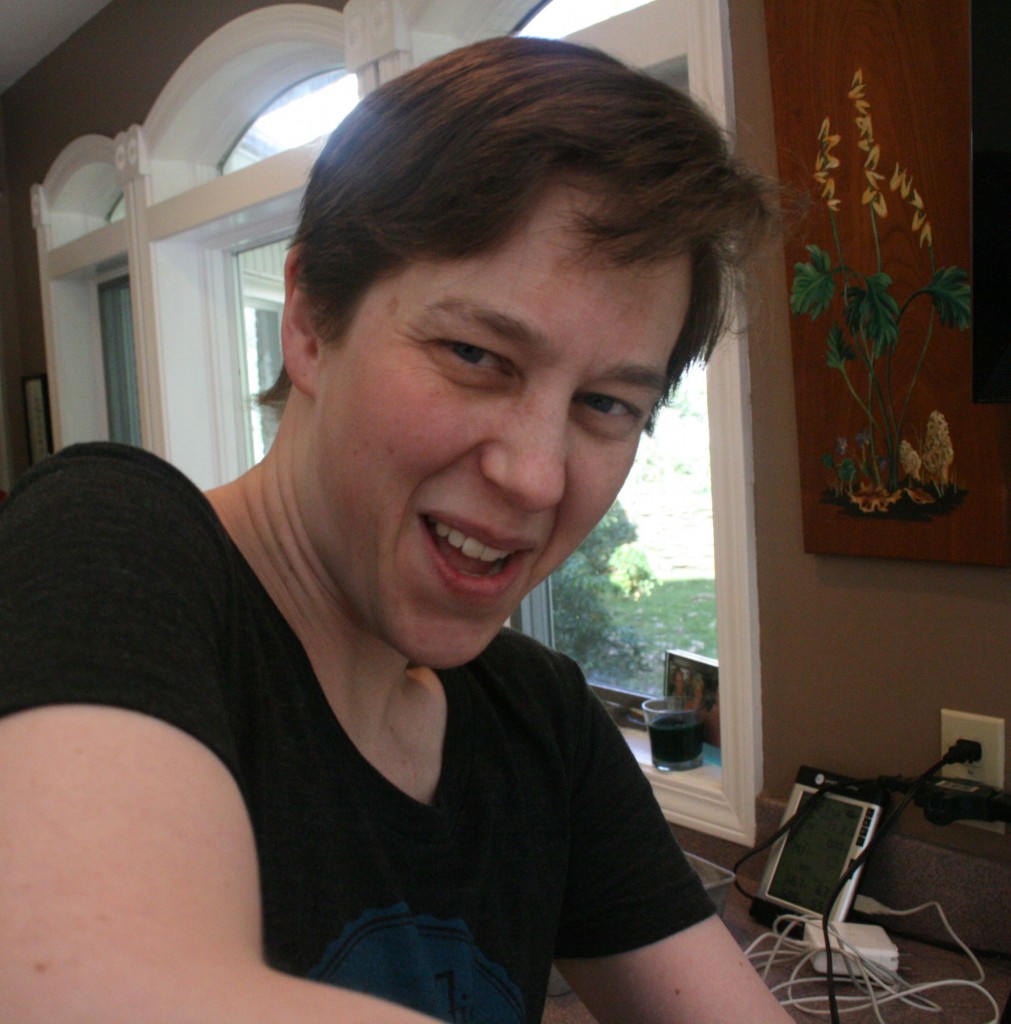 I had pumpkin everywhere. It was orange fun. 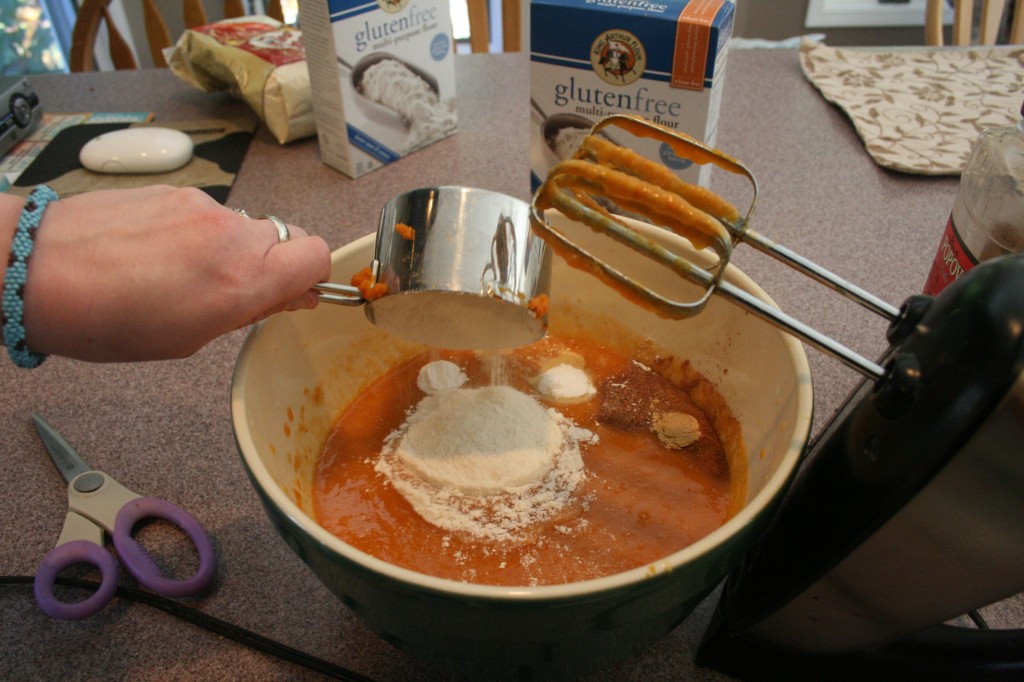 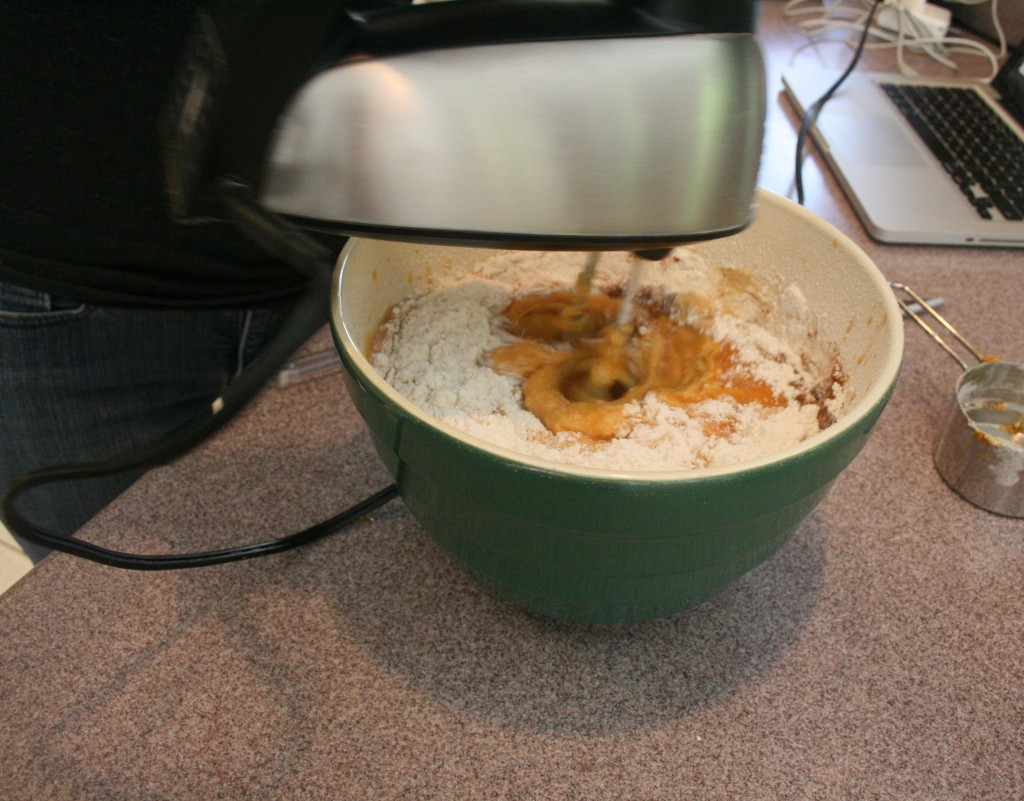 Obviously, the next step is mixing in the dry ingredients. Using a mixer was a little overkill on my part. I recommend a spatula or a wooden spoon. 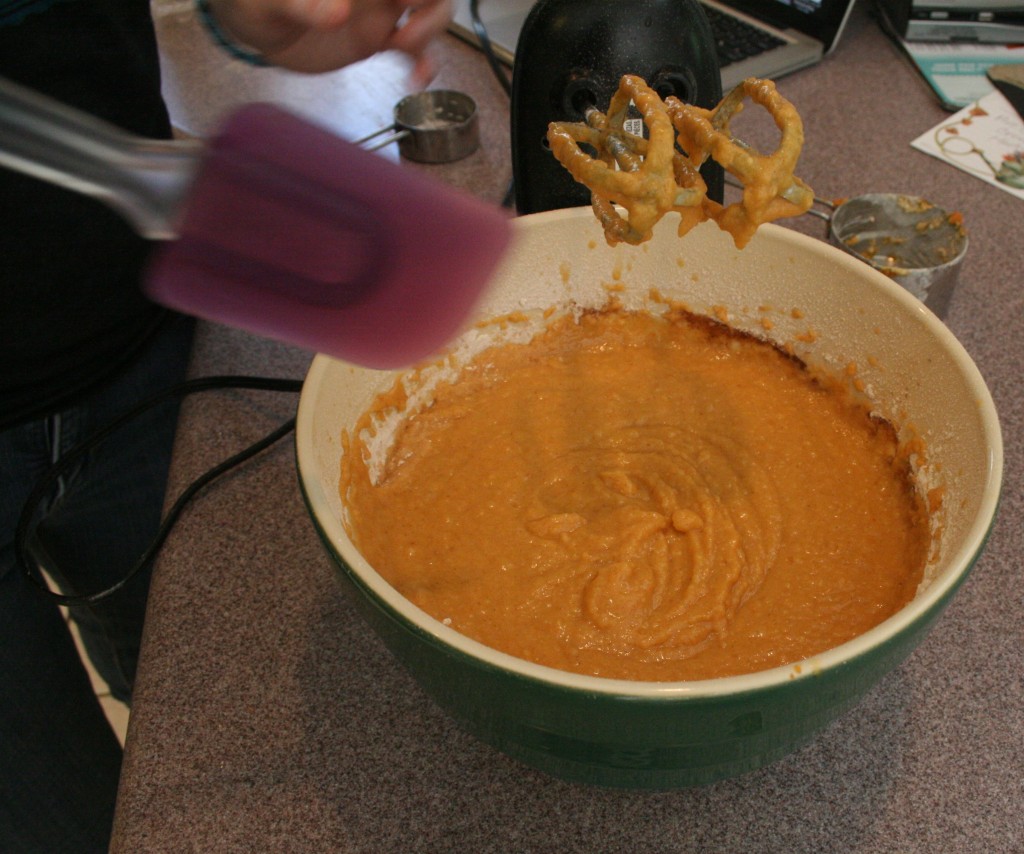 The batter will be loose, but don’t worry. Scrape down the sides of your bowl and keep moving forward because this bread is so incredibly delicious. 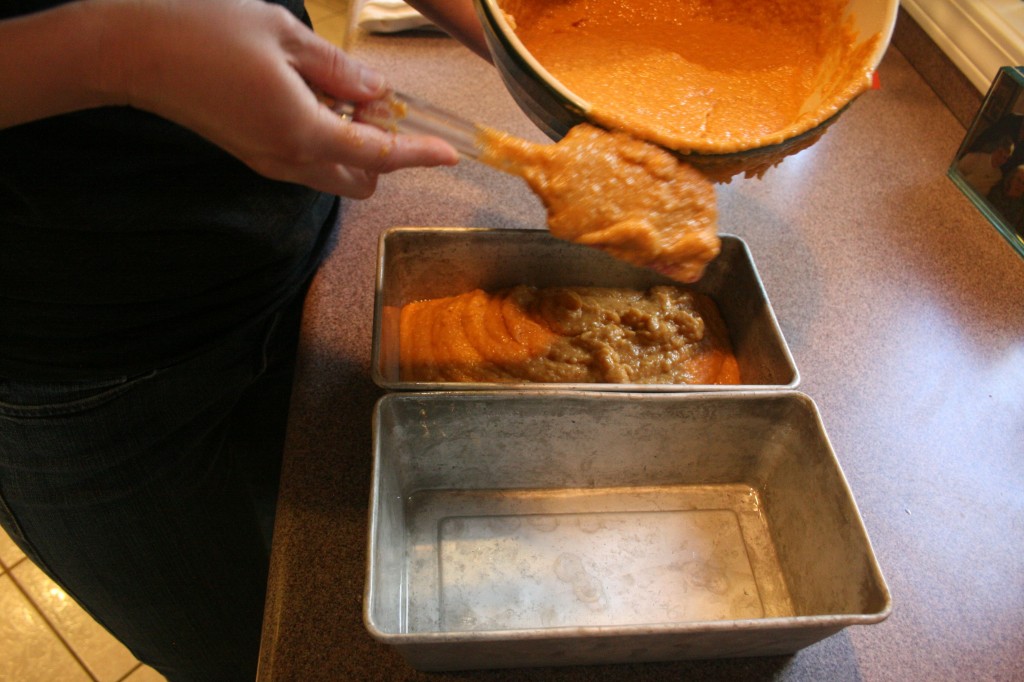 We took a vote and decided to put vegan chocolate in one loaf and keep one loaf plain. I have no idea why they let me measure out the batter for the first loaf because I am terrible at estimation, but I was in charge, so I put what I thought was half in the first pan. 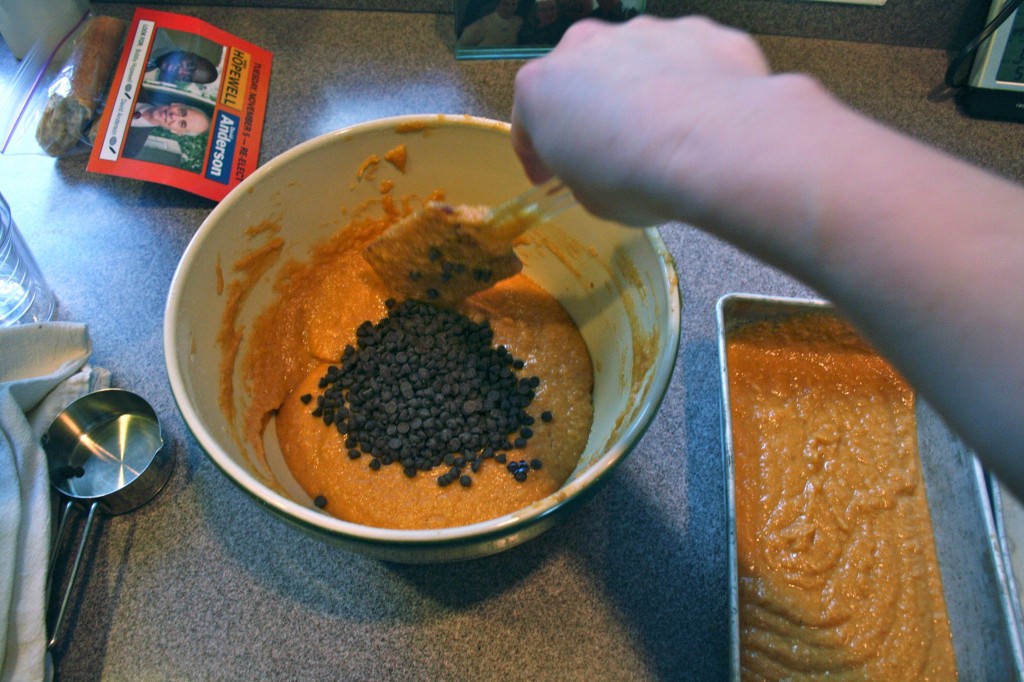 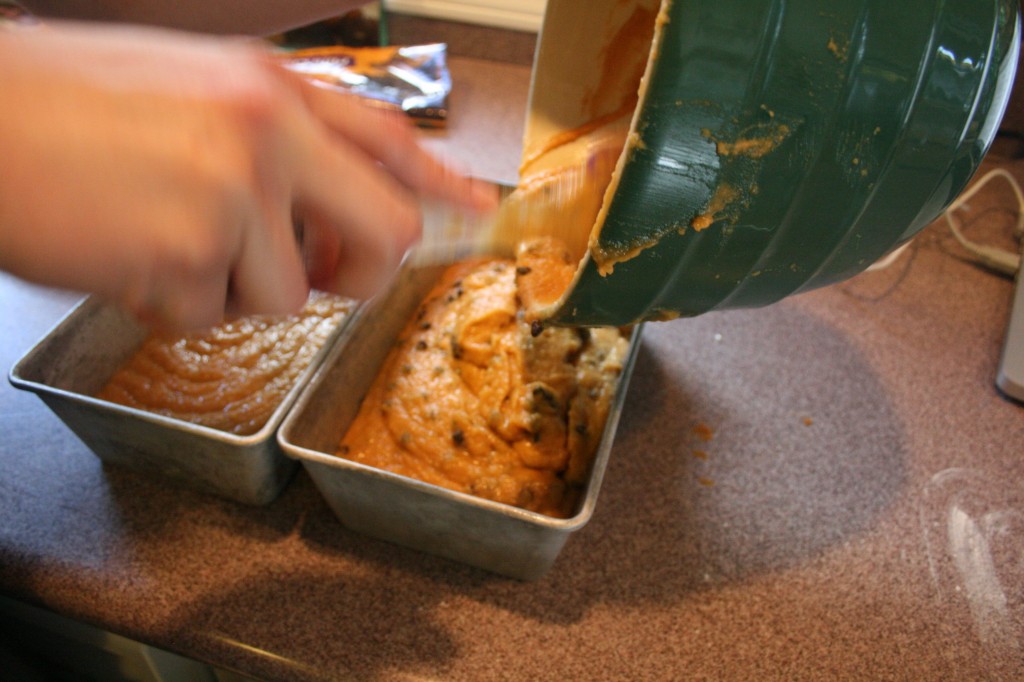 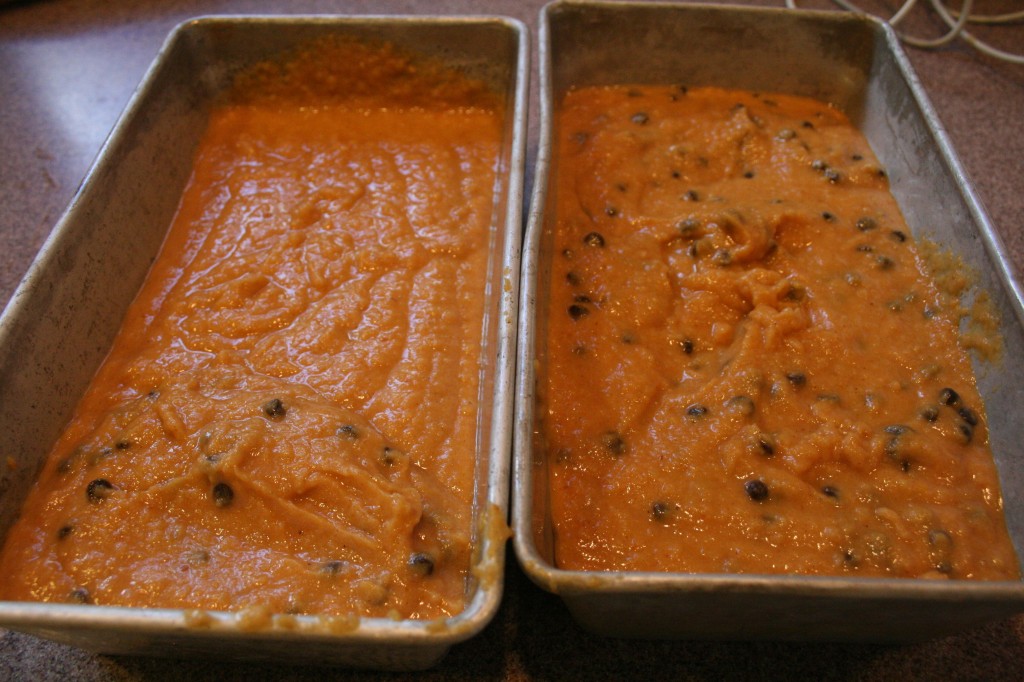 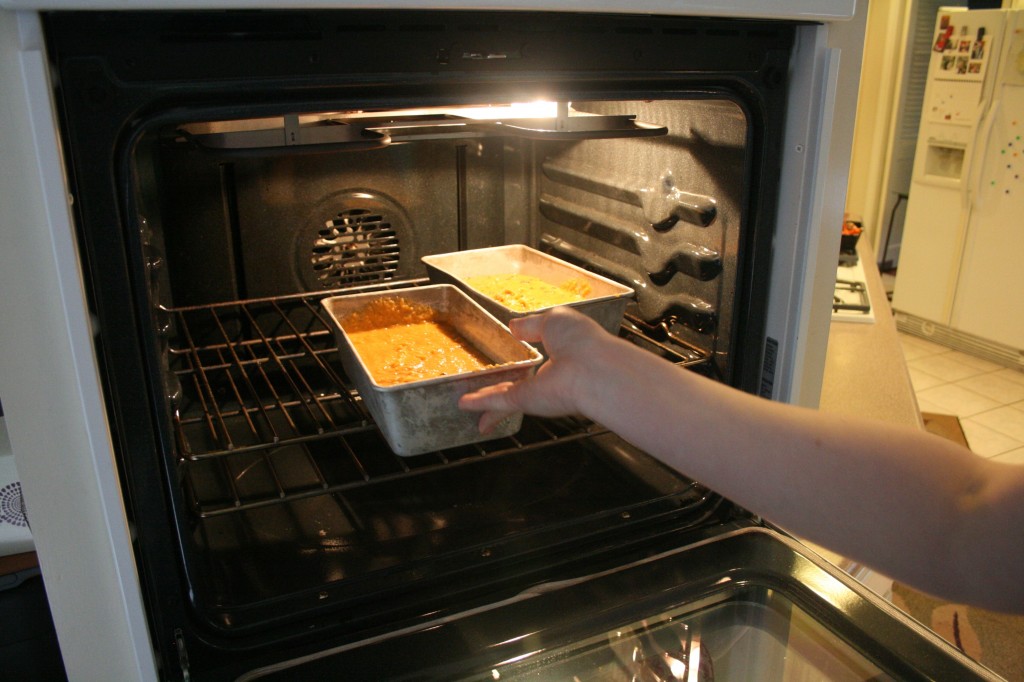 I put the pans in the oven for about an hour. We checked the bread after 30 minutes. 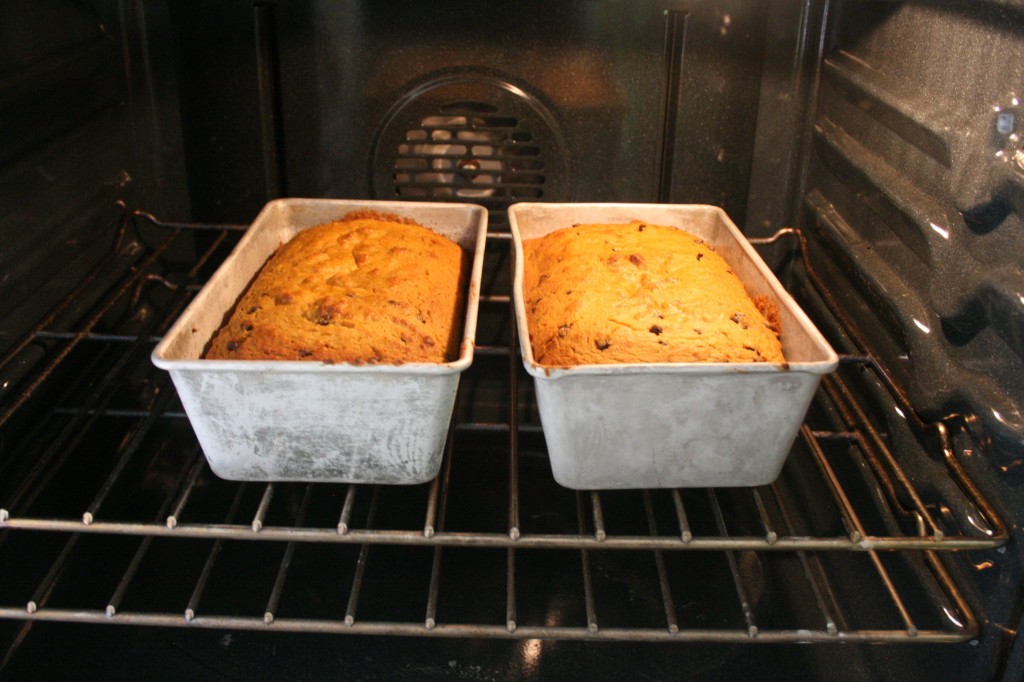 I did not get a photograph, but we did cover the bread with foil at the 30 minute point. This was also at the point that my Dad and Mr. MVP were really winning at Euchre.

#Euchre And #Peanuts With The #Family – #sundayfun #cards #kalamazoo #michigan

After about an hour the bread was finished. 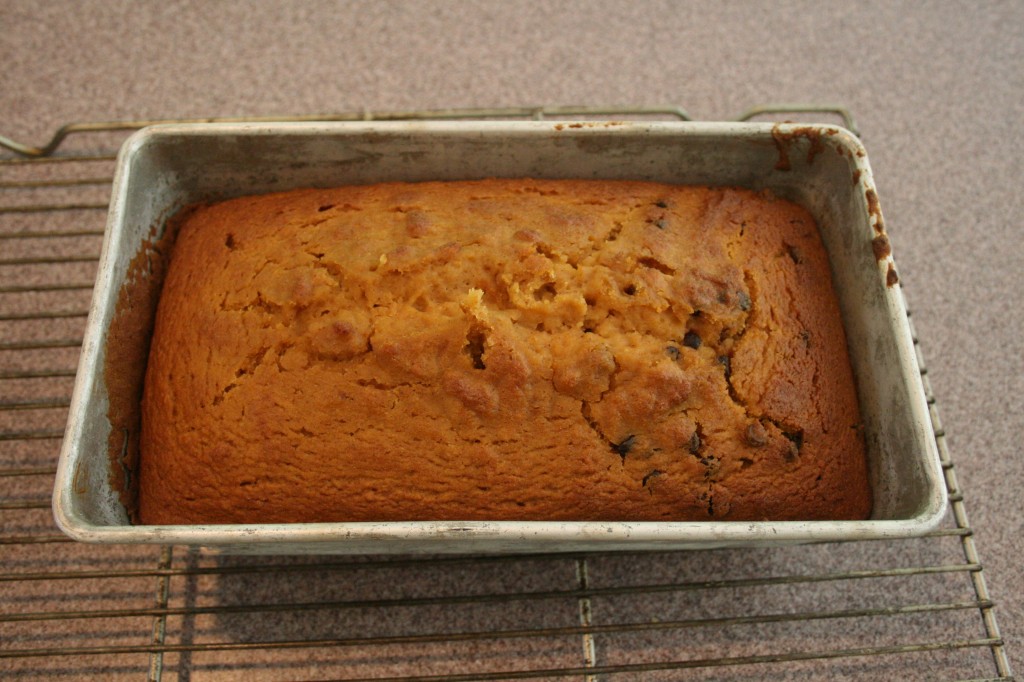 The general agreement was that it was delicious. My Mom enjoyed the vegan chocolate variety, but Team VP liked the plain bread the best. My Dad just liked that there was pumpkin bread. 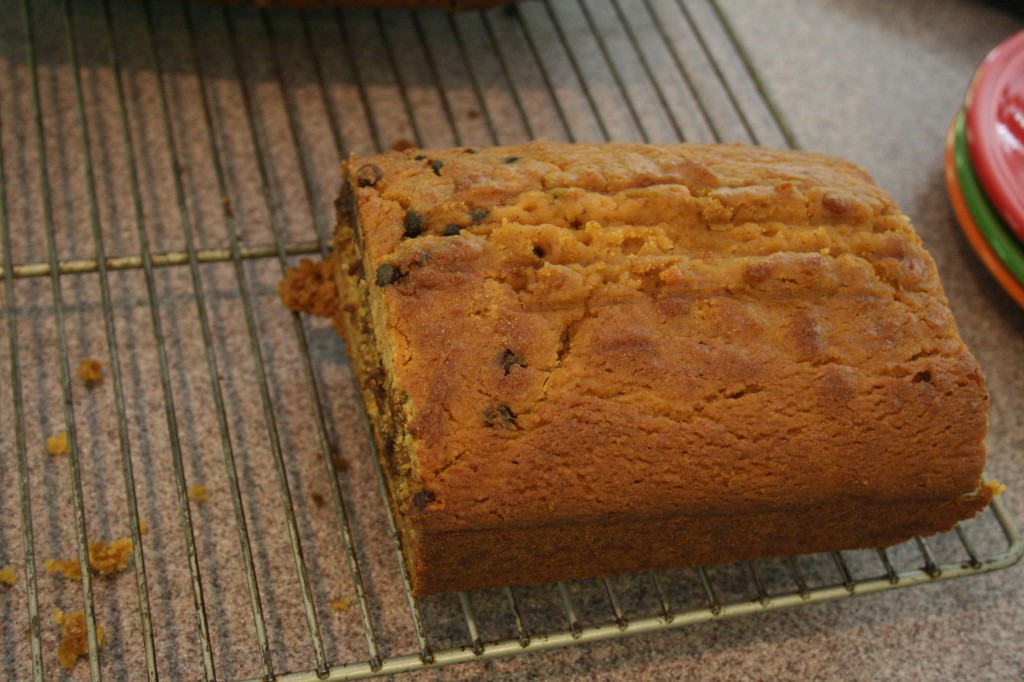 We split the two loaves in half after we each had a piece and this was what was leftover. This is a recipe I will be keeping. I think next time I’ll try it as muffins. I love November.