In September I gave you an update on what I was knitting. For my non-knitting readers I’m sure that post was completely enthralling and I apologize ahead of time, but I’m about to absolutely blow your mind because today I’m going to share my knitting projects again. 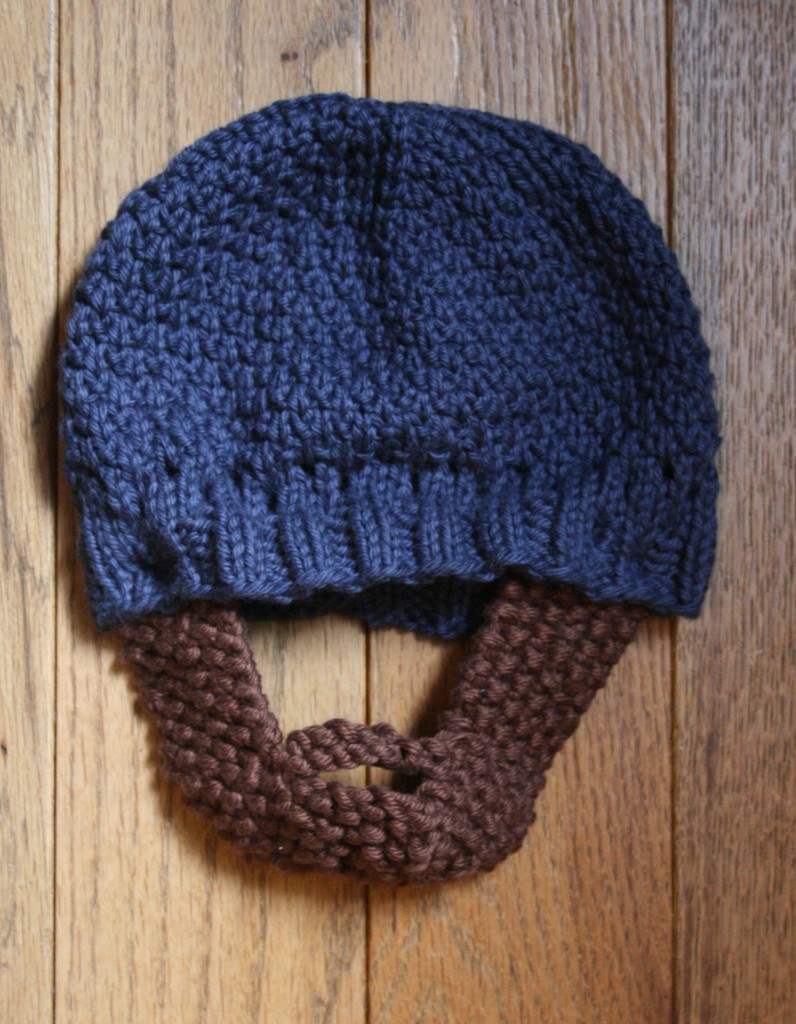 The beard hat is my own pattern that I wrote and knit for one of my very favorite clients of Kazoo Knits. Her grandson needed a beard hat, and I could not find a pattern that I liked, so I set my mind to work making my own. I loathed this hat when it became trendy, but then I knit the stupid thing and I fell in love with it. Everyone should own a beard hat. Beard hats for everyone! 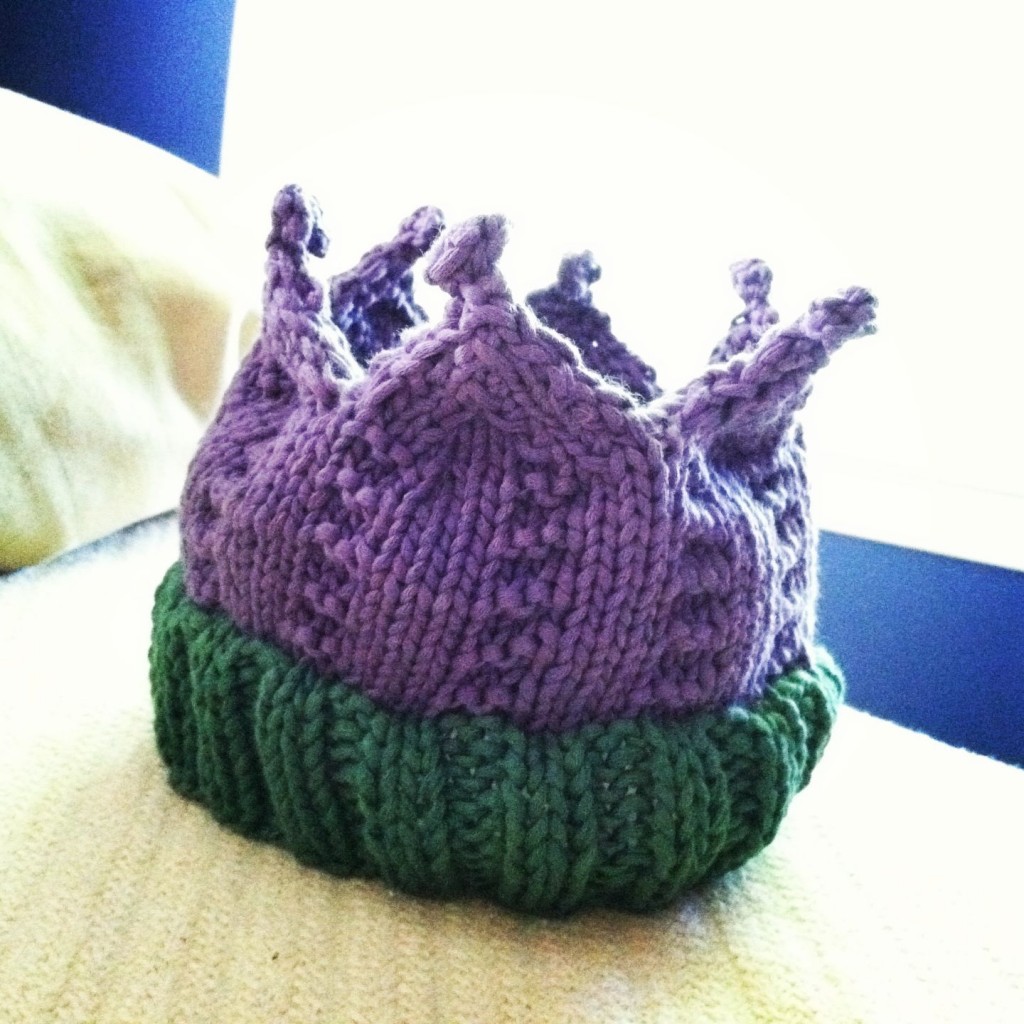 This is a pattern called Loved by Talitha Kuomi. I’ve made upwards of 75 to 100 Loved crowns to give to NICU babies because I’m a firm believer that every teeny tiny baby needs something on their head. The crown above was knit for a friend who is working through the process of adoption with her husband. 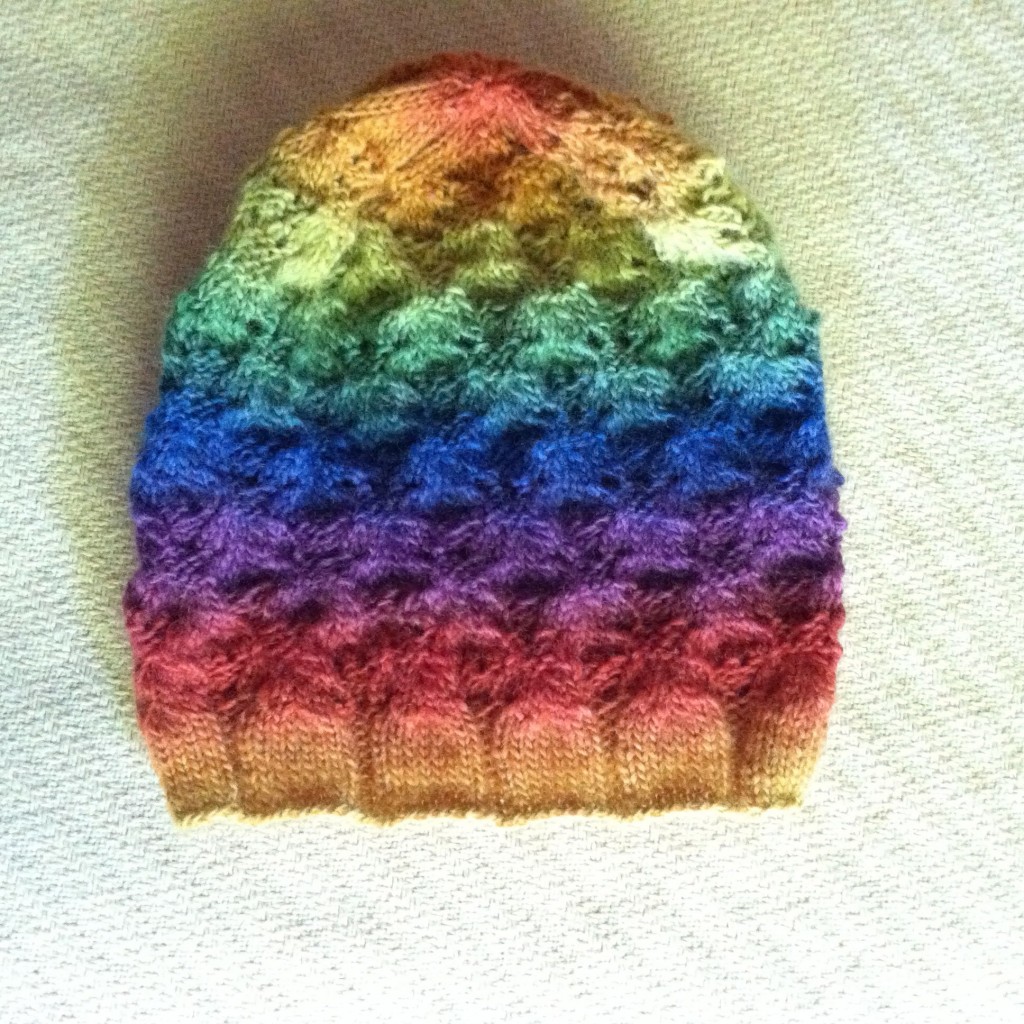 I knit the Sleepy Hollow Hat designed by Irish Girlie Knits with one of my favorite yarns, Chroma Fingering in Prism. The hat and the yarn complement each other perfectly and I was incredibly proud of myself until I finished the project and realized I had crafted an entirely new hat. The lace pattern is not really supposed to wrap all the way around the hat, but as my Grandma once told me through a note in an old mitten pattern, mistakes are simply design enhancements, so the above is my new and vastly more complex take on the Sleepy Hollow Hat. 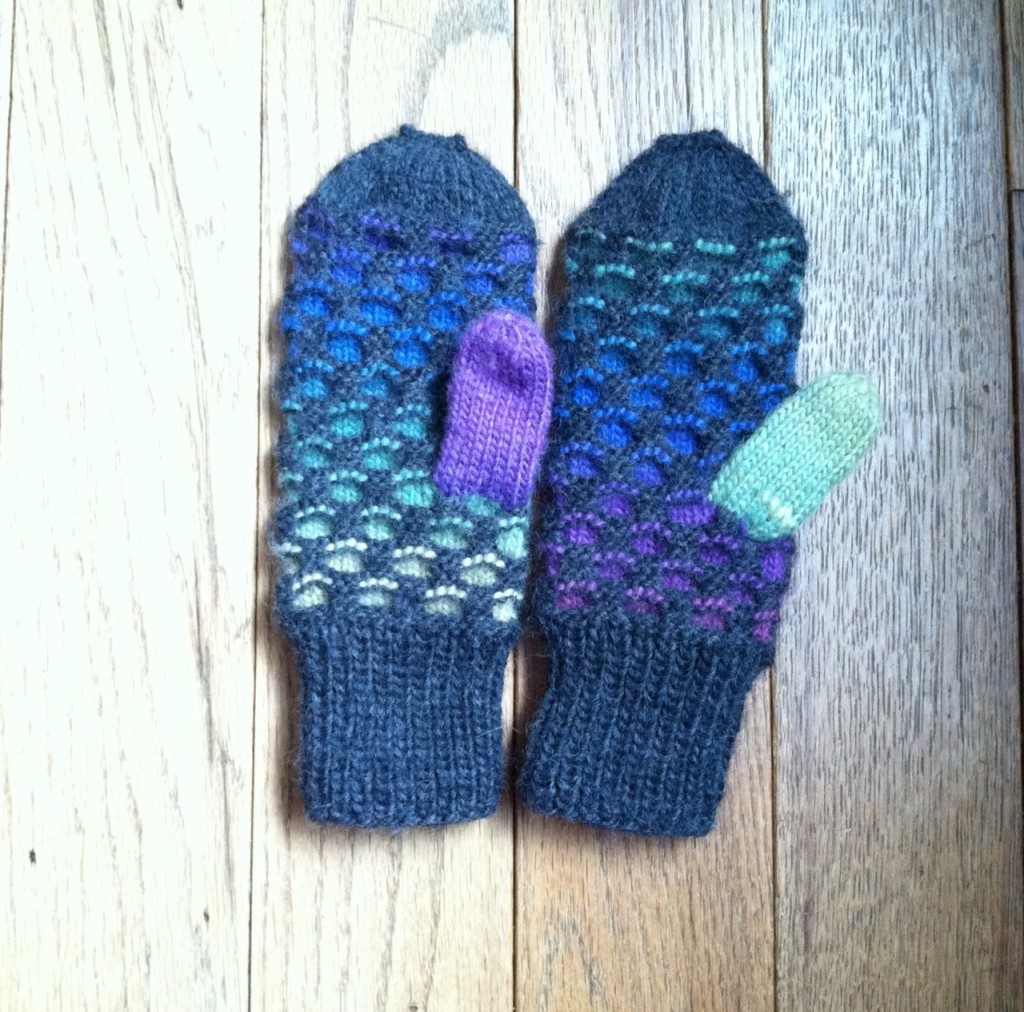 The Newfoundland Mittens I decided to knit myself have been sitting in my knitting queue for almost twelve months. They are supposed to match my Foliage Hat that I knit a couple years ago. The best photo I have of the hat is when I’m riding in the Banana Car:

Anyway, I was using the exact same yarn for the mittens, but obviously my hands are smaller than my head, so the color did not change quick enough, so I was left with three color mittens. I still like them. They are unbelievably warm because they are knit in two layers, which is perfect for Michigan winter weather. 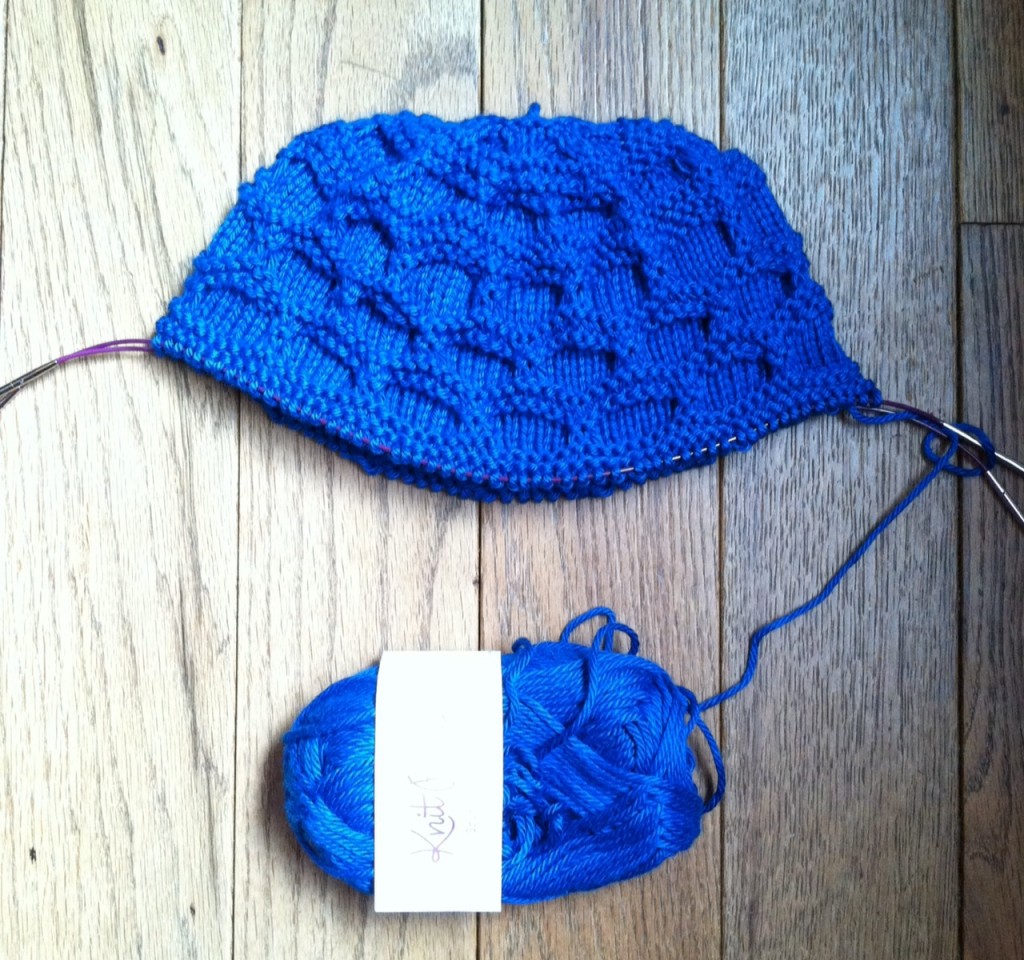 Quest by Laura Nelkin is a hat I’ve knit several times and I’ve found it nearly impossible to photograph. Weirdly enough all three times I’ve completed the hat with Knit Picks Shine worsted. It’s an amazing yarn. It’s easy to care for and it’s warm, but not too heavy. The colors are vibrant and don’t pill, which is essential in hats. The unfinished Quest hat above is for Mr. MVP. 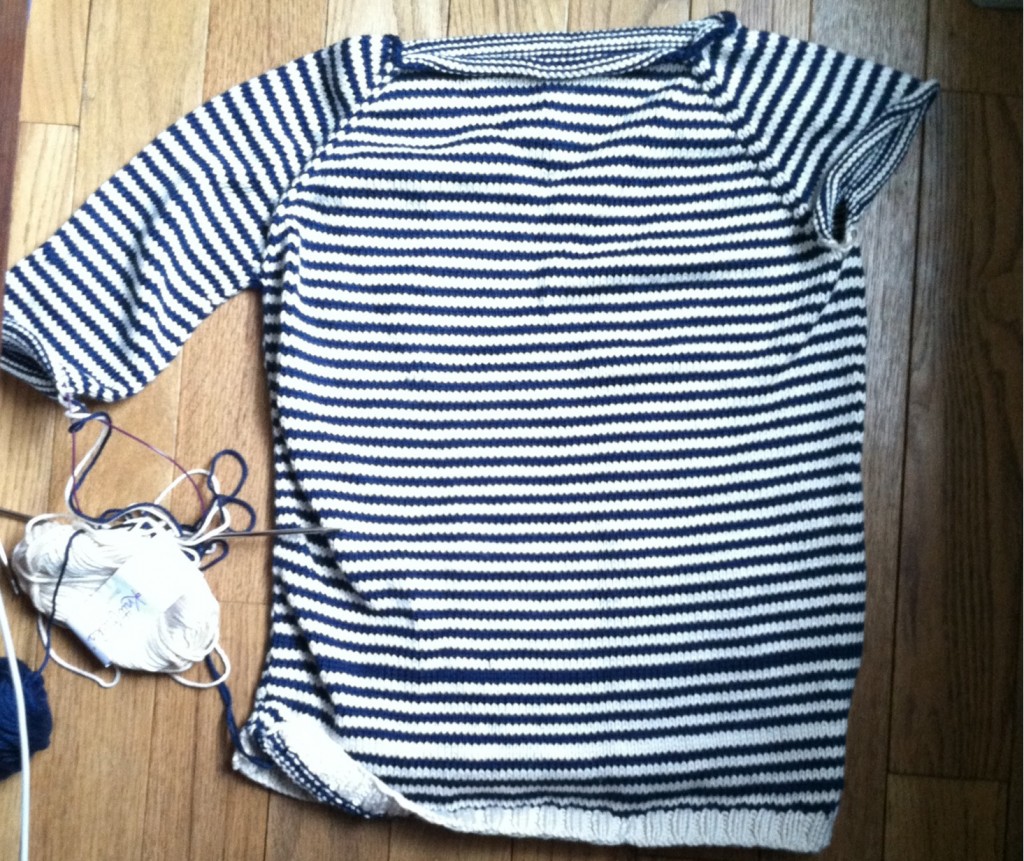 This crazy looking sweater is called Shellseeker by Heidi Kirrmaier. I’m currently obsessed with her patterns. This sweater is the second in a line of patterns I have planned. Typically I would not pick anything with stripes because I’m not an expert at knitting with multiple colors, but the process has been pretty painless. I was even able to put a pocket in the front. If you stare long enough at the picture you can hypnotize yourself with the vertical stripes. Just kidding.