Four years ago we quit cable. I called AT&T and told them to take their $120 per month Uverse DVR and get out. We switched Internet providers, Mr. MVP did some research and we purchased the very first model of Roku streaming device available, signed up for Hulu Plus and Netflix and we haven’t looked back since. A year ago we purchased an Apple TV and last month we upgraded our Roku to the newest model, but our monthly bill for television, movies and music services is still only $14. We are awesome. 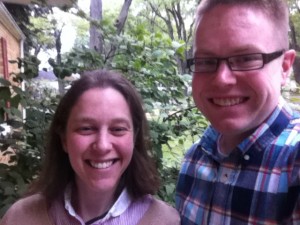 Aside from the initial costs of purchasing a Roku ($99), Apple TV ($99), and yearly Amazon Prime membership ($75), quitting cable is economically fantastic. Back when we quit four years ago the plans were very basic and most major networks’ websites, including CBS and ABC were pretty terrible, but now they are mostly above average. We still have a few issues with CBS, so we sometimes decide to wait until our favorite shows hit DVD and pick them up from the library for free. So, what do we get without cable? I’m here to fill your brain with knowledge! 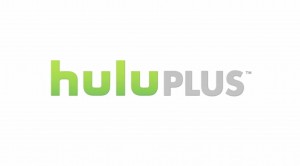 Hulu Plus: Hulu Plus is $7.99 per month and we can create our own DVR type watch list. We have beloved shows that we can add to a favorite list and then can add entire seasons, single episodes, or clips from our computers, iPhones or iPad. Hulu Plus also has over 3,000 movies and the Criterion Collection which Mr. MVP loves.

Hulu Plus allows us to watch original Hulu shows like Battleground, A Day In The Life, and Spoilers. Hulu does a really good job of providing exclusive content like The Booth At The End, EndGame, and Pramface. Although CBS is not available on Hulu, we can watch major networks like NBC, ABC, FOX, National Geographic, SyFy, ABC Family, AMC, MSNBC, CNBC, FX, Walt Disney, Comedy Central, Biography, and Turner Broadcasting just to name a few.

Hulu is available on our iPhones, MacBooks, iPads, Wii, Apple TV, and Roku. Some shows don’t allow viewing on our Roku or Apple TV (FOX!), but we prefer to watch Hulu on our Apple TV if possible because the closed captioning is the best (I’m moderately hard of hearing).

Netflix: We use Netflix for their streaming services, only and pay $7.99 per month. We have unlimited streaming of a library of “hundreds of thousands” of movies and television shows. Mr. MVP and I have created a queue of shows and movies that we want to see or are curious about and then add and subtract when the mood strikes.

Every Tuesday Netflix releases new shows and movies into its collection and we have new material to pick from. I like Netflix because they have an excellent selection of classic movies like Sabrina, Breakfast At Tiffany’s, Funny Face and Roman Holiday (I sense a theme here). They also have all the classic 007 movies which, according to Mr. Bond himself is, “Shocking! Positively shocking!”.

We can watch Netflix on our iPhones, MacBooks, iPads, Wii, Apple TV, and Roku. The closed captions aren’t available on every show and movie, unfortunately, but Netflix does a great job remembering that I like subtitles and keeps them on for me. Watching Netflix on the Apple TV is a little irritating because it doesn’t always remember where we are in the middle of a series, but the interface is always being updated, so there is always hope.

Amazon Prime: We pay Amazon $75 per year to have access to “thousands” of free television shows and movies as well as the option to have free shipping on 15 million different items. Personally, we love Amazon Prime and Amazon Instant Video.

Amazon allows us to create a Watchlist of television and movies that we want to see and they are constantly adding new material to their library. Amazon has a large selection of free television and movies for Prime members, but it also has videos that members and non-members can purchase, either per episode or per movie. Movies are around $3.99 and television episodes are $1.99 each or about $25 per season.

We can stream Amazon Instant Video on Roku, only. Apple does not support Amazon which means our iPhones and Apple TV are out. We can play video on our Macbooks through Amazon.com of course and airplay to our television, but that is a little hinky. One huge thing that makes me crazy about Amazon: almost no subtitles, so I have to crank the volume up super loud, or wear headphones.

Our devices are just as important as our services because without a solid streaming device we would be staring at a blank television screen. Mr. MVP really likes the versatility of having both the Apple TV and the Roku, but sometimes I have a hard time remembering what plays which program the best with captions. Once again, some knowledge for your brain.

Apple TV: Apple TV will play Netflix, Hulu, YouTube, Vimeo, Podcasts and iTunes. It also can access our flickr and Photo Stream accounts and display our photographs. Apple TV would allow me to watch all my baseball games if I purchased a season pass to MLB.com and if I was interested in NBA or NHL I could watch those on Apple was well. There is also a free radio app which is awkward and will work in a pinch, but I’d much rather use Pandora or iHeart Radio.

We can access iTunes through the Apple TV which means we have access to the entire library of television and movies available there. Each show and movie costs something, however, so a trip to iTunes can be expensive.

The Apple TV remote is extremely small. I don’t particularly like it because it’s constantly getting lost and I’m always afraid I’m going to break it if it falls. The buttons are simple, but they don’t stand up on the controller, so I’m always hitting the select button when I want to hit the back button. Apple did a horrible job with this controller. 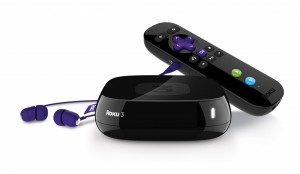 Roku: Roku just got a makeover and we really like it. Our old Roku was a first version and was clunky, but the new Roku 3 is snappy and fun. Roku will play Netflix, Amazon, Hulu, Crackle, Pandora, Flixster, Vimeo, flickr, Weather Underground, The Wall Street Journal, iHeart Radio, HBO GO, Huff Post, BBC News, Smithsonian Channel, CNBC and 750 other channels. We can add channels from Roku.com or from our television. Some channels like TED Talks and NASA TV are free while others like MLB.com and NBA we have to pay for.

To access paid movies through Roku we usually use Amazon because their prices are the best, but the selection of free movies through channels like Crackle is so large we rarely ever purchase movies. Roku has Pandora, Spotify and iHeart Radio which are all free music channels where we can customize music stations and listen all day at no charge. We have been known to have Pandora on for so long at our house she starts wondering if we’re still around.

The new Roku remote is user friendly and the buttons stand up. It’s black and easy to see and I don’t feel like I’m going to break it if it accidentally falls on the floor. One feature I love about Roku is the headphone jack in the remote. Not only can I hook up my headphones during the day when I need quiet music and the neighborhood is being loud, but I can put them in at night when I’m not ready to sleep and Mr. MVP is calling it a night. This one remote design is pure genius.

So, what did we miss without cable? Local weather and urgent news reports when we have severe weather. If I was a football fan I could stream games through NFL Streams, and my local next day news is available online. So, I really only miss breaking news, but honestly even that information can be found on Twitter and websites like CNN and ABC. Just last night we watched President Obama address the nation on CNN only 20 minutes after it happened live on cable and we didn’t have to sit through any commercials.

Really, what do you have to lose by canceling your cable service? The extra money in your pocketbook at the end of each month is a good thing. Being a cable purging guru who knows where to find any show on any streaming device is a neat trick. Having access to a huge new library of movies, television, and music is an adventure of epic proportions. Most importantly, the awesomeness, the supreme awesomeness that comes with being a cable quitter is pretty damn cool.